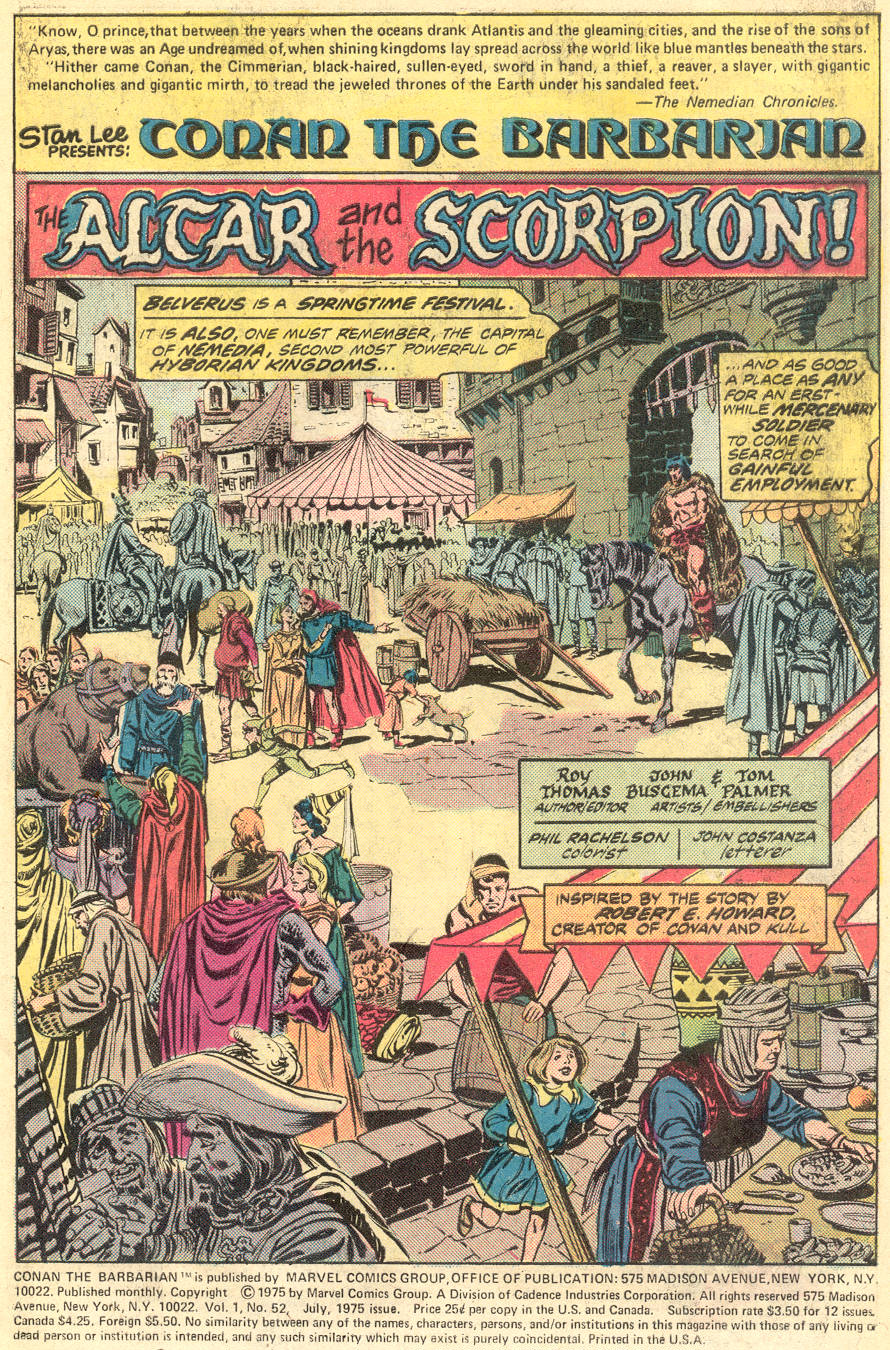 Conan rides into Belverus searching for employment as a sell-sword.
Unfortunately, he arrives just as a wild bull rampages through the
street. A young acrobat first distracts the bull, and Conan finishes it
off by snapping its neck. It turns out the bull was released by Conan’s
old acquaintance Murilo. Murilo invites Conan and the acrobat, who is
actually a girl named Tara, to join his Crimson Company, who are heading
to Ronnoco. On the trip, Conan gains new armor and a spiffy red cape,
and Murilo entertains Conan and Tara with a tale from the time of King
Kull, of a pair of worshippers of a Scorpion God who were attacked by a
servant of the Black Shadow. The servant of the Black Shadow was killed
by the bite of a scorpion despite the power of his magic ring, and the
ring was buried underneath a scorpion shrine in a ruined city. The
Crimson Company has been hired to investigate the legendary city, and
they find the large crystal scorpion shrine. The scorpion comes to life,
of course, but is defeated by Conan, and a passage underground is
revealed. The magical ring lies on the floor of the chamber, and Conan,
familiar with evil magics, warns against touching it. Murillo agrees,
and takes the Company to report their findings, leaving two guards,
Dirkov and Coppolus, behind with strict instructions not to touch the
ring. After three days, the two guards break down and claim the ring,
but both are consumed by a mysterious shadow that grows as it devours
each man… 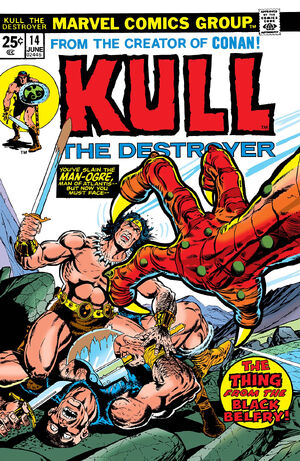 Kull realizes he needs an army to take back his throne. He takes
Redondo and Brule with him to reconnect with the rebel outlaws he used
to run with. They go to a secret entrance where a man named Trantag
blocks Kull’s path despite Kull using the password. Trantag attacks
Kull. Kull kills him. Shortly afterword, an outlaw woman named Santha
arrives. She tells him that the current rebel leader, Sarkoz has sent
her and all women away and has become a priest. Kull and the others
arrive at the camp and find a tall belfry has been erected. Kull tries
to talk sense to Sarkoz but he refuses to listen. In Velusia, Thulsa
Doom tires of the charade of pretending to be King Ardyon as he
continues to require tribute from surrounding lands. That night Kull is
attacked by a singed monster. He barely escapes with his life. He finds
that Brule was wounded by the creature. Brule says Redondo was taken
away and was killed. 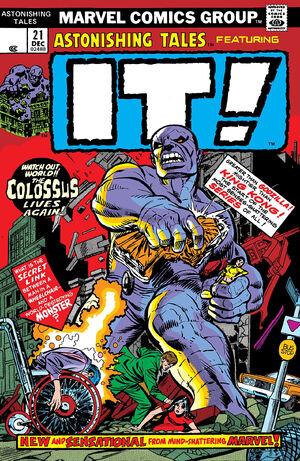 Dick Ayers, the inker for a ton
of Monster stories from the 60s, is the artist for this retro giant
monster mash written by Tony Isabella in 1973-1974. The series was
clearly meant to capitalize on the success of the Godzilla movies (the cover says “Greater than Godzilla! Mightier than King Kong!”; this is
still a couple of years prior to the 1976 remake of King Kong, but the
Godzilla franchise was going strong and there were plenty of imitators
in the film world too; i’m looking at you, Gamera!)

The story
begins with the Hollywood crew that we saw in the the Colossus’ second
appearance back in Tales of Suspense #20. The Colossus itself is still
laying in the middle of the Hollywood lot, it being too big for anyone
to move.

TV producer Dorian Delanzy is upset because he’s afraid
no one will be interested in his show “Star Lords” in a world full of
monsters and superheros. 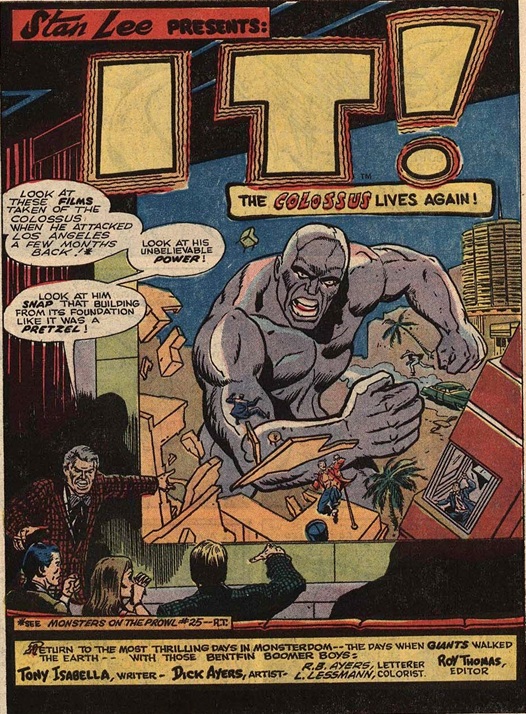 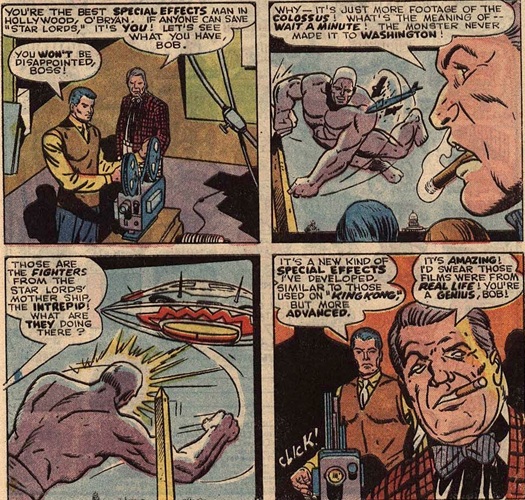 O’Bryan
is already a hero for having stopped the alien invasion in the previous
Colossus story, but i guess that didn’t mean he got to quit his day
job. Delanzy rewards him for his new special effects by making him a
star in the show (which is weird) but the current star Felix Simon has a
solution for that. 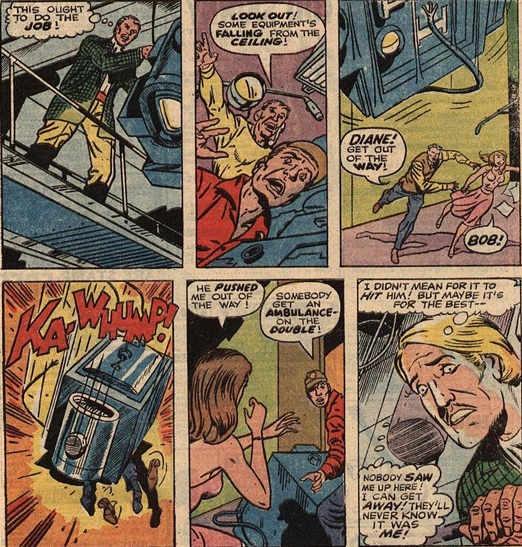 Simon’s
involvement in O’Bryan’s accident goes unnoticed, and i guess O’Bryan
isn’t interested in workman’s comp or lawsuits because “life goes on”
and soon O’Bryan is back to work. He does break things off with his
girlfriend, Diane Cummings.

Although he’s wheelchair-bound, he
soon finds that he can transfer his consciousness into the Living
Colossus. This first occurs when some men, working for a Doctor Vault,
show up at the studio to try to steal the statue. 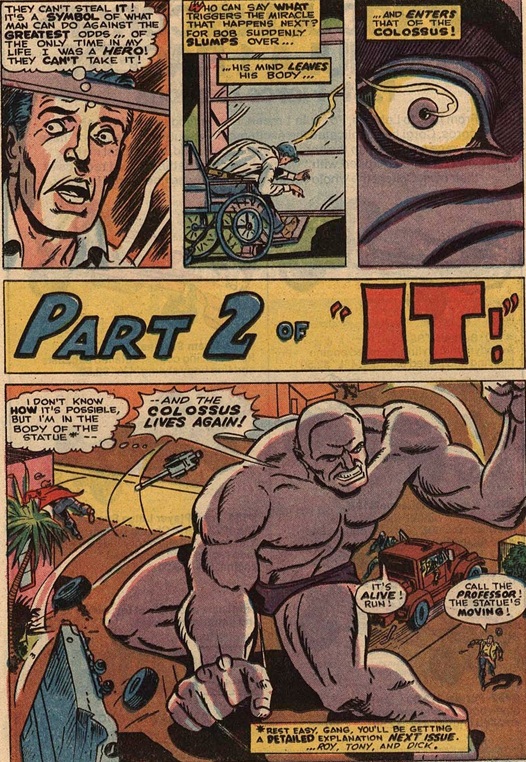 Vault himself has a rare disease, and needs a new body, so he also intends to transfer his mind into the Colossus.

And
to make it more practical, he intends to shrink it down to 8 feet.
However, he only gets to 30 feet when O’Bryan possess it again. 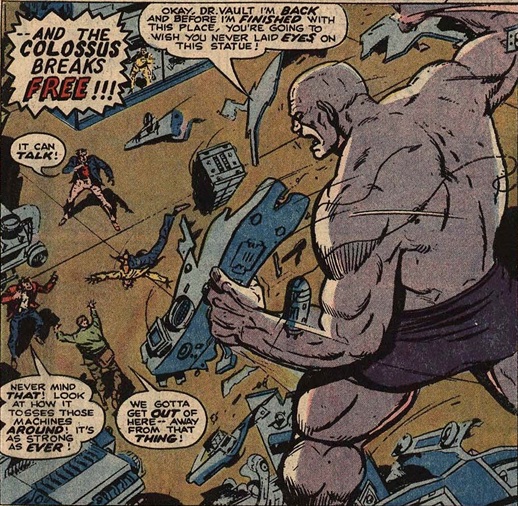 While the Colossus is chasing down Vault’s men, someone names it “It”, so now he’s “It, the Living Colossus”. 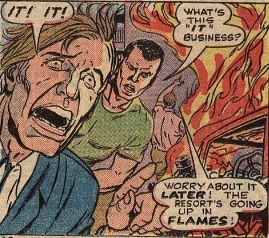 The
behind-the-scenes story behind that name is pretty roundabout. Marvel
had published a story with a completely different “It” in Supernatural
Thrillers #1. That It was a swamp monster created by Thoedore Sturgeon.
Stan Lee decided the name “It” was so great he wanted to make it an
ongoing series. But marvel already had the Man-Thing so they didn’t
need another swamp monster. So Roy Thomas and Tony Isabella scrambled
around for another character they could call “It” and landed on the
Colossus, who had recently been reprinted in Monsters on the Prowl.

So
the first issue kinda sucks, just like the first Godzilla movie is the
least interesting because it’s just Godzilla fighting humans. The
better movies are the ones where Godzilla is fighting other giant
monsters, the more outlandish the better. So things start looking up
when his rampage in the first issue is noticed by a building’s gargoyle. 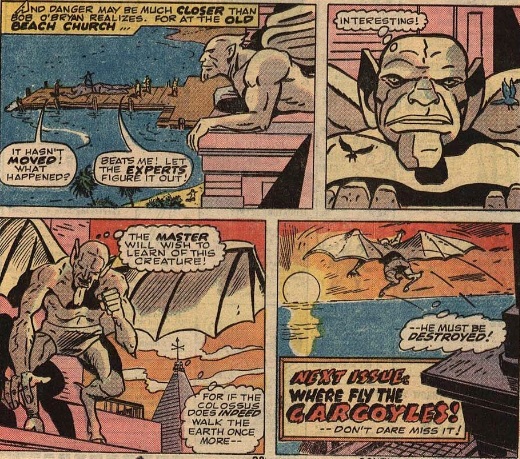