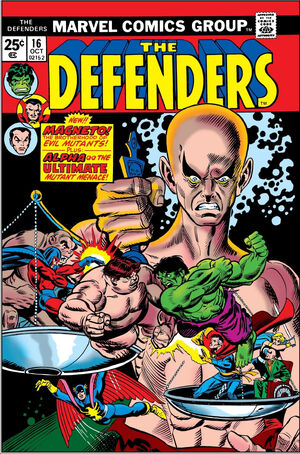 Unleashing his newest creation, Alpha the Ultimate Mutant, Magneto and his Brotherhood of Evil Mutants are able to easily defeat the Defenders and Professor X. Taking the rapidly evolving Alpha to the United Nations Building in New York, Magneto plots to hold the United Nations hostage until Mutants are made rulers of Earth. He uses Alpha to lift the UN building high into the air.

Freeing themselves from the rubble of Magneto’s collapsed base, the Defenders and Professor X travel to the UN and do battle against the Brotherhood. The Defenders are no match for the still evolving Alpha, who’s powers enable it to warp reality. However, when Alpha evolves to a state above that of Mutants, it stops and uses it’s powers to judge which faction is worth punishment. Deeming Magneto and his Brotherhood evil, he reverts them to the age of children before restoring the UN and flying off into space to find his place among the stars. 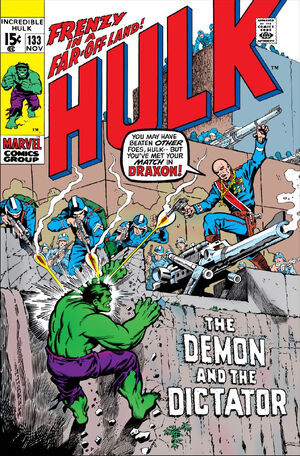 Jim Wilson is seriously injured following the Hulk’s fight with Hydra, and the green monster tries in vein to try and revive the boy when the military arrives. General Ross approaches the Hulk alone and tries to appeal to the green giant, the Hulk is about to smash General Ross when Jim revives long enough to convince the Hulk not to attack and let Ross give him the medical attention they need. The Hulk agrees and is about to walk away when General Ross tries a bid to gain the monsters friendship. However, a trigger happy soldier loses his cool and attacks the Hulk when the monster takes a step too close to the General, prompting the Hulk to attack the military and then flee.

The Hulk ends up in a shipping yard where he seeks shelter in a shipping crate destined for Morvania, and sleeps the entire trip there. The country itself is ruled by a dictator named Draxon who rules the once peaceful nation with an iron fist. During a procession of soldiers, a little girl named asks her father if things were always this way, to which her father — a secret freedom fighter named Isaac — tells her that they were not, and someday things will be as they were in the old days. Isaac is hushed by his wife who fears that one of the soldiers or Draxon himself may hear his treasonous words.

Draxon meanwhile is waiting in his castle for a shipment of components that he will use to make new powerful weapons which he hopes to take over the Mediterranean and then the rest of the world. However, one of these crates is the one which the Hulk stowed away in, and the monster awakens and smashes out of the crate, and is confused about where he is. Daxon offers the Hulk an allegiance, offering him the entire continent of Europe if the Hulk helps conquer the world. Uninterested the Hulk declines the offer and Draxon orders his men attack. The powerful weapons they are using succeed in blasting the Hulk off the castle, but this only succeed in infuriating the Hulk who begins smashing the castle and sending Draxon and his men fleeing. Seeing a rush of soldiers returning to the castle for back-up, the little girl Rachel tells her father Isaac who decides that now is the time for an uprising and leaves his wife and daughter in order to gather the other resistance fighters together.

Meanwhile, the Hulk has cornered Draxon and grabs the dictator, the Hulk tells Draxon that he likes this country and he intends to stay, and warns Draxon to leave him alone or he will smash the dictators empire. The Hulk then leaves the scene, with Draxon vowing to get revenge against the monster.

The Hulk happens upon little Rachel who is playing near a pond and hoping that her father can return home, as when he is around she feels that nothing can harm her. 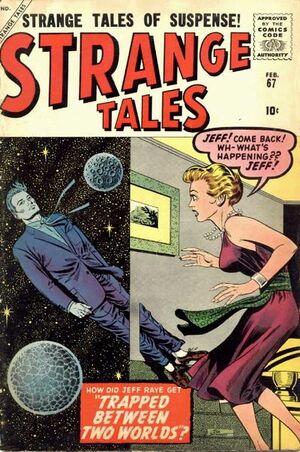 A scientist uses a device that makes the particles of a living body move at the speed of light rendering him invisible to the eye. He conducts a series of stunts in order to build up a name for himself so he can them go public and cash in. After forty days he glances into the mirror that morning and realizes that he has aged forty years during that span. Since he has sped up his body so dramatically, his aging has accelerated in proportion, and he realizes with the little time left to him that he can no longer use his knowledge for selfish gain.