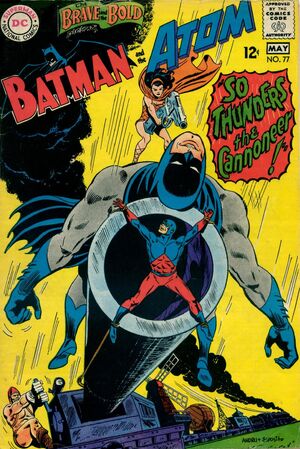 When a train full of priceless artwork is replaced with forgeries by the Cannoner, Batman
goes on a quest to find who stole the priceless works, and enlists the
aid of the Atom. The Cannoner, meanwhile has tricked circus midget Lilli
De La Pooche to take a shrinking pill that shrinks her down to three
inches and blackmails her into helping him stash the artwork until the
heroes are thrown off.

While Batman fights off the circus troupe that is loyal to the Cannoner, Atom
finds Lilli De La Pooche and with the help of circus tall man Big Top,
Batman and the Atom defeat the Cannoner, stop a runaway train, and
convince Lilli De La Pooche to help them find the stolen loot. After the
Cannoner is in custody, the Atom helps Lilli by increasing her size so
that she is the same height as Big Top. 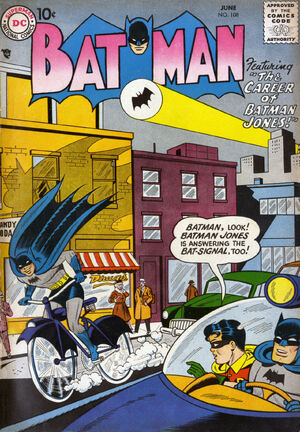 
Batman appears on The Big Quiz program to verify the answers given by
super-contestants Frank Davis, who stands to win $125,000 from correct
responses to questions about Batman’s career. Emcee Joe Harmon feeds
Davis some tough Batman questions, but the contestant answers them all
correctly. Finally, Harmon places Davis in an isolation booth with a
notepad and asks him the question, “What is Batman’s Secret Identity?”
Though Batman blocks off the camera’s view, he is able to see that Davis
has written, “Batman is Bruce Wayne”–only seconds before he collapses
in the booth, and dies of poisoning. Robin notes that the notepad which
Davis wrote Batman’s identity on is blank, and believes someone has
stolen the page with his real name. Suspicion is thrown upon Garth, a
convict brought under guard to appear on a crime program, whose guard
was slugged during the quiz show; Batman encounters a man who appears to
be Garth, but his expert knowledge of the studio layout makes Batman
suspicious. Later, as Harmon hands Batman the question envelope, Walsh,
the owner of the show, confirms that Davis was supposed to have been
asked what the contents of Batman’s utility belt were, not what his
secret identity was. Ergo, the real murderer switched the envelopes.
Batman confirms that the poison was a sort of harmless in liquid or
solid form, but deadly as a gas. Restaging the scene, Batman shoves
Harmon into the isolation booth. Harmon desperately tries to break out,
hollering that he will be poisoned. Batman tells him that he has had
another light bulb installed; the one Harmon had put in, on which he had
painted the liquid poison which became deadly as the bulbs heat
evaporated it,has been removed. Batman points out that Harmon gave
himself away with makeup grease on the envelope he handed Batman–makeup
which he used to imitate Garth, who has since been found trussed up in
hiding. Harmon confesses that he had tried to cut a deal with Davis for
a 50% cut of the prize in return for answers to the questions; Davis
had refused and said that he would expose Harmon after the show. Harmon
pulls a gun, but Robin distracts him by shattering the light bulb
Harmon had poisoned, and Batman kayos him. Later, Batman reveals that
the poison gas bleached out the writing on the page with his secret
identity, so all is well. 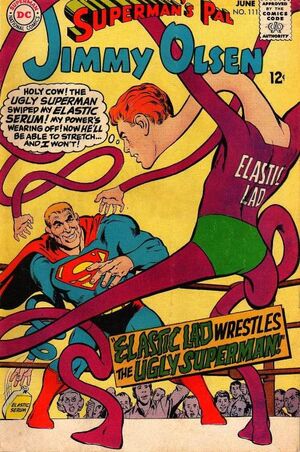 After Jimmy is rejected as a member of Gotham’s Mystery Analysts
club, he gets Robin to allow him to take his place for a few days in
disguise, figuring that pulling off such an imposture successfully will
get him voted into the group.