Conan stumbles across a dying traveler in the desert who begs the
barbarian to take him to a nearby hidden city filled with unclaimed
treasure. Even though he’s suspicious, Conan takes the elderly man,
Libro, with him and tells him to wait on the outskirts of town when they
finally arrive. The ruined city, littered with bones both intrigues and
repels Conan, and he makes his way to a small building containing a
fire and voices. It turns out a group of thieves have found their way to
the city and plan to loot it. One hears a noise outside, and the
thieves burst forth from the door, but Conan is too quick and evades
them. Conan runs into a woman outside, Alonia, the source of the noise,
and the two of them flee the thieves only to bump into Libro. Libro and
Alonia seem to know each other, but Conan is more interested in the pile
of jewels he’s come across. Unfortunately, at that moment the thieves
find him and a battle breaks out with Conan victorious. Clutching his
bag of jewels, he makes his way back to Libro, who summons a great demon
who begins to crush Conan in his giant hands. Luckily, with his dying
breath, one of the thieves plunges a dagger in Libro’s back, allowing
Alonia to make her way to the demon and change it to glass which Conan
shatters. Alonia finds a great diamond in the bag of jewels and reveals
it’s a lifestone that has stored her true form, that of Ishtar, who had
been trapped ages ago by her priest Libro, and she is back to reclaim
her lost city before she vanishes into the stars. Conan looks around at
the jewels and decides not to tempt fate. 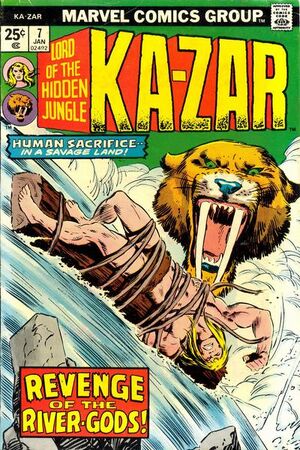 Ka-Zar helps the boy Kem Horkus avenge the death of his brother. 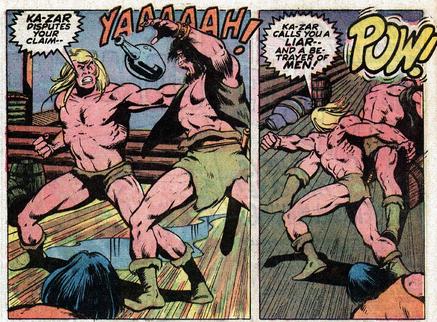 Zabu is seemingly killed in the fight, but Ka-Zar finds his tracks at the end of the issue.

Buscema’s art is nice, as always. Conway’s stories are simpler than Friedrich’s, and for Ka-Zar that’s a good thing.

Thongor was employed as a

mercenary in Thurdis, the Dragon City, but a friendly round of gambling quickly

went sour. Jeled Malkh, a prince of Thurdis and a captain in the army, refused

to pay up, claiming the young barbarian cheated him. Heated words followed a

thrown goblet of wine and soon the two were brawling, then fighting with swords.

Thongor bested Jeled Malkh, only to be tripped as he left and attacked while he

was down. Forced to kill Jeled Malkh, Thongor asked if any other would bar his

way. None offered any resistance, but a guardsman coming through the door behind

Thongor awoke in a dungeon cell where he awaited being tossed to the vampire-flowers. Suddenly,

Thongor found himself face to face with Ald Thurmis once more, who, having

Thurmis’ home city, so he could not be seen with a fugitive, and once more the two went their separate ways.

Running afoul of the city guard, Thongor fled and happened across the Sark (King) of Thurdis’ new flyer. The

barracks’ rumors of a flying machine were true! Deciding there was no reason the

only such ship of its kind shouldn’t belong to him, Thongor scaled the tower to

where the ship was moored intent on stealing it. Slaying the guard, Thongor

stole the ship and cast off. Puzzling out the controls, he set out for the

city of Kathool. Making sure the motors were fully wound, he took a nap. When

Thongor awoke, he discovered that when the motors wound down, instead of

hovering over Kathool, the ship drifted westward with the air currents. He now

floated above the impenetrable jungles of Chush.

Soon enough he was attacked by a Graak (pterodactyl). Tying himself to the ship so as

not to be pulled away by the claws of the ‘lizard-hawk’, Thongor loosed arrows

into its leathery hide, but a blow from the beast’s powerful wings flipped the

floating ship and dashed Thongor’s head against the hull, knocking him

unconscious. The Graak perched atop the upside down ship, its weight slowly

sinking it to the ground, bringing the unconscious Thongor, dangling from his

hastily tied rope, ever closer to the ravening jaws of the Dwark

(Tyrannosaurus), jungle-dragon of the lost ages!