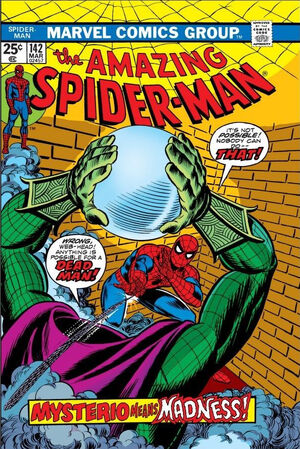 Spider-Man is diving into the Hudson River to try and locate his junked Spider-Buggy. After locating it, he returns to the surface to puzzle over if he’s been hallucinating or if Mysterio is somehow haunting him from beyond the grave. Spider-Man’s musings are cut short when Mysterio appears again, the ghost theory is given more credence when Mysterio appears to be immaterial, and manages to seemingly dissolve once Spider-Man attempts to capture him in webbing.

Returning home, Spider-Man changes back to Peter Parker and gets a call from his Aunt May, who is checking in on how the boy doing in his new apartment. When Mary Jane comes over, Peter suddenly believes he’s seeing the Kingpin appear behind Mary Jane and throws the phone. He then has to come up with an excuse for Aunt May (who’s still on the other end of the line) as well as Miss Muggins and Glory Grant who come up to see what all the noise is. After Peter and Mary Jane appease the irritable Muggins, Glory and Mary Jane introduce each other.

Later as J. Jonah Jameson gets another status report on his latest scheme against Spider-Man, Peter and Mary Jane pop by the Bugle. While Peter discusses business with Joe Robertson, Betty Brant confronts Mary Jane about her feelings towards Peter. MJ explains how things are changing, but she’s worried about how Peter is acting. The conversation is lightened up when Betty and Ned Leeds announce that they’re getting married. Later, returning Mary Jane home, Peter thinks he sees Gwen Stacy, and chases after her. When he doesn’t see her outside the building, Peter chalks it up as another hallucination. 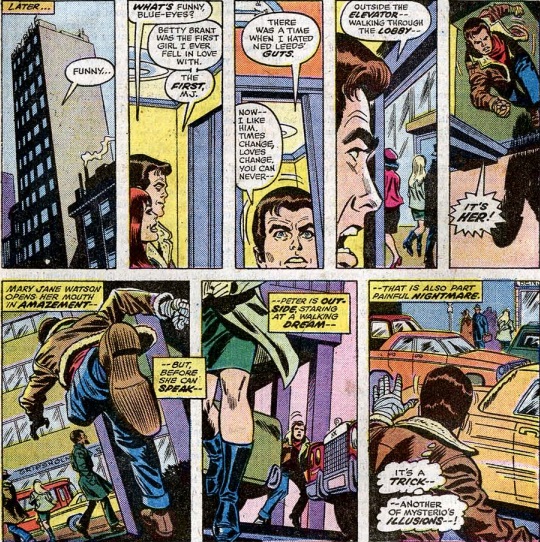 Peter finally realizes the truth when he discovers an image inducer device on his Spider-Man costume. Furious that someone is toying with him, he realizes that just because the real Mysterio is apparently dead, doesn’t mean someone else hasn’t taken up his old identity. Building a tracking device, Spider-Man tracks down this new Mysterio and easily defeats him in battle. He reveals him to be Danny Berkhart. Berkhart explains that he was an old cellmate of the original Mysterio and decided to take up the identity to defeat Spider-Man for his old buddy. With the mystery solved, Spider-Man leaves Berkhart for the police and chalks all the weirdness up to his involvement.

Finally at the Daily Bugle, J. Jonah Jameson gets a call from Berkhart who has been picked up by the police. He tells Jameson that if he doesn’t get a good lawyer, he’s going to expose Jameson’s hand in this latest plot to get at Spider-Man. Worried about the implications he’s involved in, Jameson flees the office telling Betty Brant that he’s going to France. 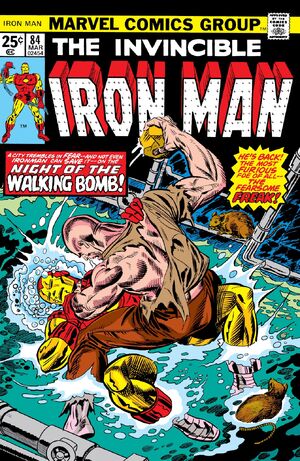 Happy is hospitalized: his life in danger. Iron Man flies the
enervator to the hospital, knowing that it has turned Happy into the
Freak in the past but hoping that by exposing Happy to its effects he
will heal. Dr. Ritter performs the operation, but the enervator turns
Happy into the Freak again. Detective O’Brien talks to an officer
involved in the investigation into his brother’s death, but is
unconvinced when told Stark and Iron Man aren’t responsible. Iron Man
and Dr. Ritter search for the Freak, finding him in the hospital’s
cobalt storage room. Having absorbed the cobalt radiation, the Freak has
become a walking bomb. While Dr. Ritter evacuates the hospital, Iron
Man fights the Freak. The battle spills outside where the Freak uses a
wrecking ball and crane as weapons before destroying a police
helicopter. He then grabs Iron Man, his radiation fusing the Golden
Avenger’s circuits.