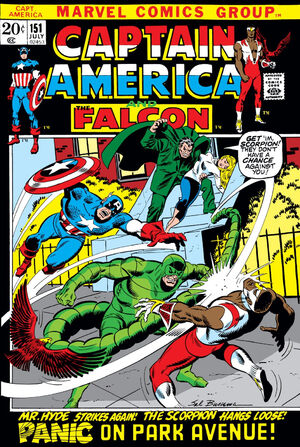 We
see Scorpion and Mr. Hyde lurking outside of Sharon’s window at the end of last issue while
she and Cap are making out. We saw robot versions of them during the
Mr. Kline arc in Daredevil 82-83 (in Italy in DEVC # 81-82); these issue shows what happened to the
originals and brings them back for a fight against Captain America. 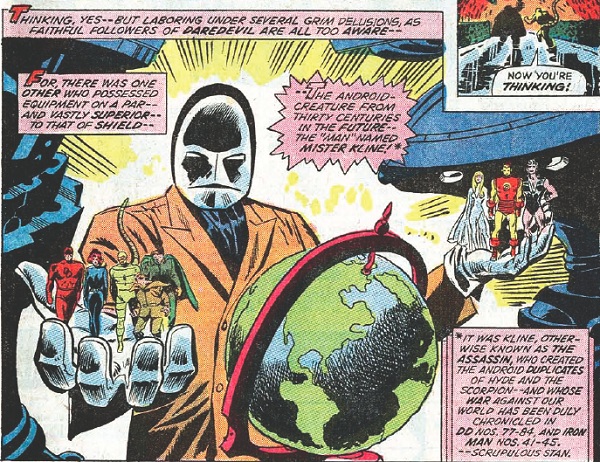 We learn
that Mr. Kline did indeed have the actual Scorpion and Mr. Hyde in
captivity while he was using the robot versions. In a flashback, we see
the Scorpion escape… 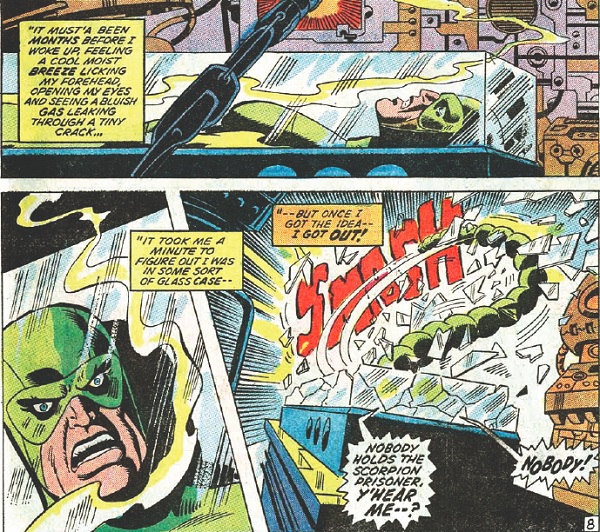 …and he frees Hyde as well. Neither knows what’s going on, and eventually they
get it in their heads that SHIELD was using them as guinea pigs for a
new super-villain prison.

So they decide to capture a SHIELD agent. On their way there, they run into Steve Rogers while he’s in his civilian ID… 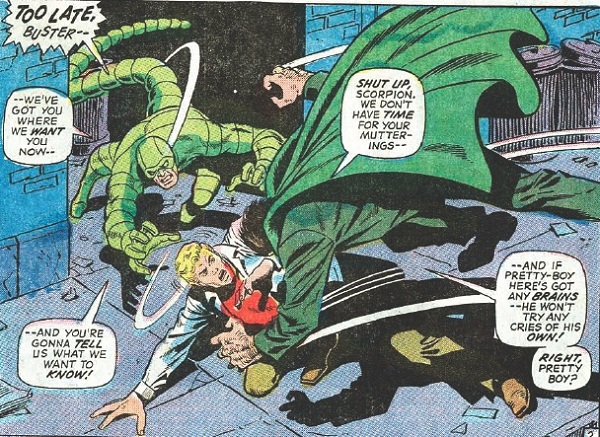 …but he manages to fight them off very well .

Captain America and the Falcon catch up with the two villains outside of Sharon Carter’s dormitory. 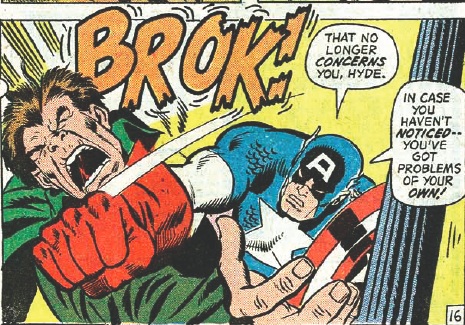 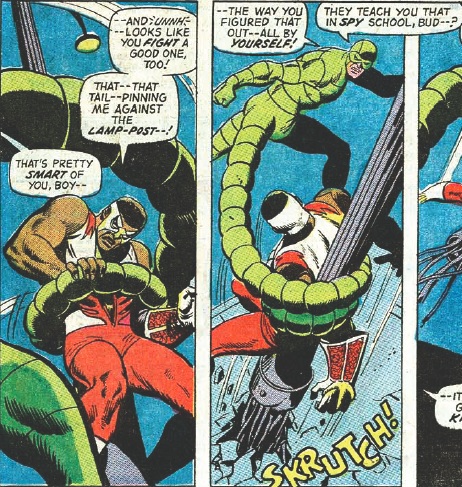 Despite
having the upper hand for most of the fight, they fail to prevent
Sharon from getting kidnapped. Nick Fury shows up to gripe about it,
but Cap isn’t in the mood. 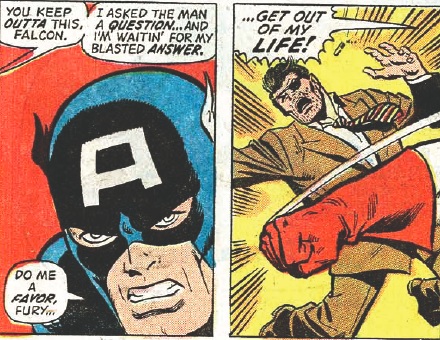 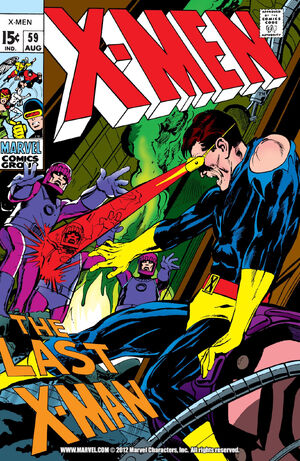 Cyclops, Beast and Marvel Girl are using a mini Cerebro unit to
track down all of the mutants that have recently been captured by Larry
Trask’s Sentinels. However, their jet-car is blasted out of the sky
causing the three X-Men to fall to their doom, but they are rescued at
the last minute by Jean’s telekinetic powers.

While in the secret hideout of the Sentinels, it has been
revealed that Larry Trask, ironically, is a mutant himself, a revelation
that is learned when the medallion given to him from his father was
accidentally removed and turns out to have nullified and shielded his
mutant powers from the Sentinels scanners. This is confirmed by Judge
Chalmers who knew the truth all along and explains that Larry’s father
the late Bolivar Trask created the medallion after Larry’s mutation
precognition powers foretold his mother’s death. With the Sentinels no
longer following his orders now that he has been outed as a mutant, the
Sentinels carry out Larry’s last command as a “human”, to capture all
the remaining mutants and destroy them.

In rapid succession, the Sentinels seek out and attempt to
capture the remaining mutants left in the world. They find opposition
when trying to capture Quicksilver, Scarlet Witch and Toad; however
easily manage to capture Mastermind, Blob and Unus. While Judge Chalmers
begins to consider what to do about this situation, not wishing to be
party to the genocide of all known mutants, the Sentinels detect a
concentration of mutant energy signatures. This turns out to be Cyclops,
Marvel Girl and the Beast who are now scaling the mountain which hides
the Sentinel base. They are opposed by Sentinels which they easily
defeat and manage to break into the Sentinel base.

Inside, they hide as a Sentinel prisoner craft arrives with the
captured Quicksilver, Scarlet Witch and Toad. Realizing that the
Sentinels are conditioned to deal with any given mutants threats by
identifying who they are, the three X-Men trade costumes with the former
Brotherhood of Evil Mutants members, Cyclops taking Quicksilver’s
costume, Marvel Girl taking Scarlet Witch’s and the Beast wearing
Toad’s. When the Sentinels that captured the three other mutants attempt
to take them to the holding chambers they are caught off guard.
Confused by the unique costumes and not prepared to deal with different
powers, the Sentinels fall easily to Cyclops, Marvel Girl, and Beast’s
counter attack on the Sentinels.

As this is happening, Judge Chalmers awakens Larry Trask from his
suspended animation. Larry has a vision of Havok getting injured in the
coming battle. When Chalmers asks what he can do to stop the Sentinels,
he traces Larry’s glance at the device he used to neutralize Havok’s
powers earlier, however Chalmers misinterprets Larry’s attempts to tell
him what the gun is for as an order to kill Havok, which Chalmers
refuses to do.

Cyclops and the others fight their way into the main chamber just
as the Judge realizes what the gun is really for and uses it to
reactivate Havok’s powers. Realizing what Chalmers has done, the
Sentinel in the room blasts him before Cyclops can attempt to destroy
it. Cyclops then blasts open the cyro-tube that is keeping Alex in
suspended animation. Now free, Havok turns his powerful cosmic energy
blasts on the Sentinel.

As the Sentinels begin to administer the Judge first aid as part
of their programming to protect humans, Chalmers tells Cyclops that the
only way to beat the Sentinels is with logic. Cyclops then suggests to
the Sentinels that it would be easier to eliminate the source that
causes the creation of mutants to make their jobs easier. As Cyclops is
telling them this, Havok, still believing that he is a menace, attempts
to commit suicide, realizing what Alex is going to do, Scott chases
after him.

Meanwhile, the Sentinels ponders Cyclops’ suggestion and realize
that it’s the very sun that is the cause of mutants on Earth and with
this logic considered the entire Sentinel army blasts off into space to
try and destroy the Sun, a mission that is destined to end in failure
and the Sentinel’s destruction.

In the aftermath of the Sentinels exodus, Cyclops and the others
find Alex buried in a pile of rubble begging for help. Realizing that
his brother will need medical attention and psychiatric help in coming
to terms with his mutant nature, he decides to call one of the
Professor’s old colleagues. Shortly afterward, a call is made to Dr.
Karl Lykos who agrees to see Alex. As he is making arrangements with
Scott, one of his patients suddenly slumps into unconsciousness. 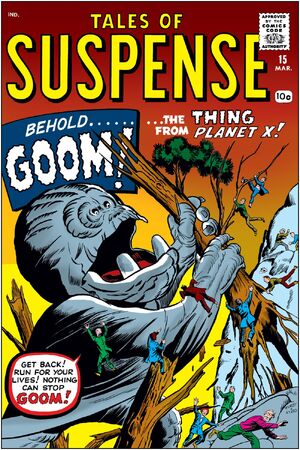 A man enters a castle determined to prove that there are no ghosts, but
the events he experiences convince him that the castle is haunted, and
so he flees. It turns out that the castle does not contain any ghosts,
but is possessed by animated suits of armor and living stone gargoyles.