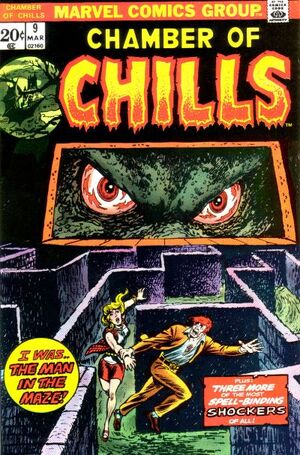 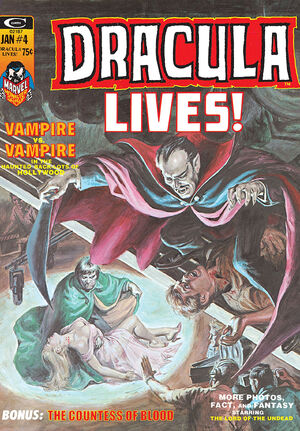 Now king of the vampires, Dracula returns to Transylvania with his vampire legions seeking to get revenge against the Turks who still rule his home whom he blames for his transformation into a vampire, as well as reclaim his castle which has since been taken over. Stopping at near by tavern to feast, Dracula overhears a patron named Aton Lekva boasting about Dracula’s death. Furious over Lekva’s words, Dracula feeds upon him, draining him dry before he resumes his travels to his castle.

One of the bar patrons Josef Yurac goes to the local church where he tells the priest Father Bordia about Dracula’s coming. Josef is unaware that Bordia is also a vampire as well and seeking the title of king of the vampires decides to go and destroy Dracula, he flies off to meet the vampire lord in bat form.

When Dracula arrive at his castle, he sicks his legions upon the soldiers that still reside there and forwards on to the throne room where he kills the men who are there as well. One survivor flees to the tavern and finds Anton standing inside, when he tries to get Anton to try and help, Anton reveals that he is a vampire and feasts upon his former comrade.

Back at the castle, Dracula has spared the women for his own personal use and becomes interested in one named Zaveria who hates the Turks because they killed her father. Just then Father Bordia appears in the room and challenges Dracula. Dracula is thrown off by Bordia’s priestly appearance, however realizes the “Father’s” true nature when he transforms into a wolf. Turning into bat form, Dracula easily fights off Bordia tossing the faux-man of the cloth across the room. Transforming back into human form, Bordia grabs a wooden stake and attempts to drive it into Dracula’s chest, but the vampire king easily knocks his opponent aside.

When Bordia attempts to throw the stake at Dracula, Zaveria deflects it with a candle stick. She takes the stake and then drives it right into Bordia’s heart killing him. Dracula then tests Zaveria to see if she would turn on him with the candle sticks as well, however she drops them to the ground and follows Dracula out the door. 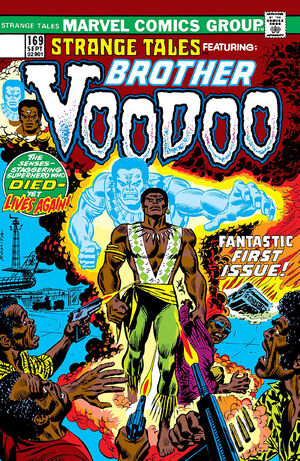 A physician named Doctor Maitland arrives at the airport in Port-au-Prince, Haiti. A man named Willoby comes out to greet him. Suddenly, two Haitian gunmen accost them and hold them at gunpoint. A cloud of smoke rolls in, and from it steps – Brother Voodoo. Voodo dives into the men, driving them to the ground, but one manages to get away in a rental car. While fleeing, he attempts to run Brother Voodoo down, but Voodoo dives out of the way and the car crashes into the side of a building.

Suddenly, a ghostly figure rises from Brother Voodoo’s body. The apparition takes possession of one of the other gunmen and forces him to turn against his allies. When the threat alleviates, the spirit leaves the gunman’s body and returns to Brother Voodoo. Brother Voodoo takes a moment to reflect on the course of events that set him down his chosen path.

Some time ago, Brother Voodoo was merely Jericho Drumm, a prominent psychologist practicing in the United States. When he received word that his brother, Daniel, had fallen deathly ill, he immediately returned home to visit him. Daniel told Jericho that an evil man claiming to be Damballah the Serpent God arrived in Port-au-Prince to educate the locals in the ways of black magic. Daniel had been the previous Brother Voodoo, and sought to stop Damballah, but Damballah cursed him with a wasting disease. Daniel told Jericho to seek out an old Houngan named Papa Jambo. He was the only one with the power to end Damballah’s influence. At the stroke of midnight, Daniel died, and Jericho knew that Damballah was responsible.

Racing outside of the house, Jericho tackled Damballah, but the purported Serpent God beat him to within an inch of his life. Damballah spared Jericho, citing that he was not even worth killing.

Fulfilling his brother’s wishes, Jericho wrapped Daniel’s body and brought him deep into the jungle to the hut of Papa Jambo. He explained the situation to the old man, and Papa Jambo told him that Jericho would learn the ways of Voodoo and become the new Brother Voodoo. 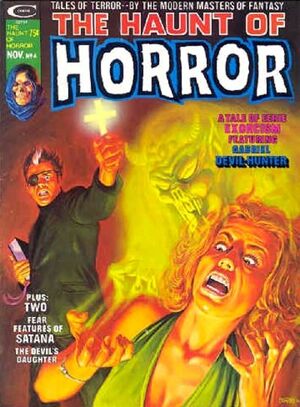 Continued from Haunt of Horror #2 (first italian issue on CDP corno # 10)… Satana and Zannarth continue their path to stop the Four and reopen the doorway to Hell.

When confronting the Four, they manage to kill Zannarth. Furious, Satana uses her powers to make them see their true selves, however this doesn’t have exactly the desired effect and the pain wracked members of the Four all revert to their human forms. This allows Satana an opportunity to kill them all.

In the aftermath Trachos appears alive and well and reveals himself to really be Miles Gomery. Miles then vanishes after boasting over Satana. In the aftermath, Satana feels the barrier to Hell disappearing, however she feels the answers she seek will be found on Earth, and she may get vengeance along the way, and so she returns there.