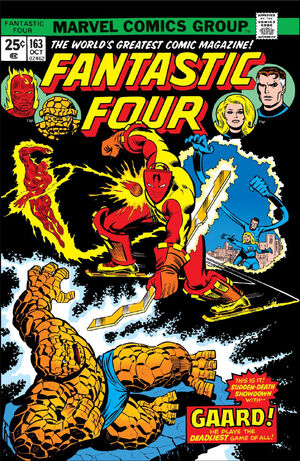 In order to save three universes from destruction and prevent
Arkon from syphoning the nuclear energy from the three dying worlds
through a Nexus portal, the Thing must close the portal with a special
device. Only one problem: Arkon has put a defender in place, a hockey
inspired being of immense power called Gaard. Try as he might, Ben
cannot slip the special disc past Gaar, who’s superior skill on a pair
of skate-like devices that allow them to move through the dimensional
corridor between the Nexus and the three Earths. When Ben considers
giving up, he is contacted telepathically by Mr. Fantastic who reminds
him that three worlds hang in the balance.

Watching on a monitor screen from their world, Reed and Sue go
over Arkon’s plot to turn all three worlds against one another by
sending his agent Albert DeVoor (under the guise of three false
companies) to purchase technologies from each of the three worlds: The
Fantastic Four’s Earth, the alternate reality of Earth-A, and the Fifth
Dimension and pit all three against each other hoping that the nuclear
fallout would repower Arkon’s world. DeVoor explains to them that Arkon
designed the gateway to the Nexus so that it could only fit two people
so that his chosen guardian known as Gaard would be unmatched against
anyone who would happen to try and stop him.

Their attention called to Arkon’s world, they witness as the
Thing from Earth-A (that realities Reed Richards) and the Human Torch
has appeared on Arkon’s world, fighting through his defences forcing
their way into Arkon’s throne room. There, Arkon has the upper hand with
his D-Bolts until the Human Torch burns away the strap making them fall
loose, making for an easy defeat.

With time running out, Reed Richards uses the devices at his
disposal to project an image of his Earth-A counterpart into the Nexus
to confuse Gaar into thinking that there are two Thing’s in his realm.
Thoughtlessly tossing his “hockey stick” at the phantom image of the
Reed-Thing, Ben gets the opener that he needs: Slamming Gaard aside, he
throws the device into the Nexus portal, closing it for good. With his
goal over with, Gaard skates away allowing Ben to go free. After Ben
leaves, Gaard unmasks revealing himself to be Earth-A’s version of
Johnny Storm, who was long since thought to have been killed in Vietnam,
but was rescued and reformed into Gaard by Arkon.

With the threat passed, Ben and Johnny return to their native
realities where hey rejoice their victor with their fellow Fantastic
Four members. When Alicia arrives with young Franklin she is curious to
know if it’s really her Ben who has come home, and he shows her by
picking her up in a hug and giving her a kiss. 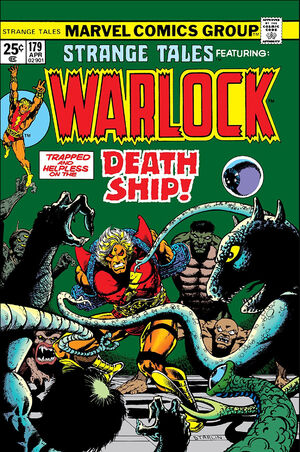 Warlock is captured by Autolycus of the Black Knights an brought
aboard Magus’ Flagship. His fellow prisoners tell Warlock, that
survivors of the Wars of the Church are taken as slave laborers, those
who refuse will be terminated and their remains will be chemically
broken down and valuable elements that can be retrieved will be used to
further the cause of the Church. They also tell him, that Non-Humanoids
are not considered fashioned in the Magus’ image and thus must be
disposed of, this also holds true for some Humanoid types – such as
Trolls. Despite being ordered to capture Warlock unharmed, the Matriarch
considers what would happen to the Magus, if something were to happen
to Warlock. Autolycus is not pleased with the Matriarch’s orders and
shows a Code of Honor, he is however a soldier. Warlock refuses to lead
the prisoners in their rebellion and tells a story of two Cavemen (Grak
and Bak). Warlock singlehandedly fights off the Black Knights and then
battles Autolycus, Warlock is more powerful but hesitates to finish
Autolycus. Autolycus is ready to kill Warlock as the Soul Gem acts on
its own and steals Autolycus’ Soul rendering Warlock unconscious,
Warlock considers, that the Gem will be responsible for his eventual
transformation into the Magus. Warlock leaves the other prisoners after
defeating Autolyus and is joined by Pip, for the first time Warlock
tells somebody his story.