Conan has finally made his way to Arejnun and while trying to drink
his memories of the journey away, notices a young woman in a window. He
follows her and assists her in escaping a small group of thieves. The
woman, Arlinna, is being blackmailed by Baron Takkim to steal a treasure
from the merchant Lun-Faar, and allows Conan to safely escort her to
his quarters. She knocks Conan out and makes her way to Lun-Faar, who
believes she is Lady Asqueth, there to view his artifacts, including a
giant gargoyle statue. Arlinna attempts to steal the Dragon Head of
Koblar-Zann but is caught by Lun-Faar, who beats her and turns her
loose. He wants to see who she is working with, and orders the gargoyle,
in reality a demon bound by the merchant’s willpower, to kill her
compatriot. Meanwhile, Conan has recovered and tracks the girl, who
confesses everything. The two go to Baron Takkim, so Conan can have
words with him, but the gargoyle attacks and kills Takkim first. It then
turns to Conan, but the fight with Conan so drains the mental energy of
Lun-Faar, that his mental control snaps, and the demon, furious at
being controlled, flies away to exact its revenge on its former captor.
Conan and Arlinna, unsure what has happened, decide to head back to his
place once again.

Freely adapted from “The Purple Heart of Erlik” by Robert E. Howard.

foothills of the Mountains of Mommur. As they went further into the shadowy

corridors and over bridges spanning rivers of flowing lava, Thongor pondered what

use a Black Druid of Zaar might have for a warrior such as he. Attended by

unseen servants and eating the wizard’s food, Thongor looked over a map with

Sharajsha, discussing plans to find and repair his flying ship. Thongor was

suspicious, but he owed the wizard for saving his life and Sharajsha had said he

needed a warrior. He demanded to know Sharajsha’s reasons, to which the wizard

replied that he had gazed into his magic mirror and seen the future, seen the

fire and ruin that would destroy mankind. Thongor angrily drew his blade from

its scabbard, unimpressed with ‘parlor tricks’ until he gazed into the mirror

himself and saw himself lying cold and dead.

Based on Thongor and the Wizard of Lemuria by Lin Carter 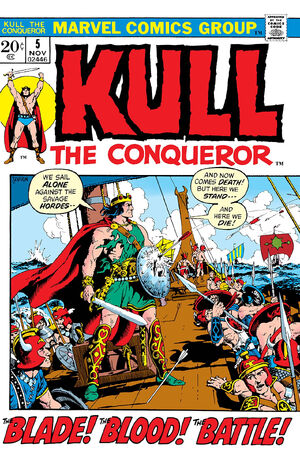 An ambassador Prince of neighboring Demaskar seeks Valusia’s aid in fending off their rival, the country of Rikos and its sorceror King Zakar. Kull agrees, unaware that the Prince means to make sorcerous sacrifices of the Valusians.