Conan chases Atali across the snow, slays her two frost giant brothers, and catches her. Her father, Ymir then takes her from Conan.

Conan, working on a Turanian galley, is attacked by a pirate crew led by he pirate Fafnir, whom he met, briefly, in Shadizar many years ago. Conan’s crew is defeated and killed but Conan is pressed into service of the pirates. Before anything can happen, however, the ship is scuttled on a hidden reef in mysterious white mists, and only Conan and Fafnir make it to shore. They fight for a minute, then realize they are too evenly matched and have no real reason to fight anyway. Together, they rescue a girl from a dinosaur-like monster. The girl, Kyrie, reveals that the two are on the ancient island Bal-Saggoth, and that she also was shipwrecked on the island but, as she had scarlet hair like the sea-goddess Aala, was taken as an object of worship. The high priest Gothan, however, took over and killed those loyal to Kyrie, and dumped the girl on the lagoon to be killed. Fafnir and Conan, desperate for good, agree to help Kyrie get her kingdom back, fulfilling an ancient prophecy. The three reach the imposing castle and march right in, relying on the power of the prophecy of two men from the sea who will destroy the reptile guardian. Gothan’s puppet king, Ska, has his champion, Vertorix, challenge Conan, but after a brief battle, the onlookers discover that Vertorix is an empty suit of armor that fights like a man! Kyrie realizes that Gothan controls the armor, and using her mirrored headdress, reflects the sun into Gothan’s eyes, causing him to lose concentration. The armor crumbles to the ground and Gothan and Ska flee, leaving Kyrie, Fafnir, and Conan in charge. 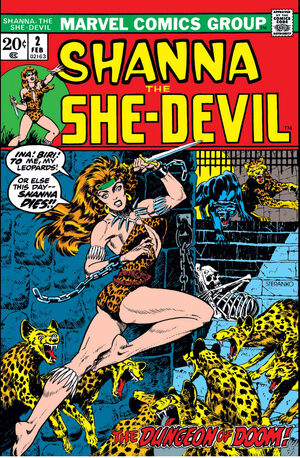 Shanna is asked by Jakuna Singh to stop a notorious slaver and drug dealer named El Montano.
Continued to next issue…