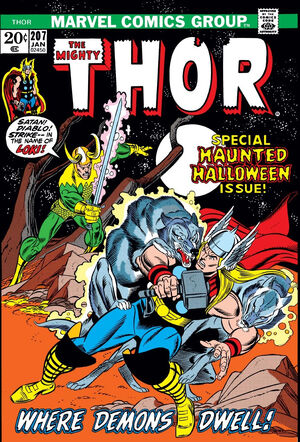 Thor has followed the Absorbing Man to Vermont, which is just
beginning its Halloween celebration. Thor manages to defeat him by
knocking him into the lake, where he absorbs the properties of water and
begins to flow away. But then, Loki arrives, who has by mystic means
transformed two dogs to kill Thor. Thor defeats the dogs, then Loki
summons the Firesword. Thor manages to defeat Loki with a lightning
strike, which has the side effect of blinding him. When Thor returns to
Asgard, he discovers that Sif left with Karnilla to search for Balder. 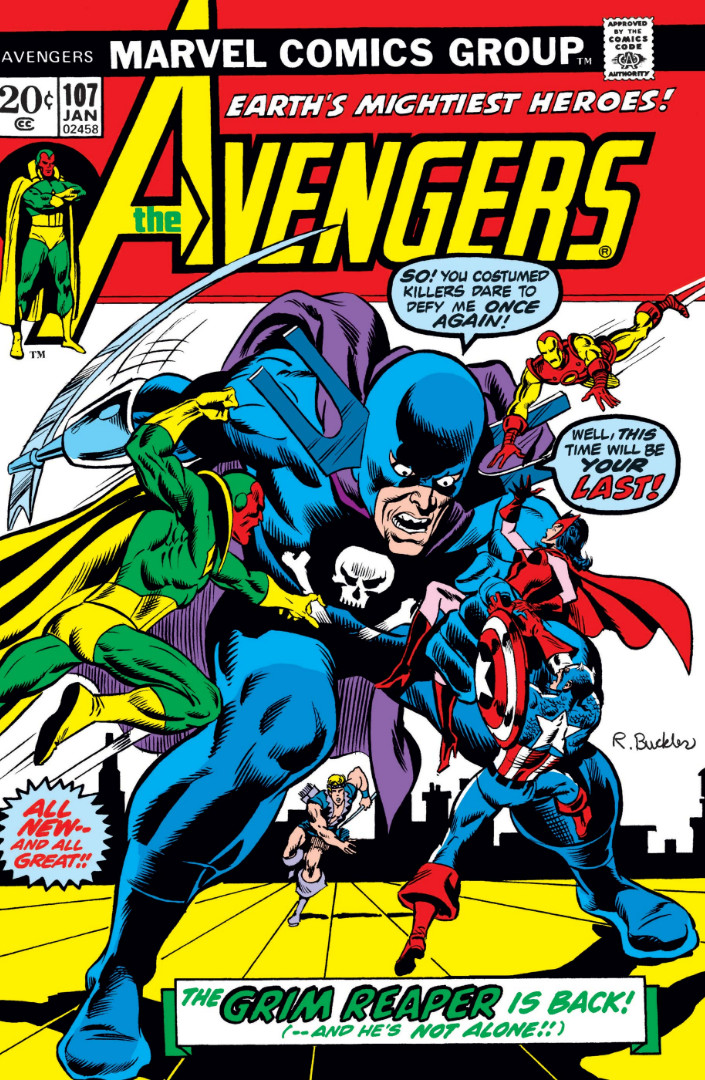 With Black Panther, Scarlet Witch,
Iron Man and Hawkeye as their prisoners, the Space Phantom and the Grim
Reaper begin to lay out the next phase of their plan. As they plot what
to do with the remaining Avengers that have not been captured, Captain
America continues to uncover the mysteries of his returning memories of a
previous battle against Hydra. His memories take him to an abandoned
warehouse where he beings to recall was a front for a hidden Hydra base
below. He recalls fighting Hydra soldiers with Rick Jones and the two
being shrunk down to size before they eventually located the Supreme
Hydra and resumed their normal size. His final recollection is beating
the Supreme Hydra and unmasking him and being shocked by who’s face was
underneath the mask.

While elsewhere, the Vision wanders the city still brooding over
the offer to have his mind transferred into the body of Wonder Man, an
offer that was made by the Grim Reaper. The Reaper himself appears who
makes him the offer again and takes Vision back to where the body of
Wonder Man is being stored. There, the Reaper reveals that he really
cannot transfer the Vision’s mind into Wonder Man’s body, because Wonder
Man is dead, however if they join forces he would transfer the Vision’s
mind into the body of Captain America. Trying to appeal to Vision, the
Grim Reaper reveals his and the Space Phantom’s plan:
He retells the Avengers first battle against the Space Phantom (which happened back in Avengers #2, Iin Italy on THC # 6) and was trapped in limbo, but when Loki banished Jane Foster to Limbo (in an unrelated battle that occurred in Journey into Mystery #108, in Italy on THC # 13) the Space Phantom was freed from his prison, he then found the Grim
Reaper and the two teamed up to achieve a mutual goal. To this end, the
Phantom took the form of Viper, and later the Supreme Hydra during
Captain America’s last battle against the terrorist organization. When
the Phantom was unmasked by Cap, he paralized the star-spangled Avenger
and his partner, and then to facilitate their plot, the Space Phantom
made the whole world forget that Captain America was Steve Rogers,
suppressed Cap and Rick’s memories of the event and sent them on their
way.

Without finally revealing his and the Space Phantom’s plot, the
Grim Reaper asks if the Vision will go along with their plan so that he
may be human, a question in which the Vision answers “Yes.” 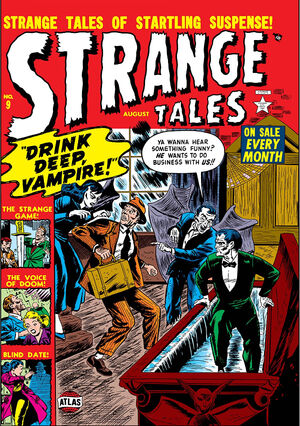 A man stumbles over a card game where four strange characters are playing for body parts.