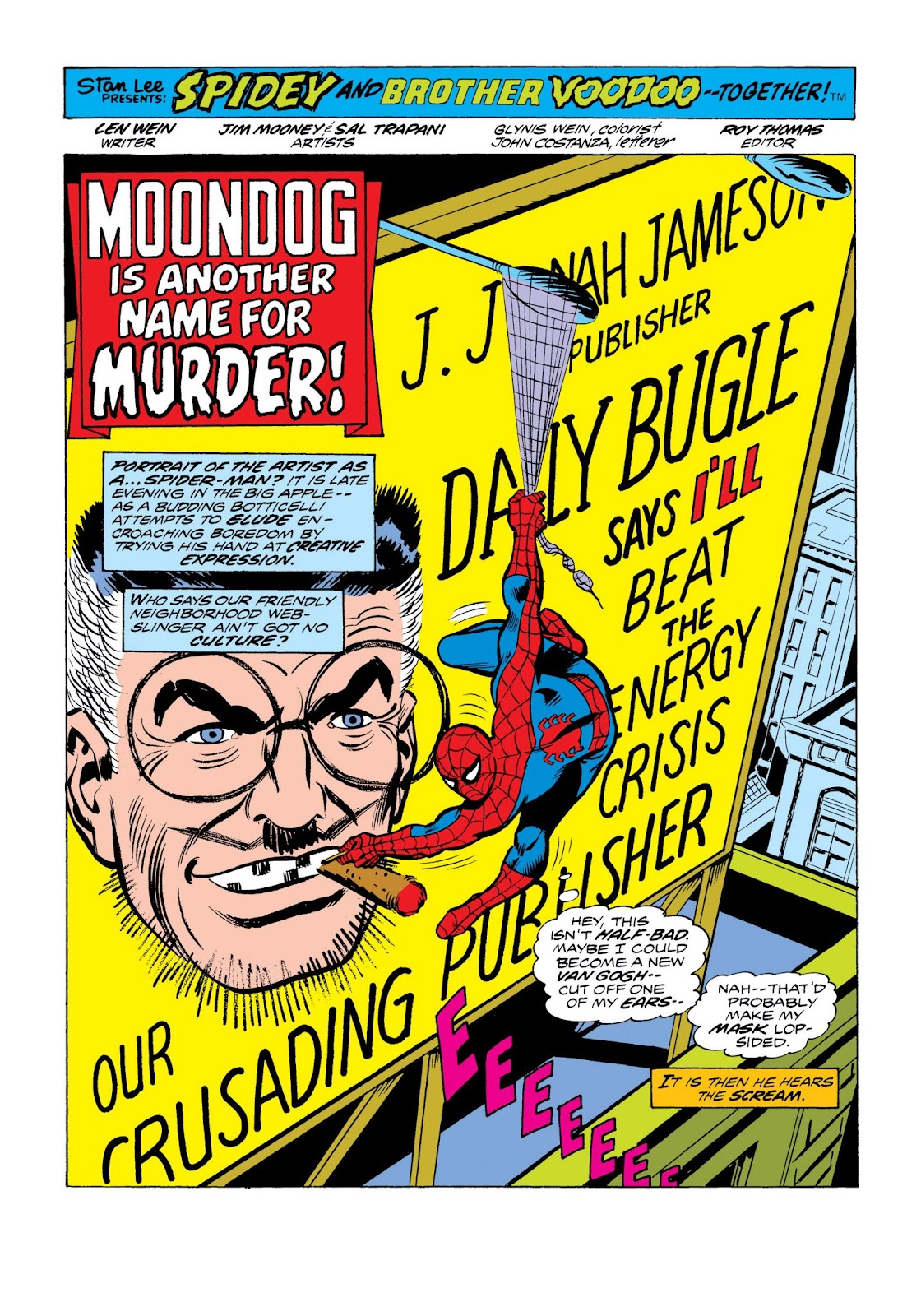 While web-slinging through the city, Spider-Man sees a young woman
being attacked by a group of men in Voodoo garb. Fighting off the
attackers, he is joined by Brother Voodoo who helps win the fight in
their favor and the girl is saved. 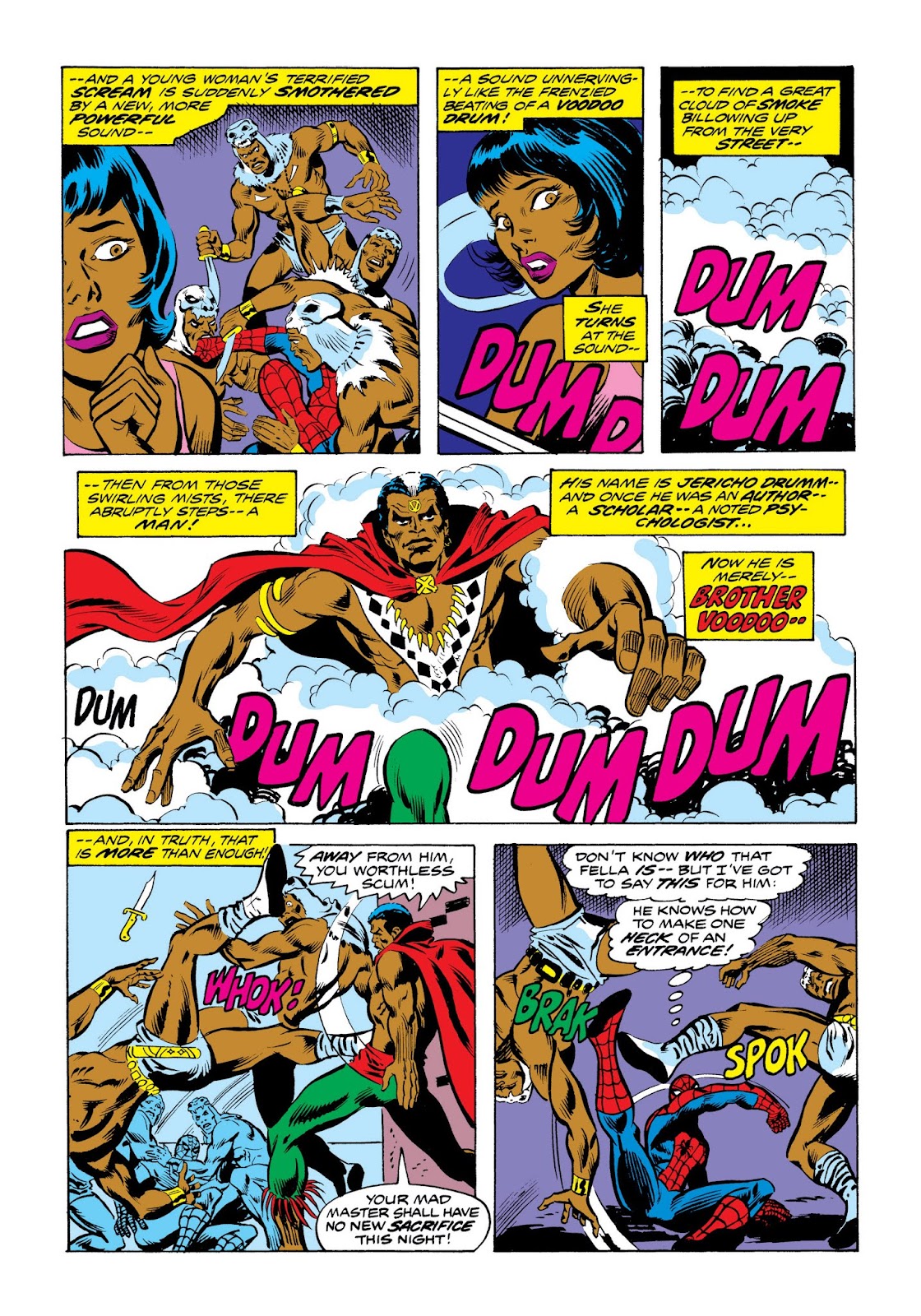 Brother Voodoo explains that they are
agents of Moondog the Malicious, someone whom Brother Voodoo has been
tracking after he had left New Orleans. 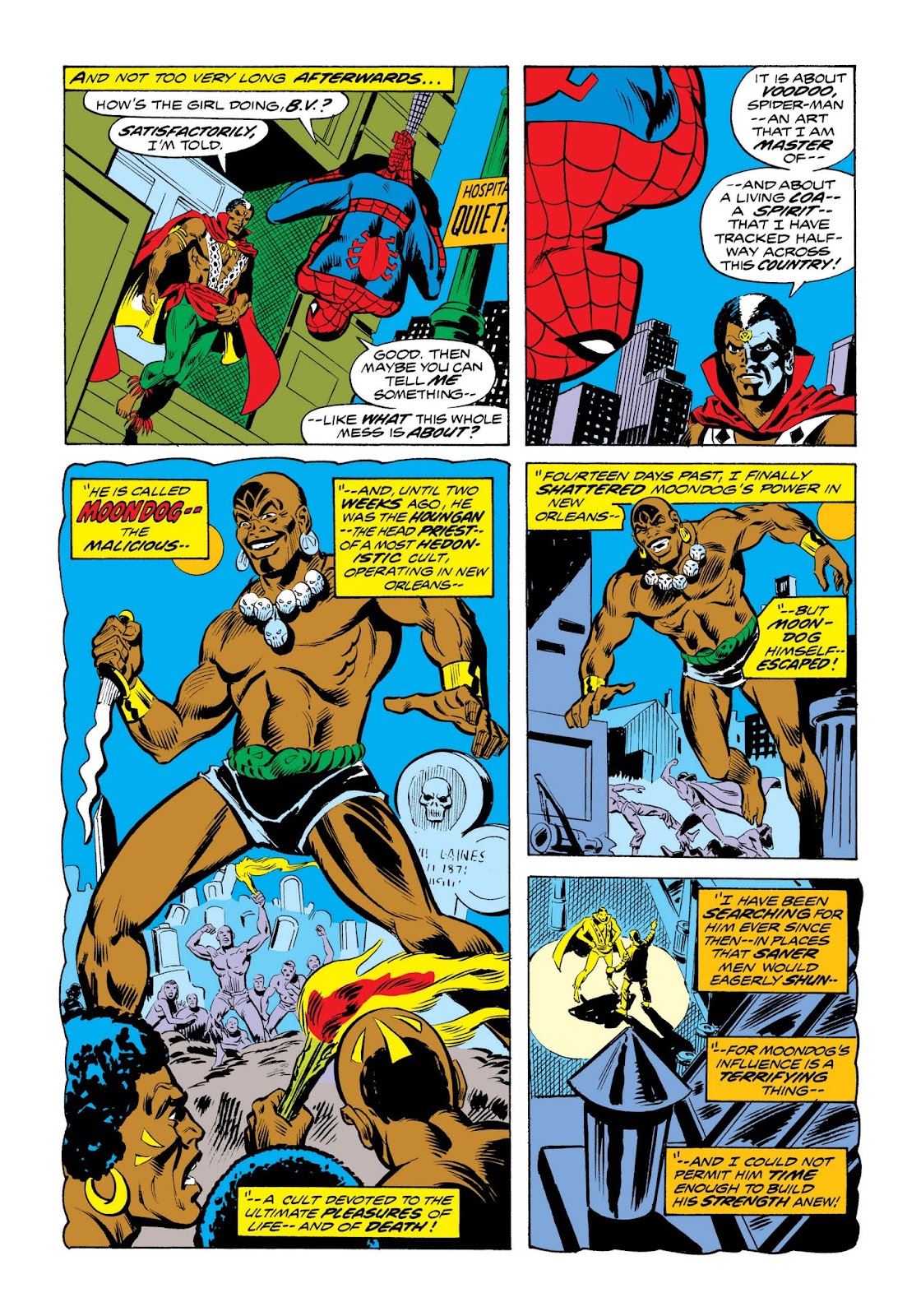 Learning that the woman attacked was an actress who was rejected
for a role in a play about Voodoo, the two heroes begin their search for
Moondog. 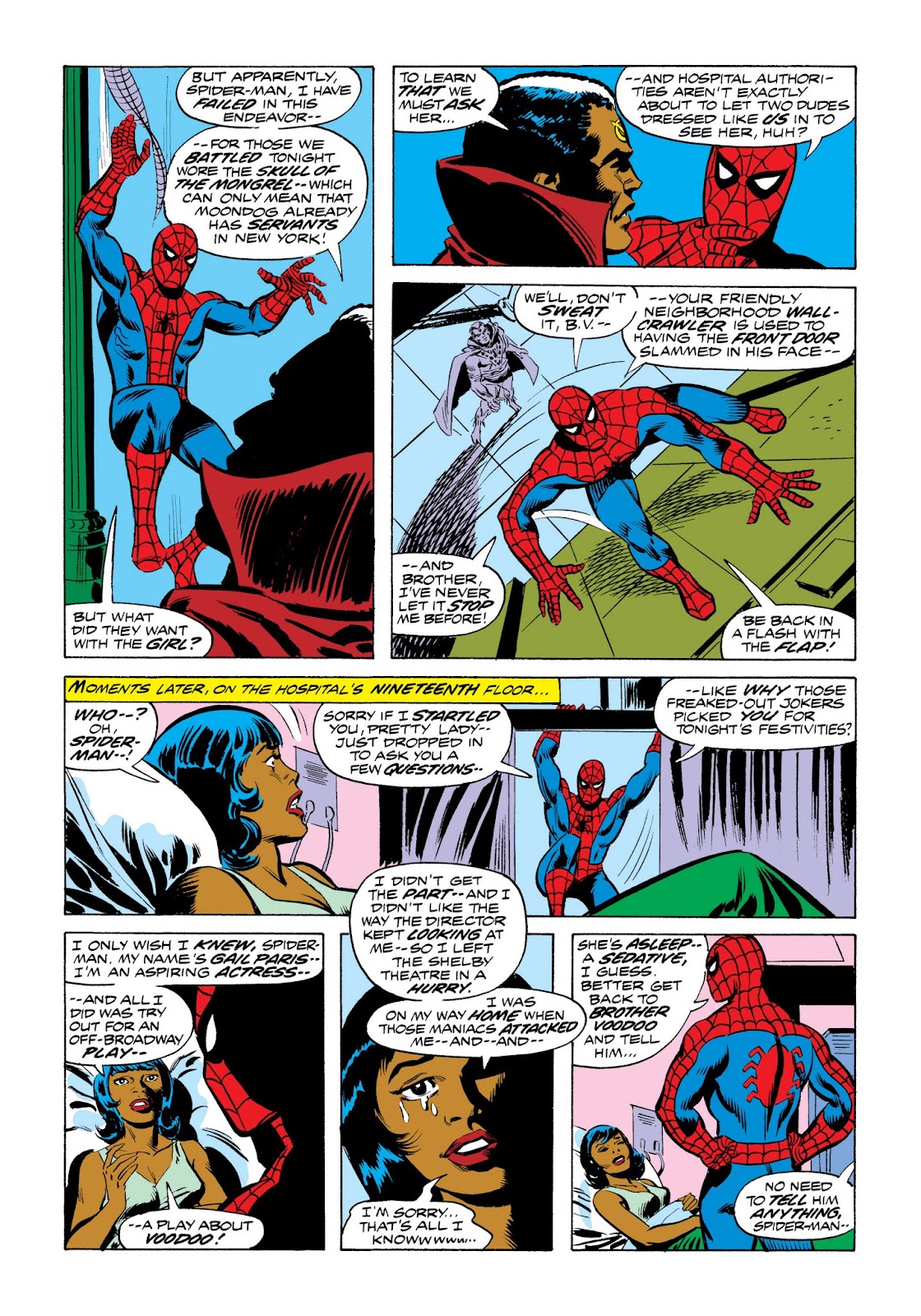 Having tacked down Moondog and his followers to a warehouse,
the two heroes attack but are soon captured and tied to stakes that are
lit aflame. 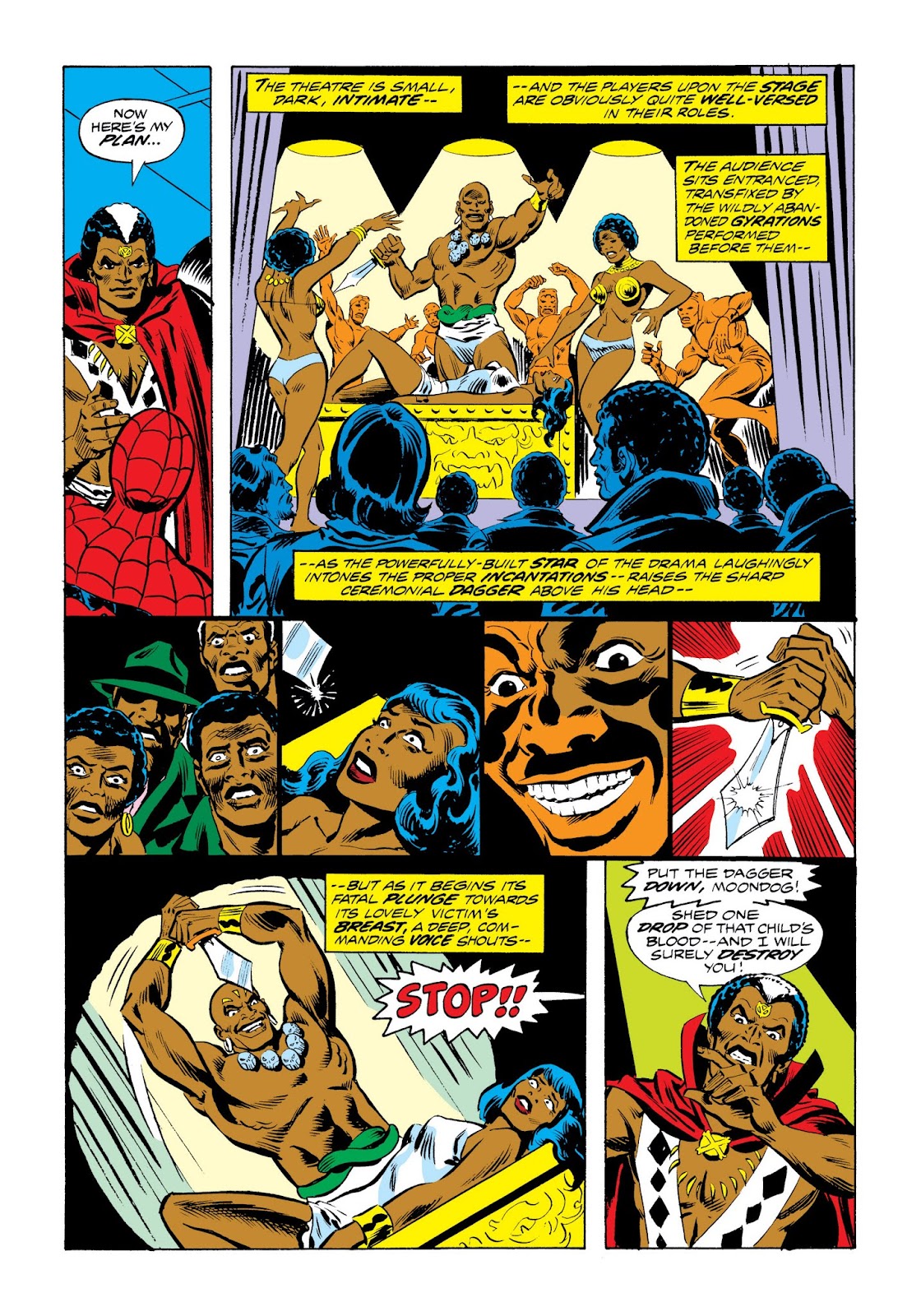 Brother Voodoo’s immunity to fire saves him, and Spider-Man wraps
himself in protective webbing until the fire burns down. 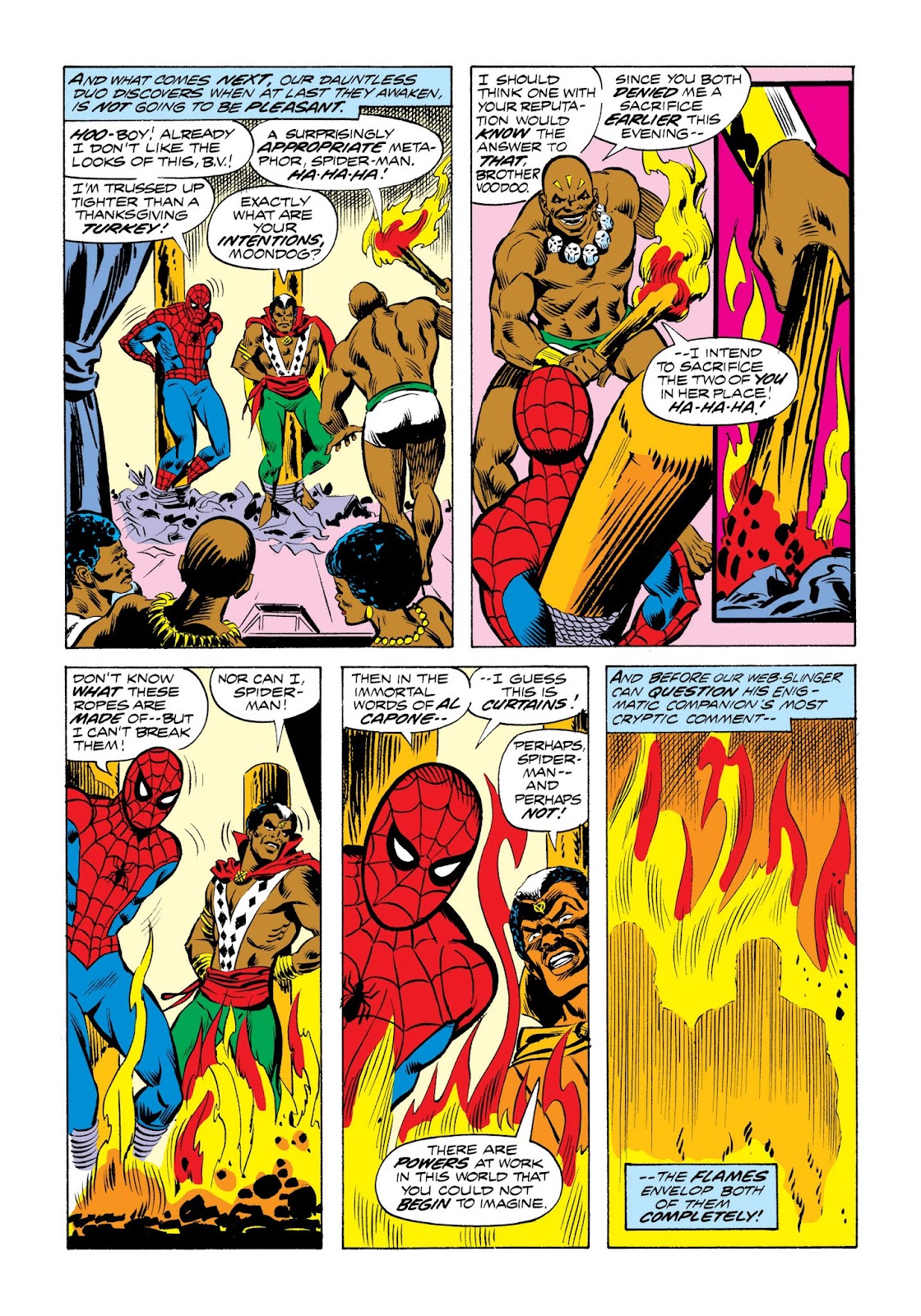 The two then
free themselves and battle off Moondog and his men. 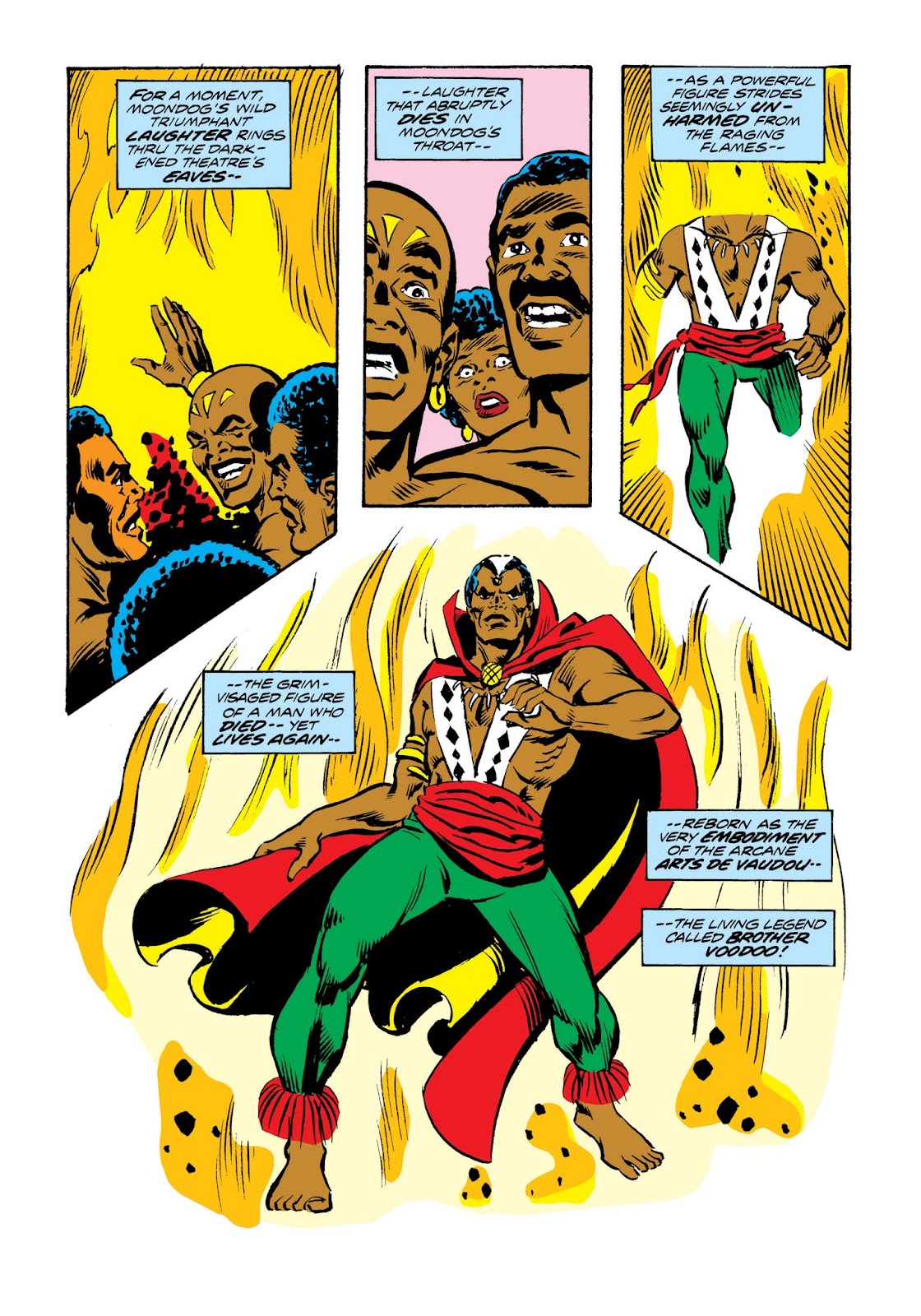 In the climax of the
battle, Moondog apparently snaps out of a trance, and doesn’t remember
anything that has happened, claiming that he is an accountant.

Before departing, Brother Voodoo explains that the man was possessed by one of the Lao spirits. 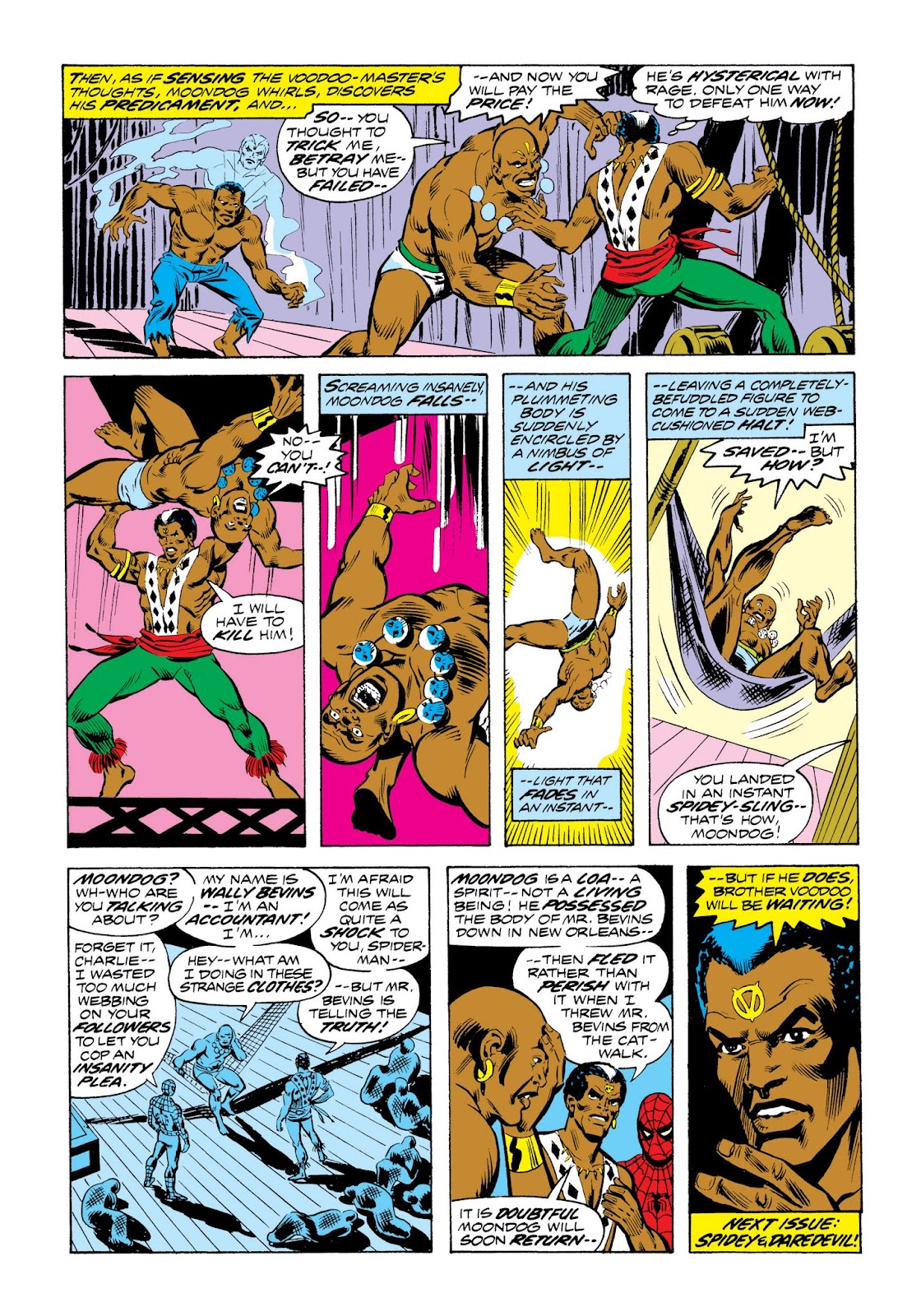 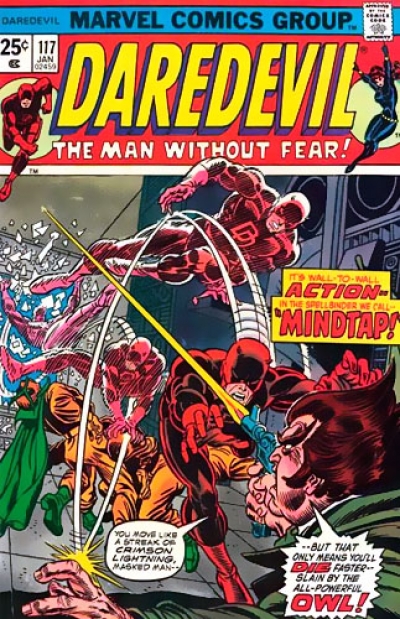 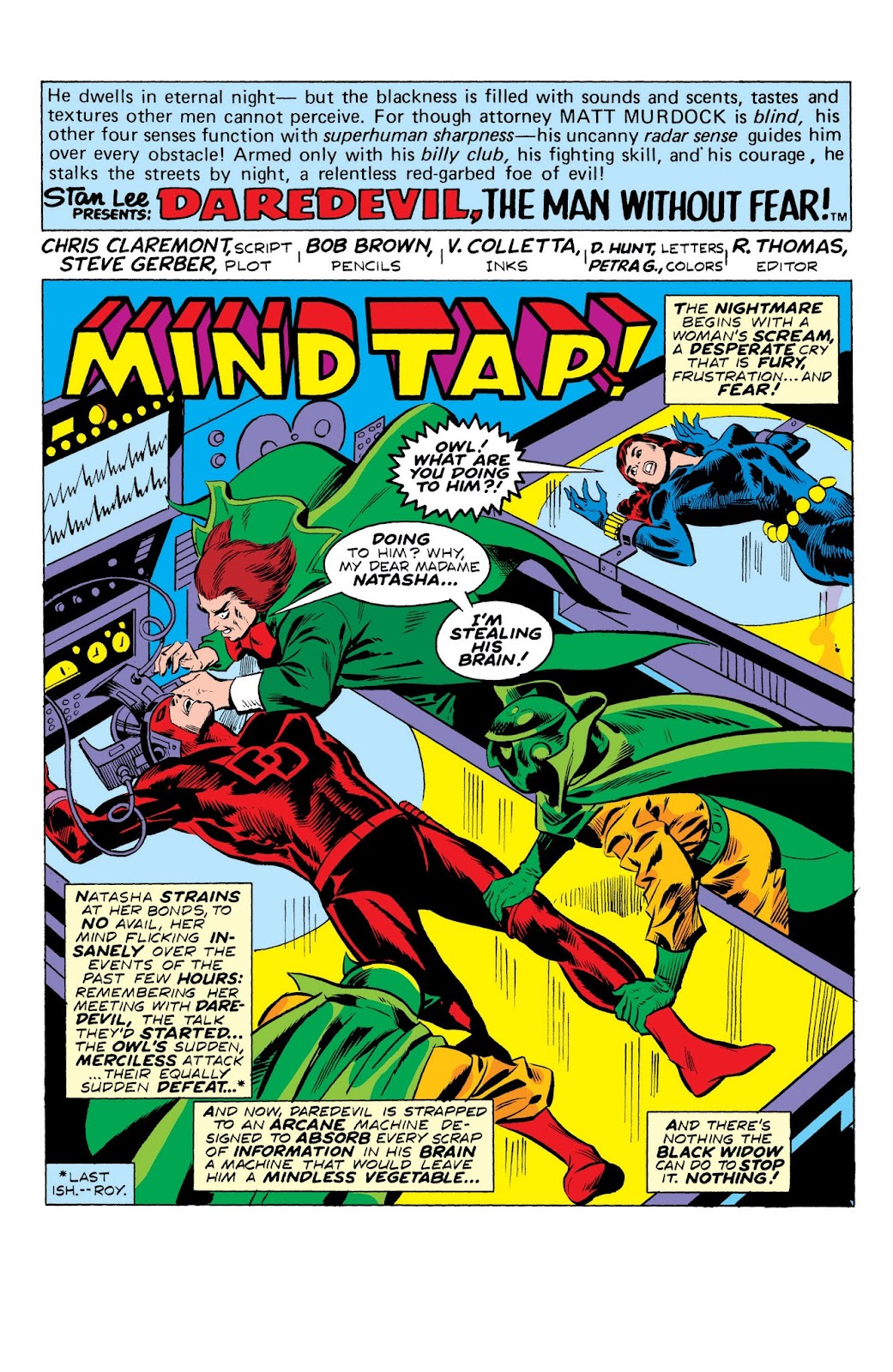 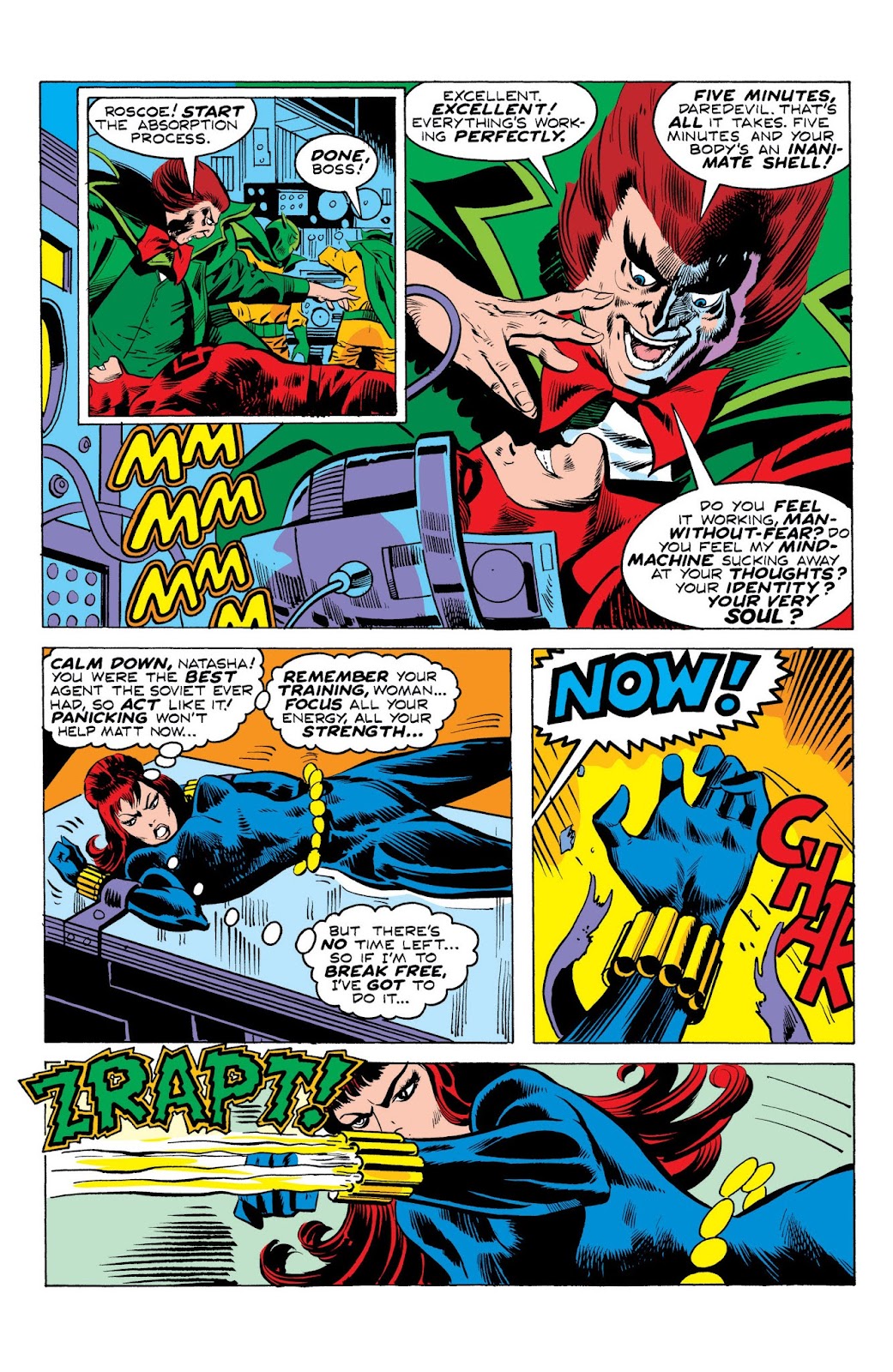 The Black Widow
manages to break free of her restraints and blasts the machines with a
widows bite, destroying it and saving Daredevil’s life.

As Natasha fights off an army of the Owl’s men she holds her own
until the Owl threatens to kill Daredevil unless she surrenders. 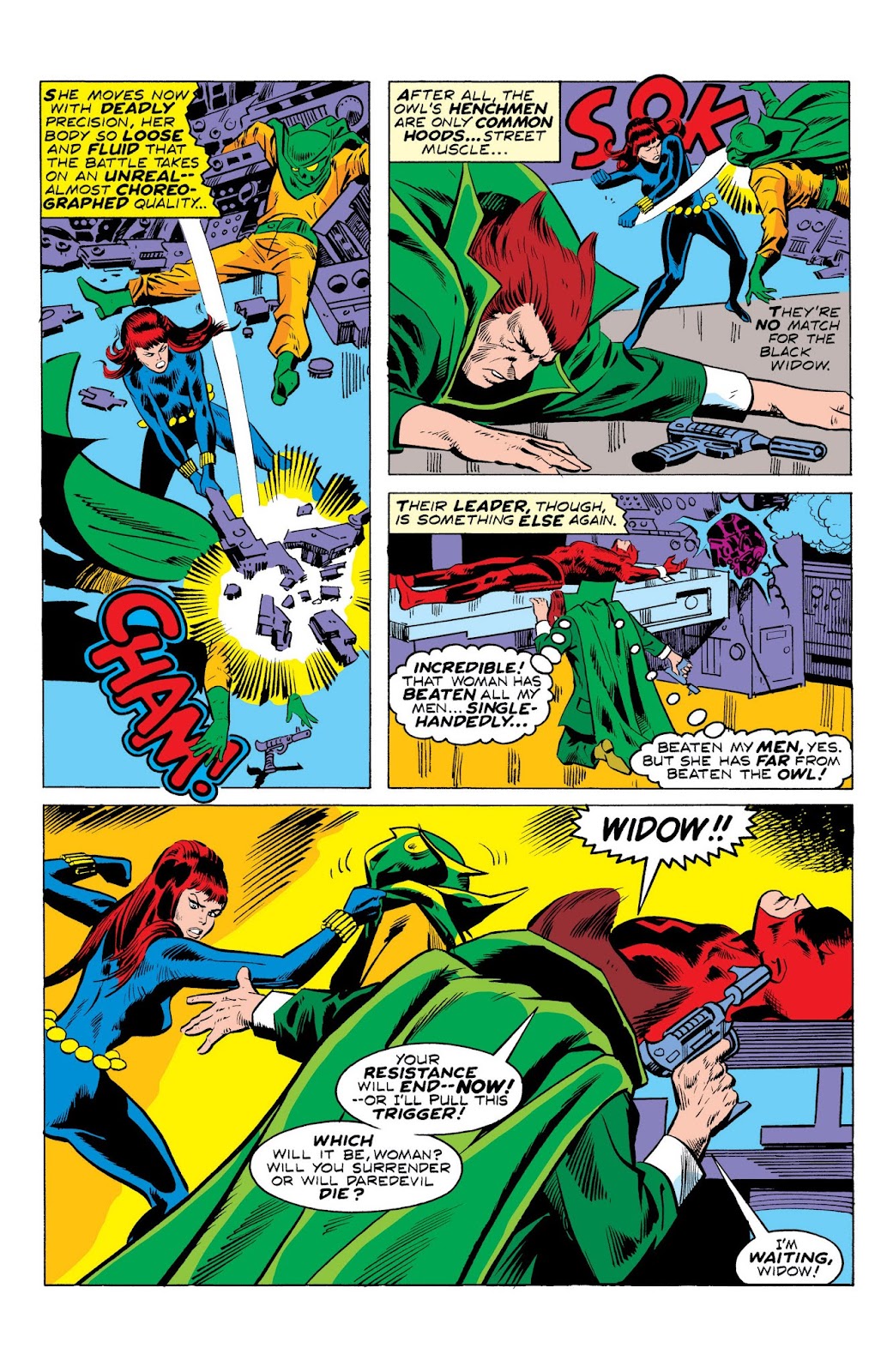 With no
other choice the Black Widow stops fighting and agrees to do the Owl’s
bidding in order to his bidding. He promises to let Daredevil go if she
carries out a single task for him. As the Owl is briefing the Widow on
her mission Ivan goes to police headquarters and speaks with Paul Carson
to see if he has heard anything about Natasha recently. Paul agrees to
go along with Ivan to look for the Black Widow.

That night the Black Widow carries out the Owl plot to kidnap a
woman from a nearby condo, the identity and reasons of which the Black
Widow has not been told. 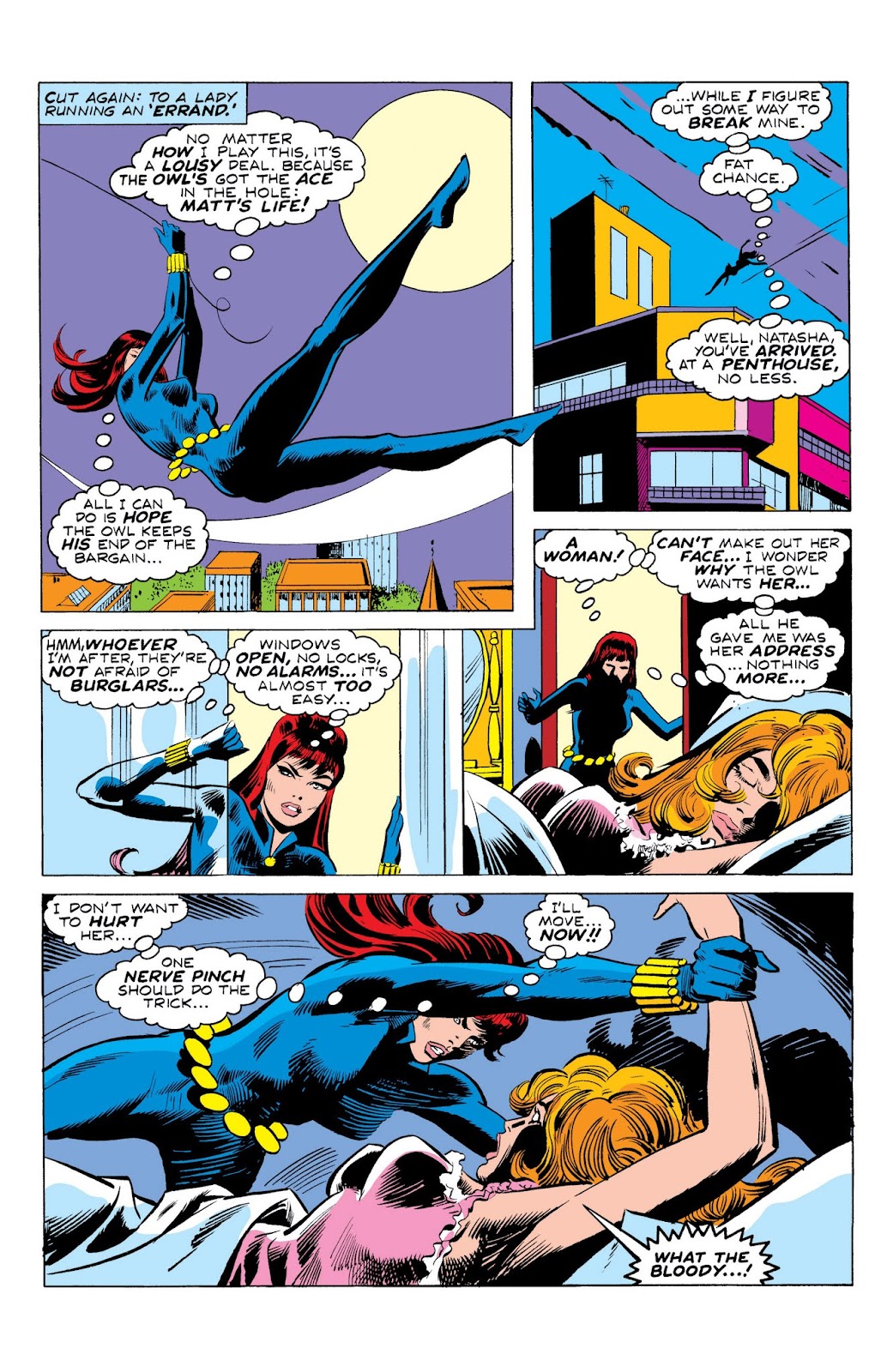 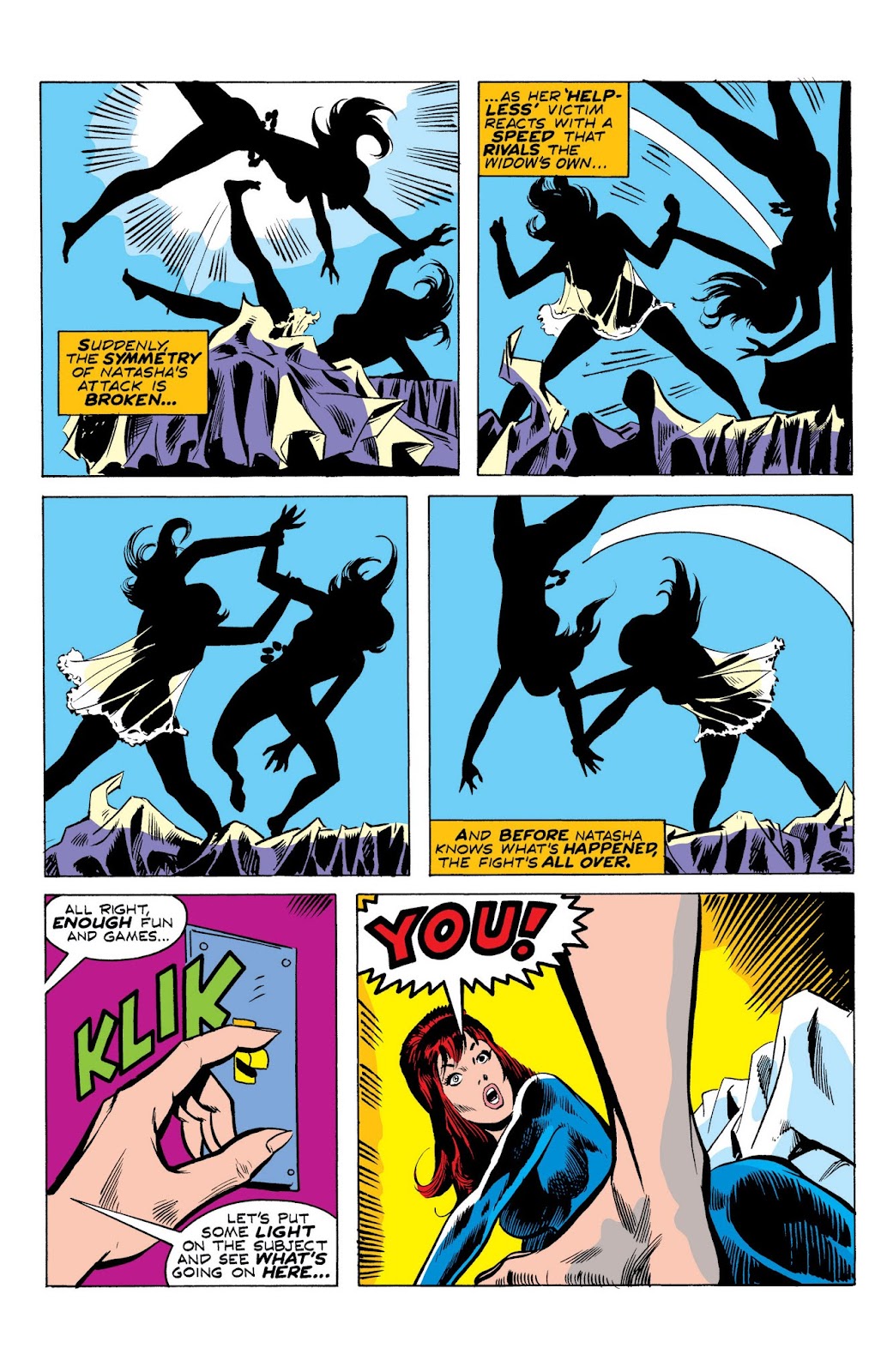 Attempting to capture the woman, Natasha finds
herself up for quite the fight, when the lights are turned on she is
shocked to find that the woman she has been sent to kidnap is none other
than Shanna the She-Devil. 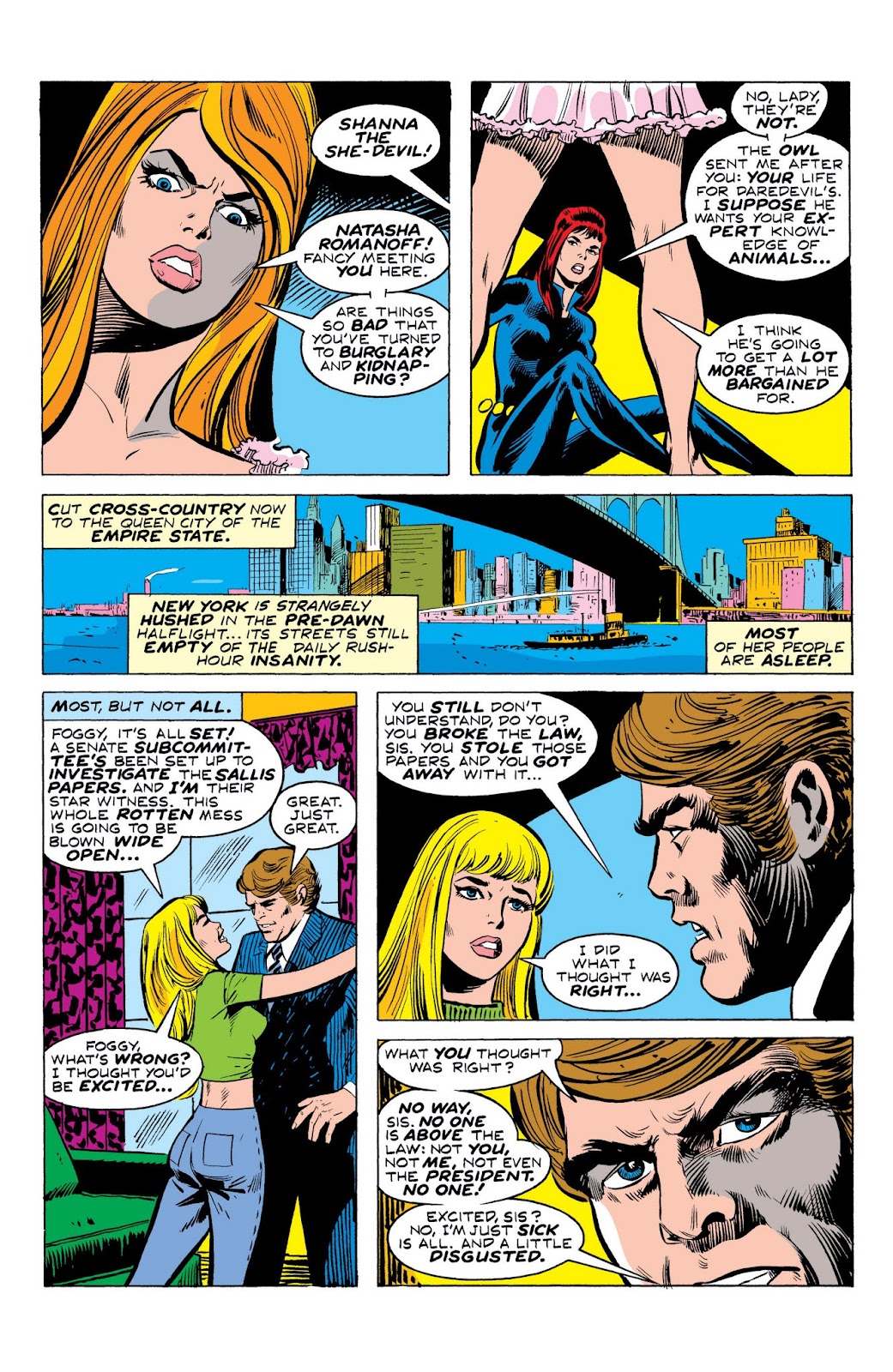 While in New York, Candace Nelson is excited that the government
is opening in inquiry into the Sallis Papers and that she has been named
a star witness. Foggy is less than impressed because she broke the law
and got away with it, and despite her good intentions he feels that
nobody is above the law.

Back in San Francisco, Ivan and Paul spot Black Widow swinging
across the city with Shanna and decide to follow them. The two women are
working together to free Daredevil, so when they arrive at the Owl’s
laid, Shanna pretends to be knocked out while the Black Widow brings her
in. The Owl does not suspect this, nor is he aware of how Shanna
recently gained super-human abilities since he recently got out of
prison. 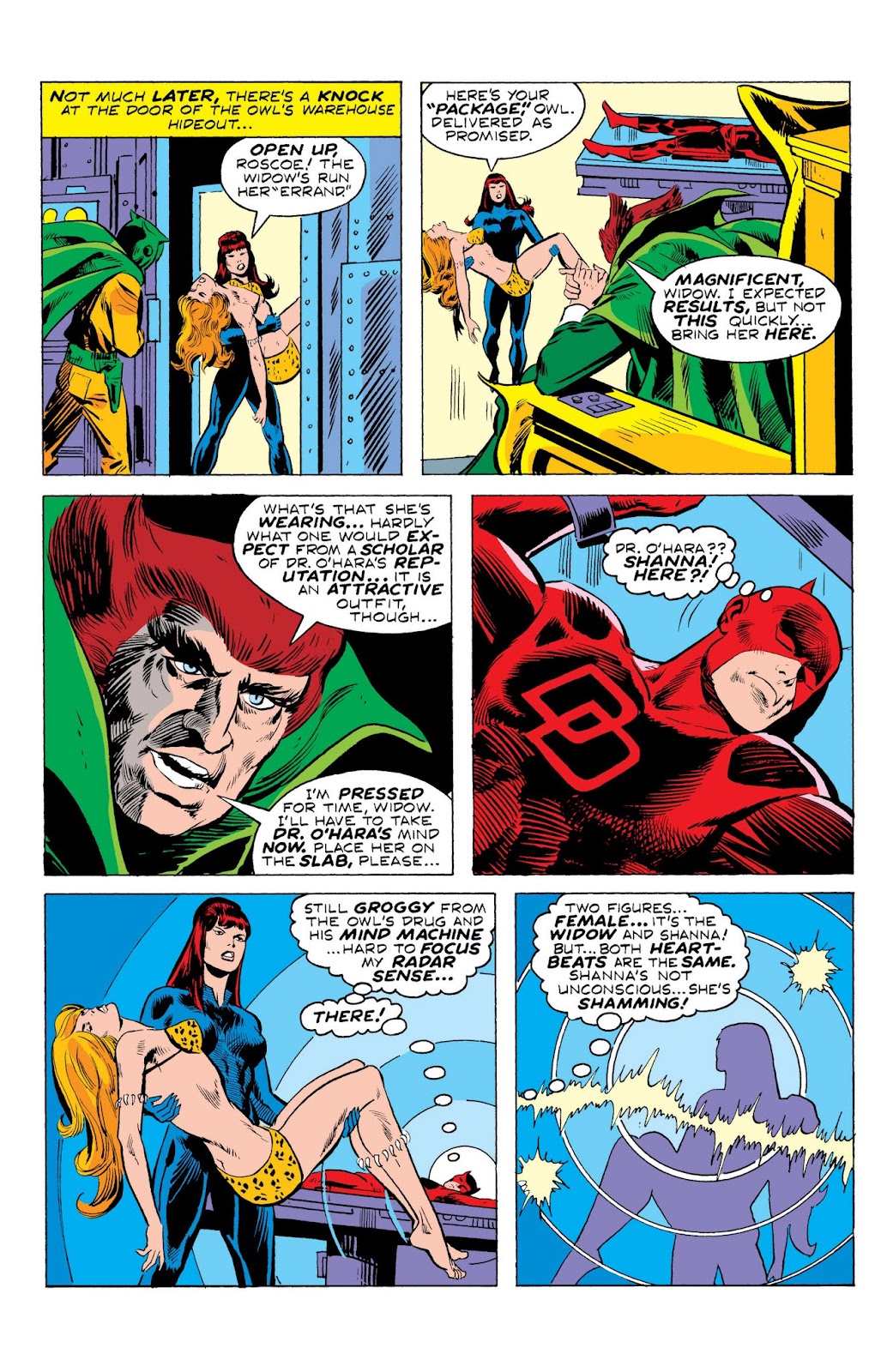 So when Shanna springs an attack the Owl is caught off guard. 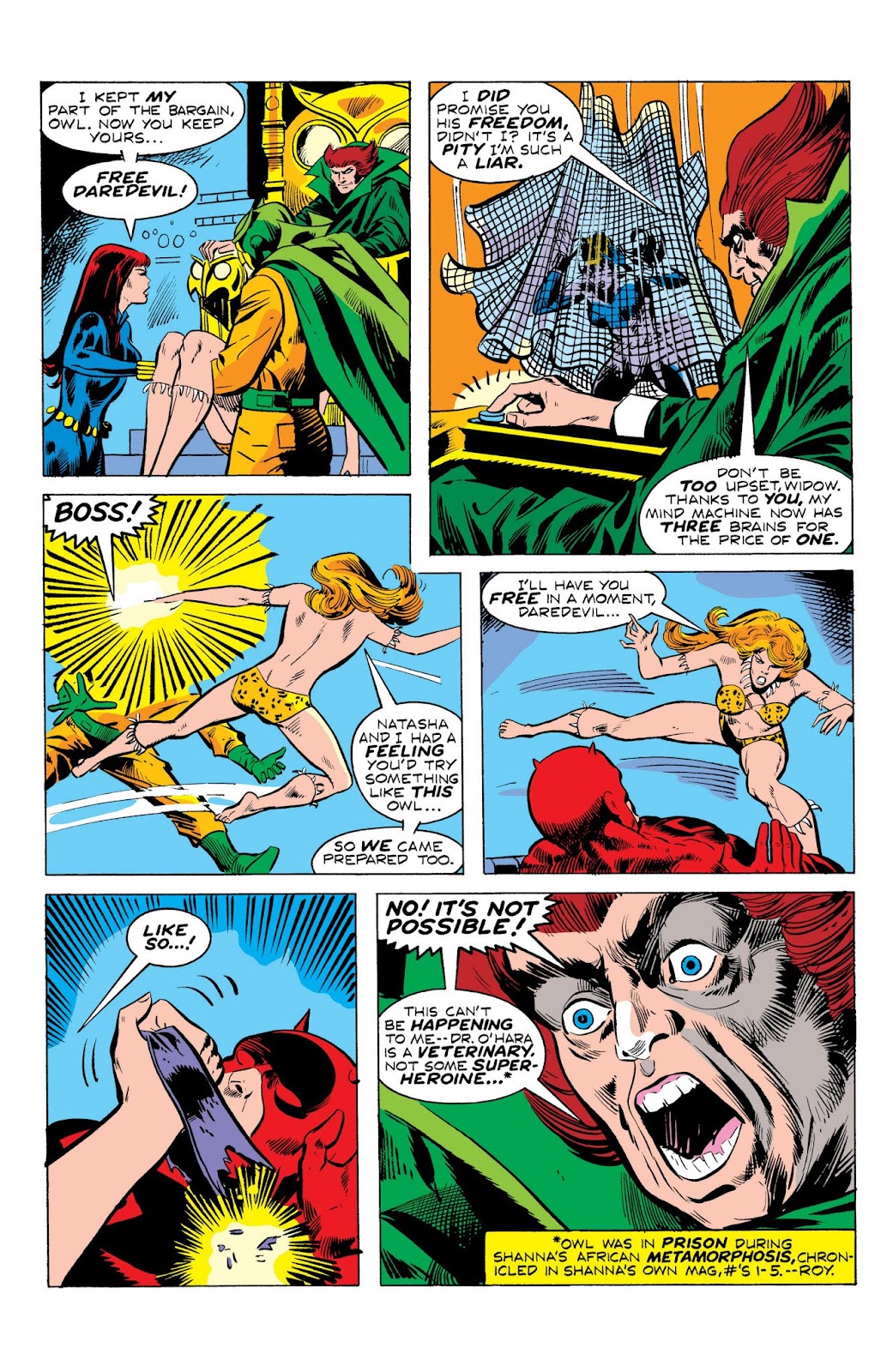 Although they free Daredevil, the Owl unleashes a blinding gas,
which naturally has no effect on Daredevil because he is already blind.
He attacks the Owl head on, however the crook attempts to make an
escape, leaving Daredevil to defeat him on the streets with relative
ease, even without his Billy-Club. 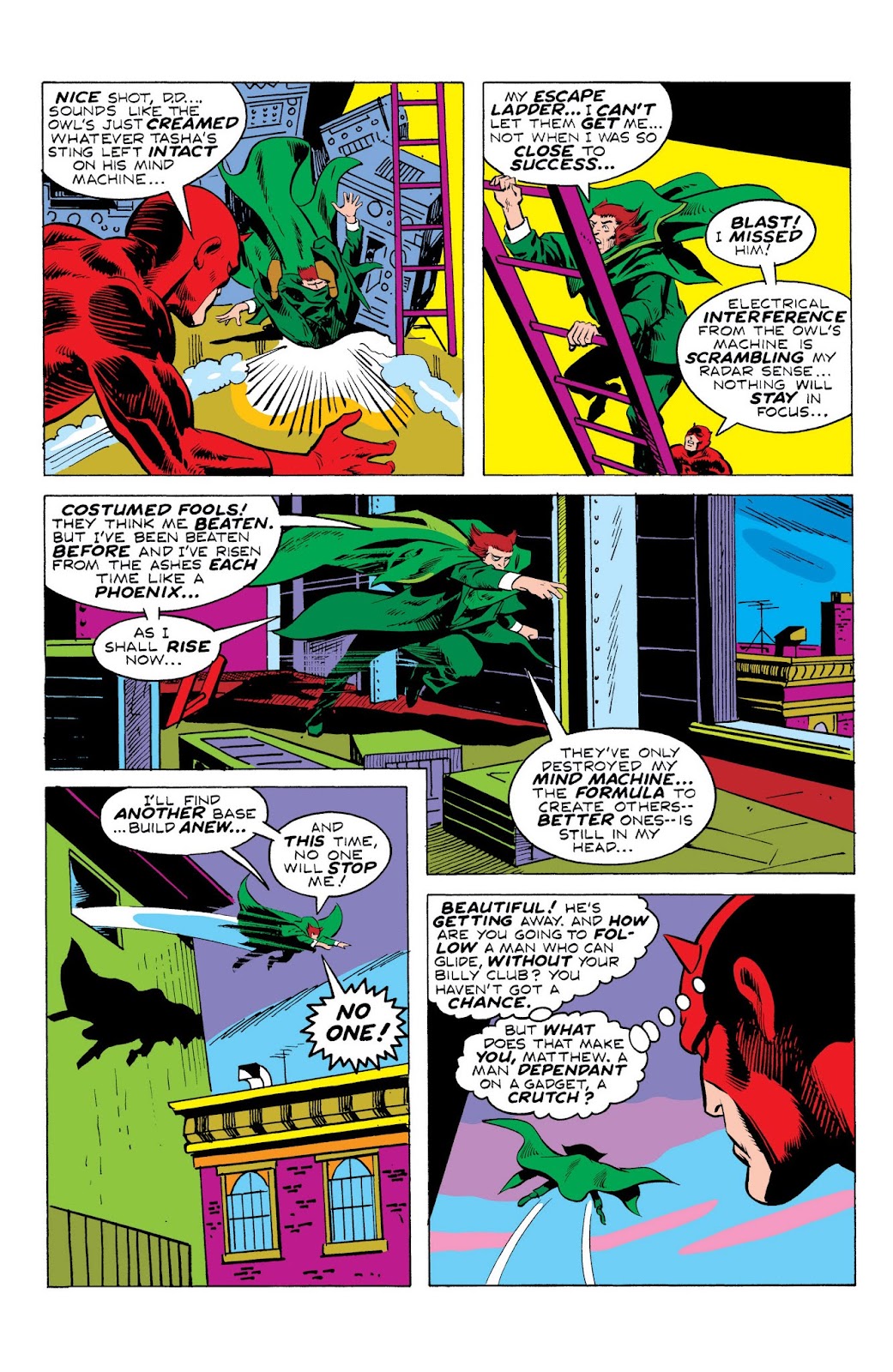 After having a new Billy-Club built for him by Ivan, Daredevil
and Black Widow meet on the Golden Gate Bridge, where Daredevil asks
Black Widow to come back with him to New York. 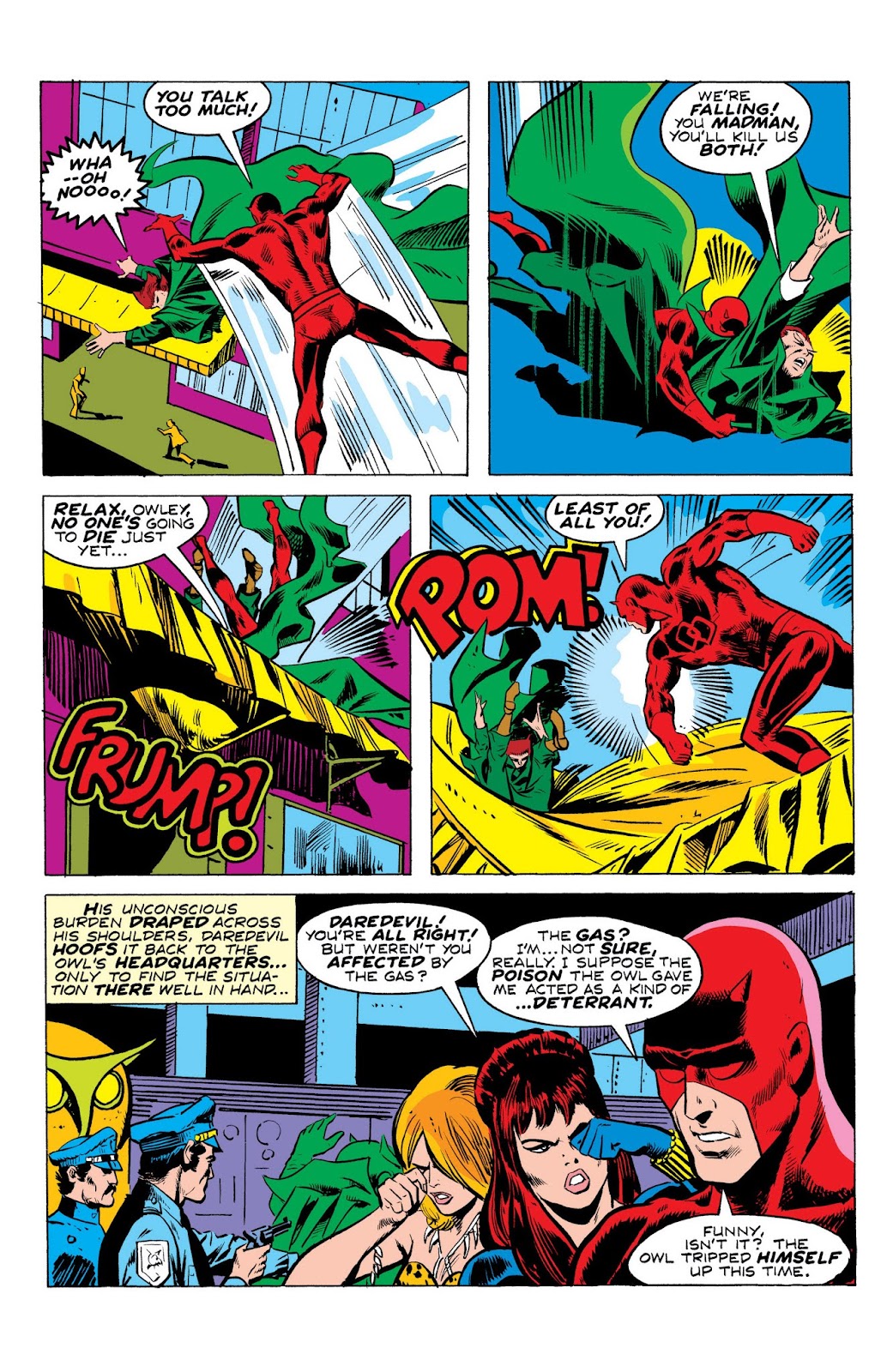 She declines his offer,
wanting to be able to make her own and not wanting to have to rely on
him to support her. Daredevil accepts this and the two depart with a
kiss. 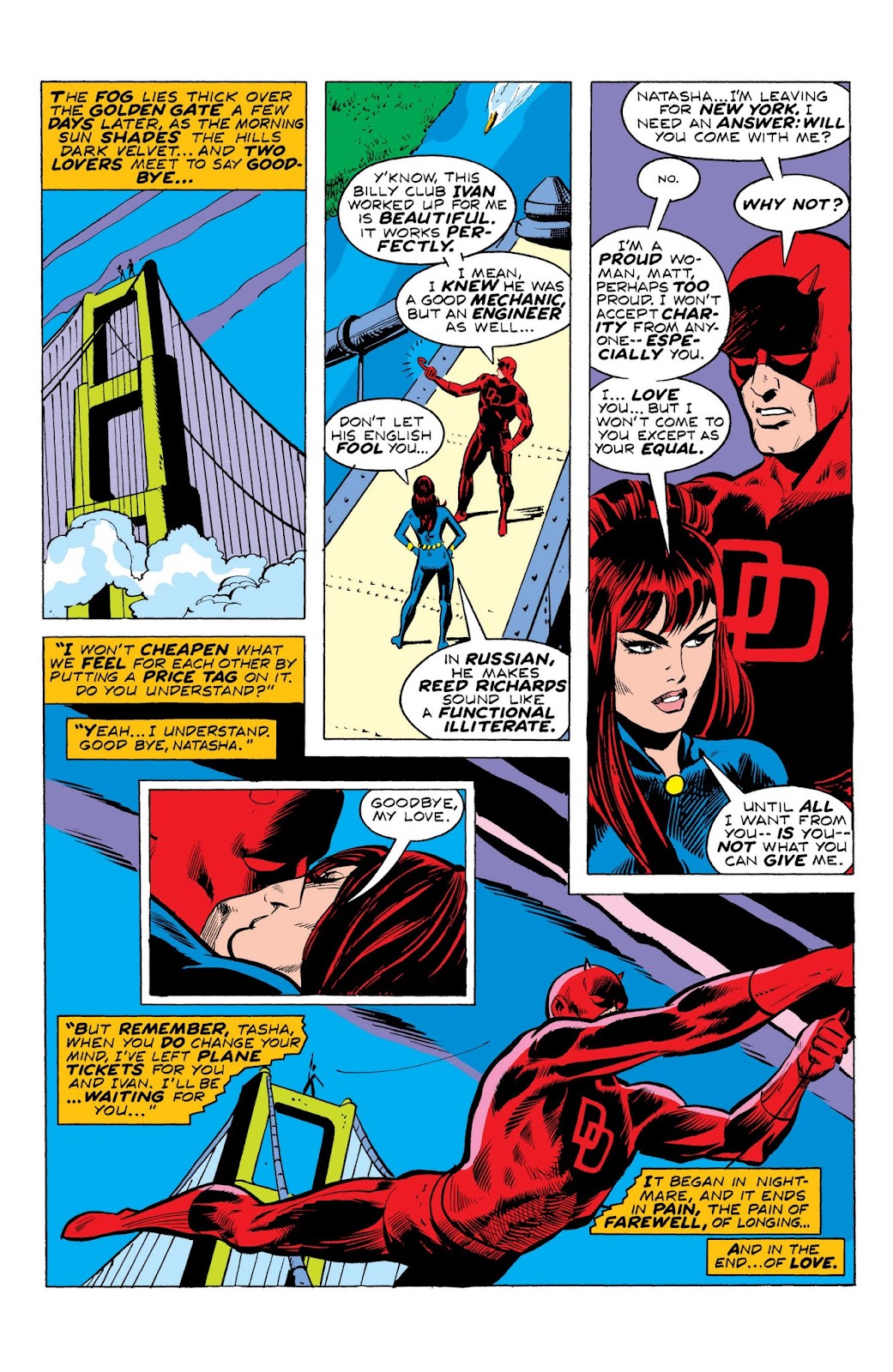 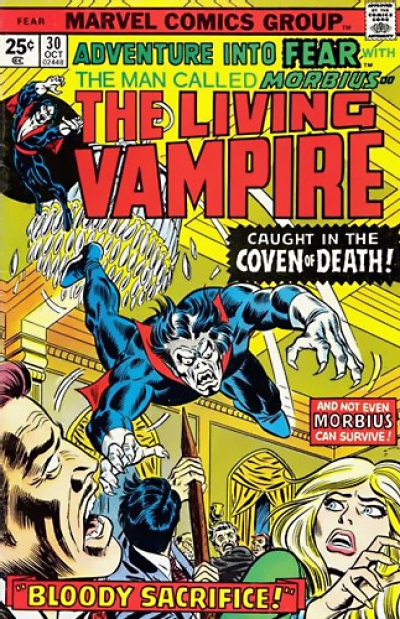 At this point Morbius teams up with Stroud.

At the police station, Morbius’s girlfriend Martine is unable to convince the cops of the dangers of a vampire, until the vampire breaks loose.

Morbius and Stroud have their own problems, with Morbius going crazy with bloodlust right before they crash into a party full of vampires!