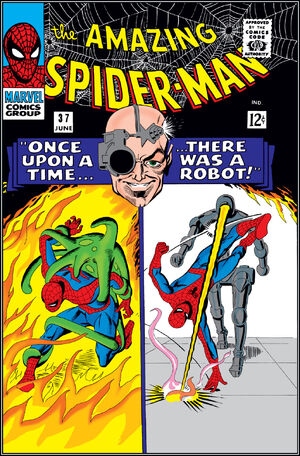 Professor Stromm is released from prison and is picked up by ex-con Max Young. Frederick Foswell watches as his ex-cell-mate is up to something and tries to follow. Someone tries to shoot Foswell, and Spider-Man stops it and follows Foswell. After he loses him, Pete returns to The Daily Bugle for his whereabouts. He arrives and explains that Stromm has threatened revenge on the man who set him up for prison. Back at school, Pete tries to talk to Gwen and her temper flares up, but as she begins to slap him, he stops her hand. Gwen notices Flash threaten Peter and not flinch and notices she’s defending Pete. Meanwhile, Stromm has created a remote-control robot and sends it to Oscorp. As it destroys the labs, the robot latches onto Spider-Man and is destroyed when he jumps into a fire. Professor Stromm begins another robot with a destruction beam. Osborn arrives at Oscorp and knows it’s Stromm but can’t say since he double-crossed him. Spider-Man goes to follow Foswell/Patch and he leads him to the Professor’s hideout when Patch is grabbed. The robot is set loose so Spider-Man attaches a tracer to the robot to save Patch. Both are trapped as the robot reaches Osborn and begins to destroy his office. As Spider-Man enters to save Osborn, he’s upset about ruining his plans. As Spider-Man fights the robot, Osborn knocks him out and the robot leaves him for dead, returning home. Spider-Man follows and destroys the robot in Stromm’s lab. As Stromm surrenders, he begins to tell his story but is killed by a rifle. As J. Jonah Jameson gives the news to Osborn about Stromm’s death, he leaves and Osborn is seen cleaning his rifle. Pete starts to question how the rifleman disappeared so suddenly without a trace. 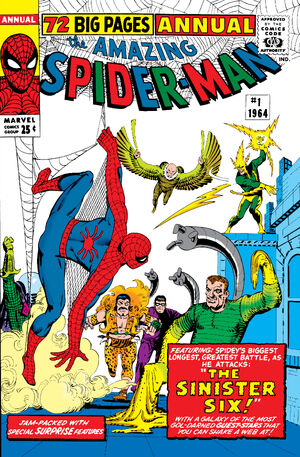 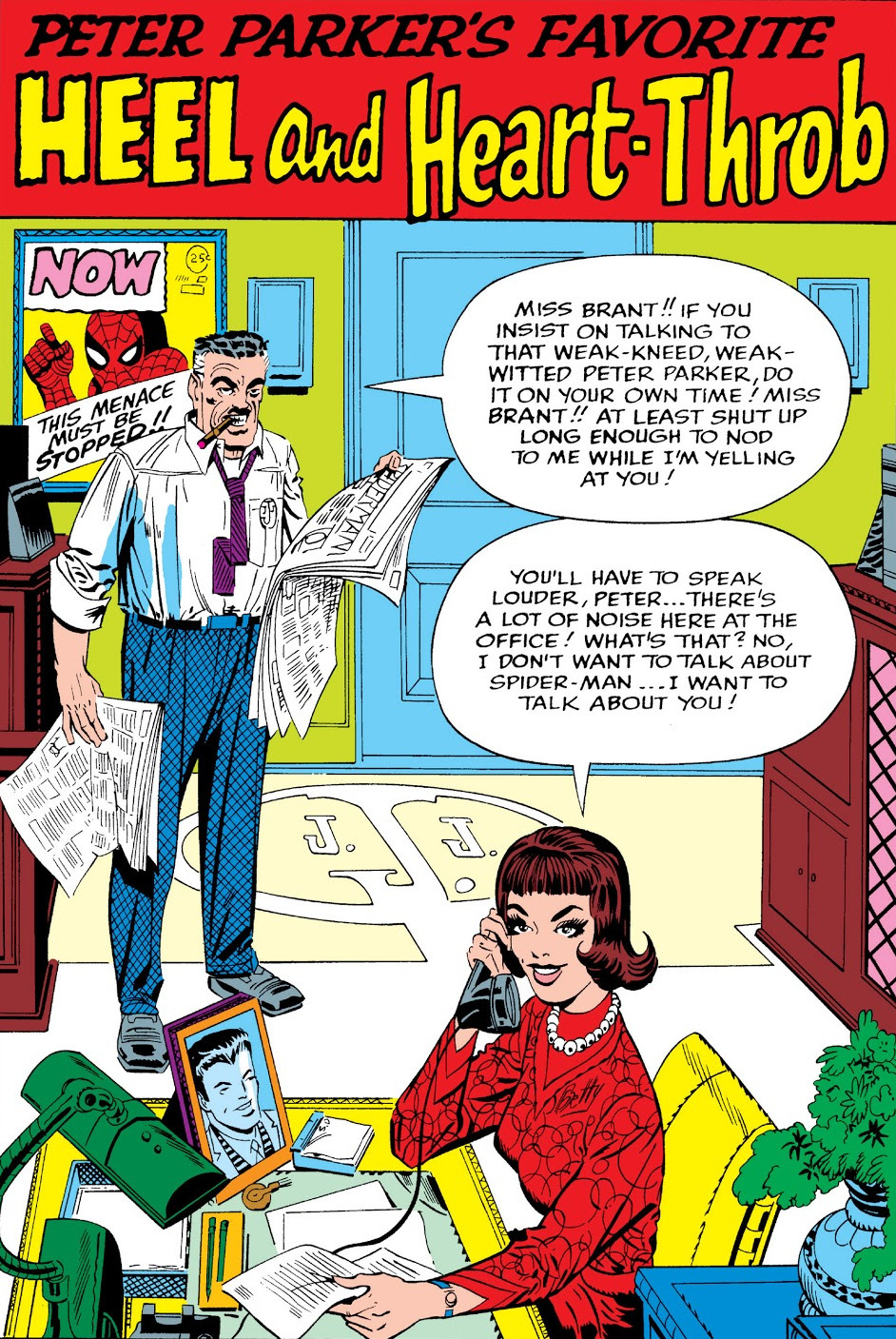 The pin-up spotlights “Peter Parker’s Favorite Heel and Heart-Throb”, meaning, of course, J. Jonah Jameson and Betty Brant… in that order. Jonah is standing in front of a framed reproduction of a Spider-Man cover from Now Magazine with the cover copy reading, “This menace must be stopped!” He chomps on a cigar, holds the Daily Bugle in his hand (The Bugle is NOT a tabloid at this time, by the way.) and yells at Betty for talking to “that weak-kneed weak-witted Peter Parker” on his time. Betty sits at her desk, which has a framed portrait of Peter on it. She chats with Pete on the phone telling him to speak louder since, “There’s a lot of noise here at the office.” Note also, the JJJ monogram on Jonah’s floor and lapel, the notepad on Betty’s desk that has the initials S.D. and Betty’s very snazzy pearl necklace. 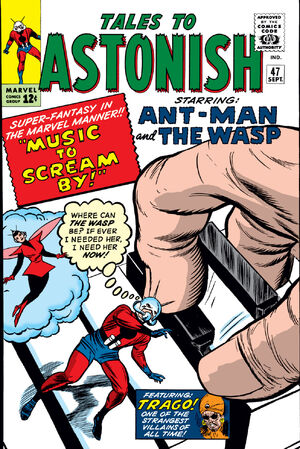 After preventing international criminal Ramond Theis from stealing the diamond known as “The Star of Ghama”, the grateful owner tells Ant-Man and Wasp a tale from his native India about a man named Ghazandi who’s music could hypnotize people and that his only weakness is playing the wrong note and be subject to hypnosis himself.

On their way back home, Ant-Man and Wasp fly past a club where musician Trago is featured playing Jazz. The Wasp convinces Ant-Man to go back there with her in their civilian guises of Henry Pym and Janet Van Dyne. After the show they happen to witness Trago robbing the club owner’s cash box. Dawning their identities of Ant-Man and the Wasp, the two heroes easily stop Trago and return the money. The club owner decides not to call the police if Trago promises to return to his native India, Trago complies.

Two months later, in India, Trago manages to find the home of Ghazandi. Recalling the stories of Ghazandi’s musical powers manages to convince the aged wise man to teach him how to play hypnotic music. Many months later Trago returns to the United States and begins performing in clubs again.

Successfully using his hypnotic music to enthrall people, Trago manages to get himself into a radio station where he broadcasts his hypnotic music all over the city. There he calls on the people to try and find Ant-Man and Wasp, who are also effected and stunned by the music. Ant-Man’s ants carry the two heroes deep into an ant-hill in an attempt to shield them from the music. Realizing his current plan isn’t working, Trago commands local snakes to start searching for Ant-Man and Wasp.

In the ant-hill, the duo are attacked by a snake and use their shrinking gas on it, but not before Ant-Man’s faithful ant Korr sacrifices it’s life to save him. Traveling to the radio station, Ant-Man gets inside Trago’s trumpet, and while his ants distract Trago he bends part of the instrument out of shape. This causes the next note to effect Trago instead of his audience, causing him to forget his criminal intentions and become a legitimate musician. Ant-Man and Wasp decide to let Trago go because he had not committed any real crime.

We end with Hank and Janet both listening to Trago, as he now has no memory of the incidents. Hank is still saddened by the loss of his ant, Korr, so Jan and him both walk home together. 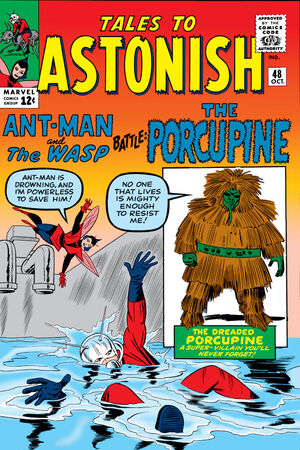 Streaking off on another adventure, Ant-Man points out to the Wasp the location of a local army ordinance plant. Inside the plant we meet Alex Gentry, a scientist who works for the ordinance plant. Having designed combat armor based on the quills of a porcupine, he has become frustrated with the lack of recognition and pay that he receives from the military for his inventions. Seeking fortune, he decides to use his porcupine armor to rob a new bank that is opening that has been boasting a burglar proof safe in the newspapers.

The next day, Ant-Man and Wasp (in their civilian guises of Henry Pym and Janet Van Dyne) visit the bank to see a demonstration of the bank vault. Pym notices that Janet is coming down with a cold and tries to talk her into going home, which she refuses. Just then, Gentry (in his combat armor and calling himself “The Porcupine”) arrives and uses his liquid cement quills to disarm the guards and then fills the room with sleeping gas. As Pym tries to drag Janet out of the sleeping gas, the Porcupine uses a built in acetylene torch to burn through the vault. While our two heroes seek refuge and fresh air in one of the bank’s offices, the Porcupine manages to steal the banks money and uses his jet pack to escape. Dawning their guises of Ant-Man and the Wasp, the two heroes find that they are too late. When the Wasp starts to get really dizzy, Ant-Man takes her home and confines her to a bed telling her not to leave it until she gets better.

Worrying about Pym, Janet learns where Ant-Man had gone from the ants and resumes her guise of the Wasp to rescue him. The two devise a trap using one of the Porcupines own gimmicks: liquid cement.

Taking a bunch of containers of the compound and putting them in bags, the two heroes wait for the villain to return. When the Porcupine finally arrives, they have their ants squeeze the bags, shooting jets of liquid cement that coats the Porcupines quills with the glue, rendering his offensive capabilities useless. Finding himself overwhelmed by Ant-Man’s human sized strength the Porcupine manages to escape via his jet pack (which wasn’t effected by the glue.)

Taking the visibly distraught Wasp home (She was afraid that he would’ve drowned,) Ant-Man promises to have something for her when they get there, but what Janet figures might be a monetary gift of jewelery or a ring, turns out to be plain old cough medicine. “Henry Pym, I HATE you!”