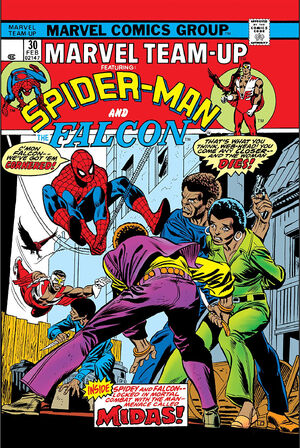 After a patrol, Peter Parker is changing out of his Spider-Man
costume when he hears a scream from the streets below. Dutifully putting
his mask back on, Peter spots his neighbor, Glory Grant being attacked
by a group of men.

Spider-Man gets between Glory and her attackers.
Worried about having another false murder accusation lobbed against him,
the wall-crawler pulls his punches on these thugs, even though they are
coming at him at full force. Dodging a bullet, Spider-Man knocks out
the attackers, with some assistance from Glory Grant. Now that Glory is
safe, she asks Spider-Man to do her a favor and carry her attackers up
to her apartment. The web-slinger complies to this strange request, and
when he asks why he learns that one of these thugs is her cousin, Ramon.

As she starts telling him that this is a family affair that she must
deal with alone, Ramon suddenly wakes up and tries to attack them again.
Noticing the youth is in a trance, Spider-Man wraps him up in webbing
to stop him from hurting anyone.

Suddenly, Ramon snaps out of it and
tells them what happened to him. He explains that he and his friends
went to a local nightclub where they were grabbed and drugged by some
goons. They were then taken into the back of the establishment where a
man in a gold suit sprayed them with something, and that was the last
thing he remembered. Glory heard about this golden man, and how there
were rumors about him wanting to wipe out African-Americans. Hearing
this, Spider-Man is furious and decides to deal with this mystery foe
and swings off.

With Spider-Man gone, Glory places a call to the office of Sam
Wilson in Harlem.

Hoping it’s Captain America, Wilson instead learns
that it is from Glory Grant. After she tells Sam everything she knows,
Wilson changes into the Falcon and goes out to investigate this new
lead.

The two heroes descend on the nightclub, unaware of each other
until they both come crashing in through the main entrence. Their foe, a
golden garbed man named Midas, orders his men to kill them.

While
Spider-Man webs up on half of the shooters, the Falcon tangles up the
rest in a massive show curtain. During the confusion, Midas escapes,
leaving the heroes to try and get answers from his minions. The Falcon
tells Spider-Man to let him talk to the thugs as he speaks their
language.

Going outside, Spider-Man hears the sound of a ruckas inside
as the Falcon beats the location of their employer out of them. When the
Falcon emerges from the club, he tells Spider-Man that Midas is
actually Harrison Merriwell. This comes to a shock to Spider-Man, as
Merriwell is a well-known philanthropist.

The pair travel to Merriwell’s estate located in a suburb of
Connecticuit and decide the best way to announce their presence is to
come up and ring the doorbell. The butler is surprised to see two
costumed individuals standing on the door, and invites them in anyway.

No sooner are they inside, Spider-Man and the Falcon are struck from
behind. When the pair awaken, they find themselvse shackled to the floor
of a walkin freezer. There they are then confronted by Midas who tells
them that he is leaving them to freeze to death, saying that they are as
insane as his brother.

As Midas turns to leave, Spider-Man fires some
wedging the door, preventing it from closing all the way. As the
temperature starts to drop, Spider-Man’s webbing begins to expand,
causing it to force the door open. The noise draws down people who are
attending a party downstairs.

Upstairs, they accuse Harrison’s brother Malcolm of being Midas
and trying to murder them. Malcom denies this but when the two heroes
try to apprehend him, he fights back.

Admitting that he did so to
prevent his brother from squandering their fortune on the unfortunate.
While trying to fight back, Malcolm is knocked out of a window when the
Falcon literally pulls the rug out from under him, sending him into the
river below the window. Harrison is not surprised that his brother was
doing this, and fears that he is somehow responsible because he didn’t
pay enough attention to his brother. The Falcon and Spider-Man tell him
that all Midas ever cared about was gold. 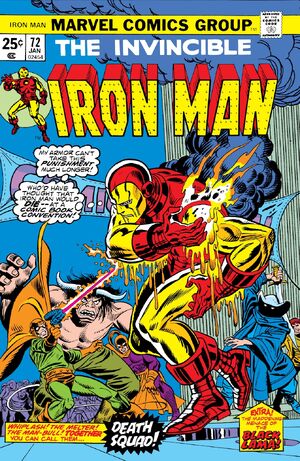 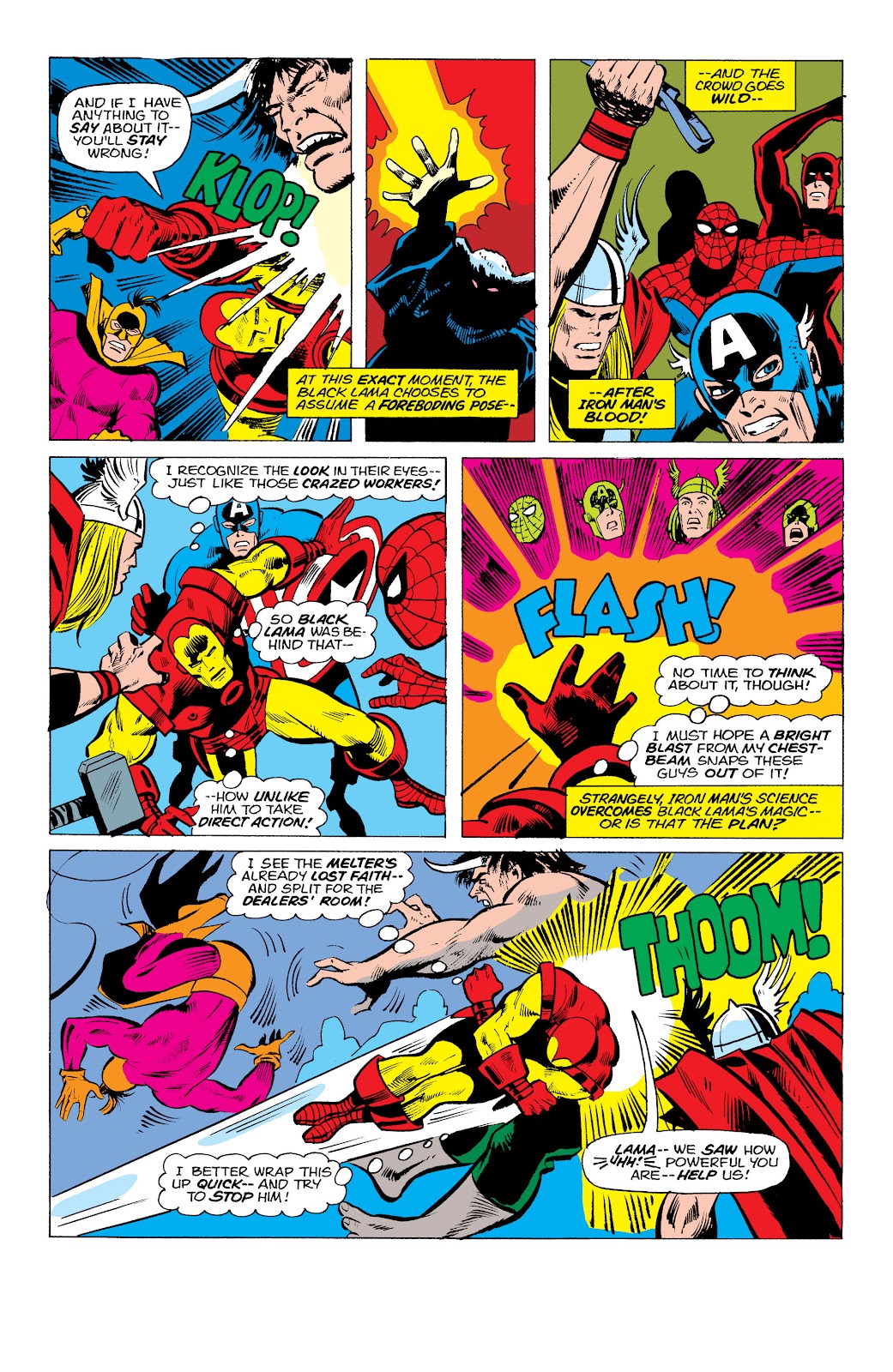 Iron Man wins the ensuing melee, during which some comics are set
ablaze. As the Lama steals up behind Iron Man with a scimitar, the
Melter shoots him, wanting the honor of killing Iron Man for himself.
The Lama teleports away, the defeated Death Squad are arrested and Iron
Man is kicked out of the building as a convention crasher. 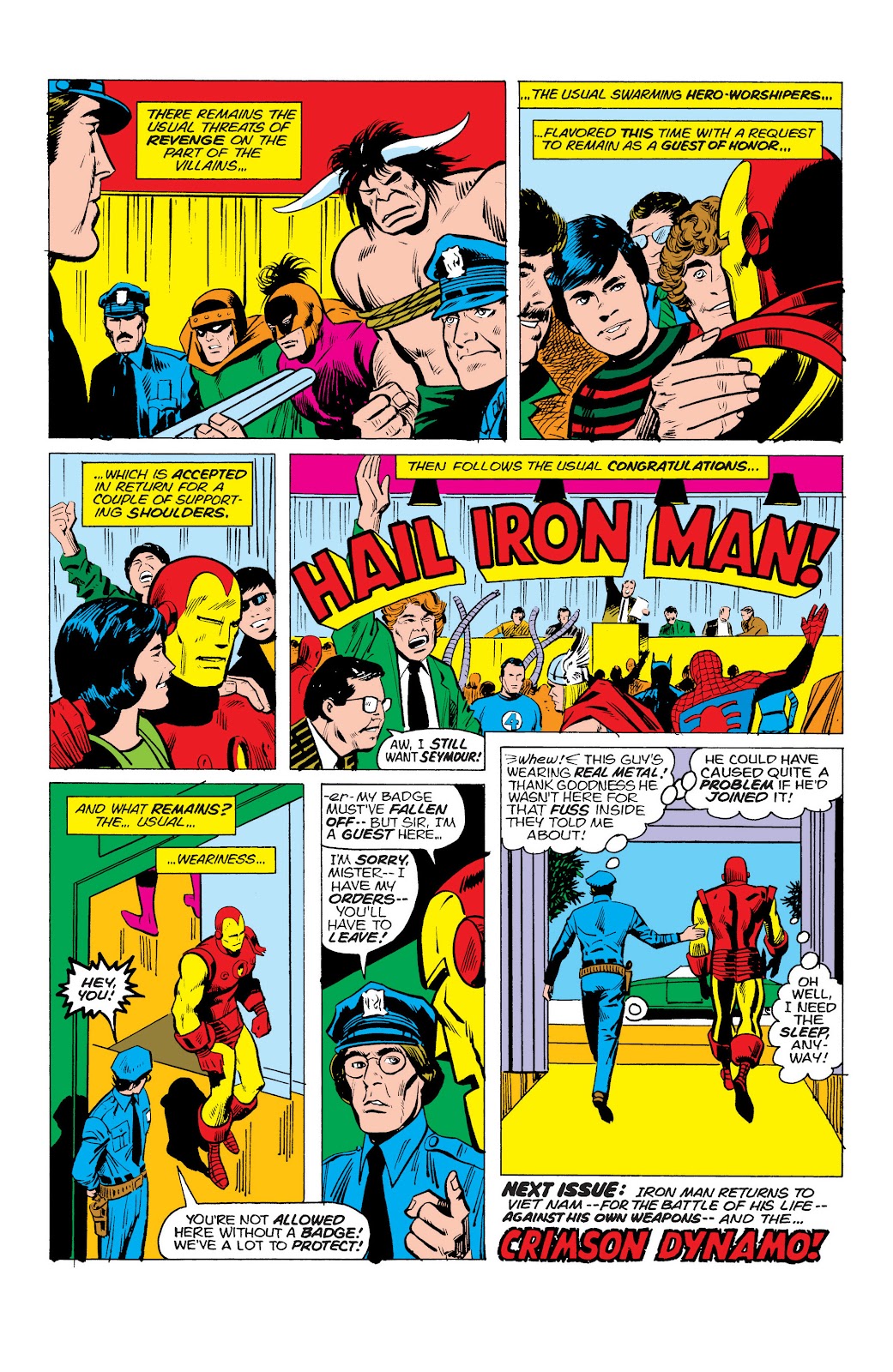 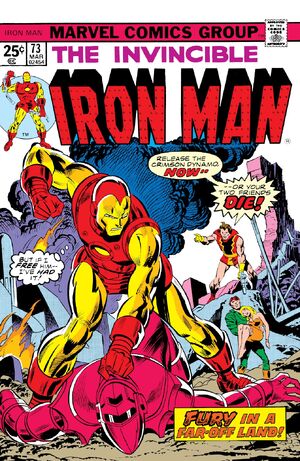 Iron Man checks out the explosion at the Manila factory, finding the
cause in the boiler room. 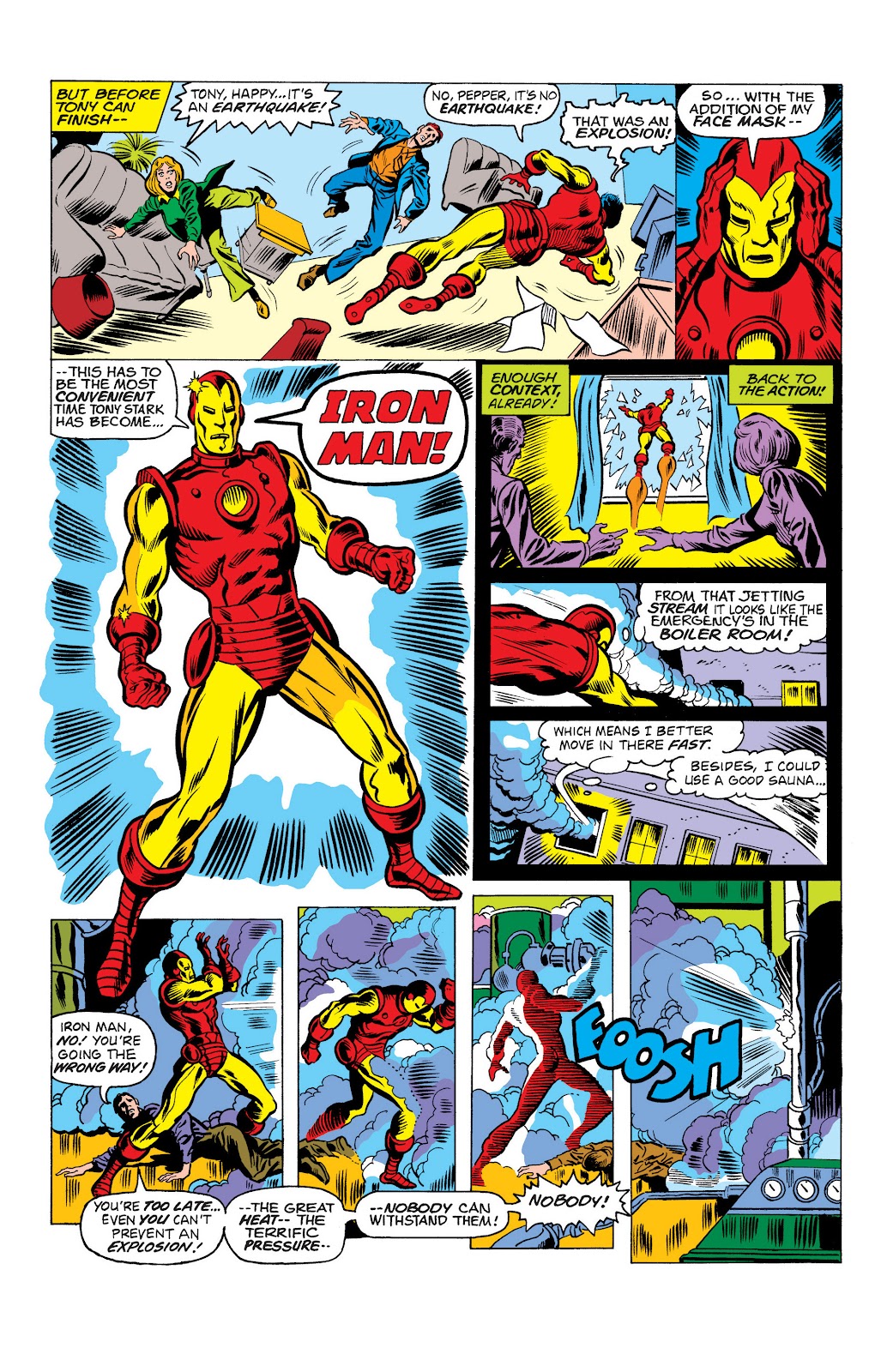 After rescuing some workers he leaves for
Vietnam, where Marty and Roxanne are held captive by Chief Kuon Set over
his niece Shara’s objections. 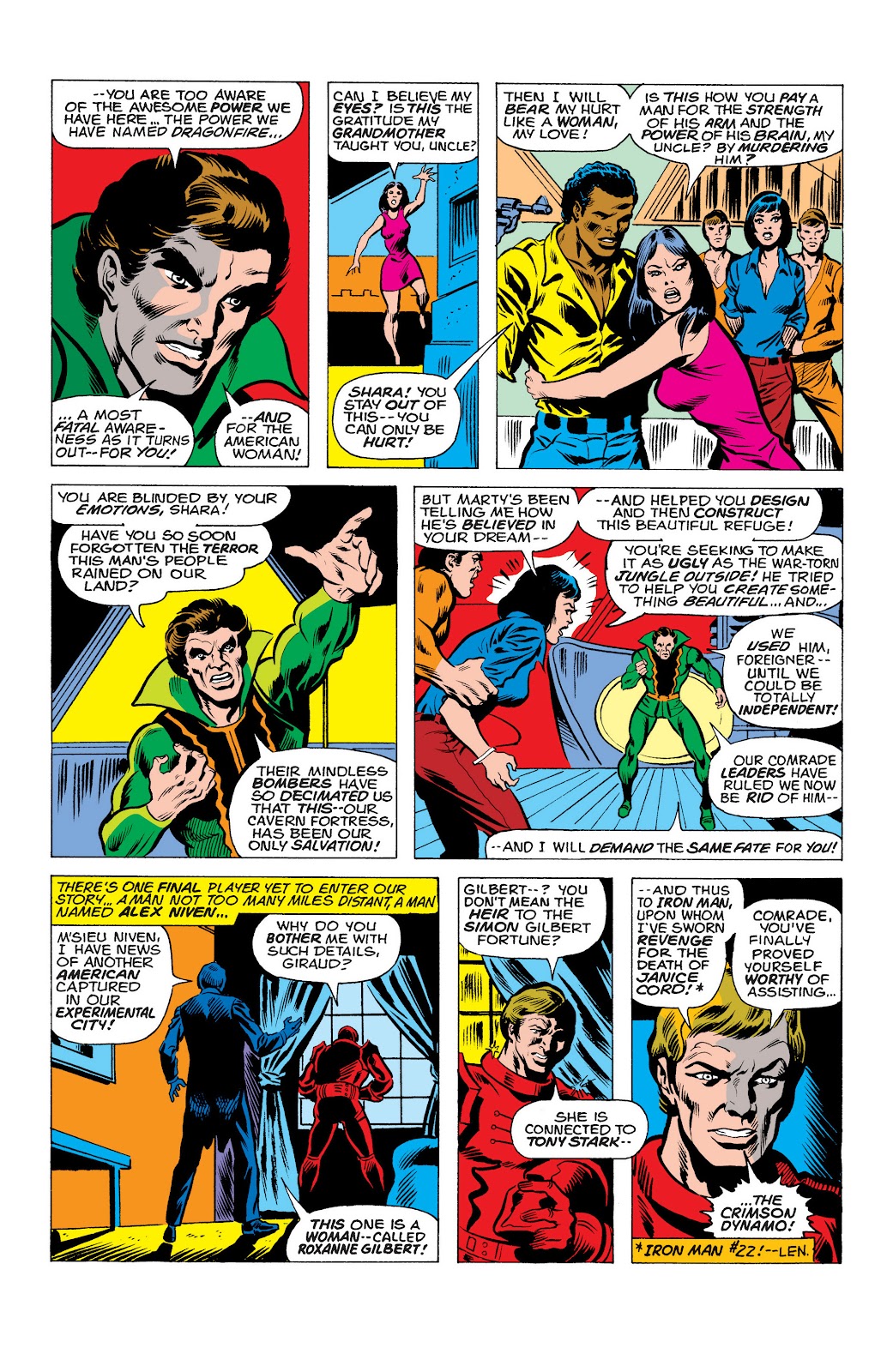 Kuon’s ally, Crimson Dynamo, convinces
him to let Roxanne go, so she can lure Iron Man to them. When Iron Man
approaches, Crimson Dynamo launches heat seeking missiles. Iron Man
barely avoids them. The resulting explosion distracts the Hidden City
guards: Marty and Shara use the opportunity to escape. 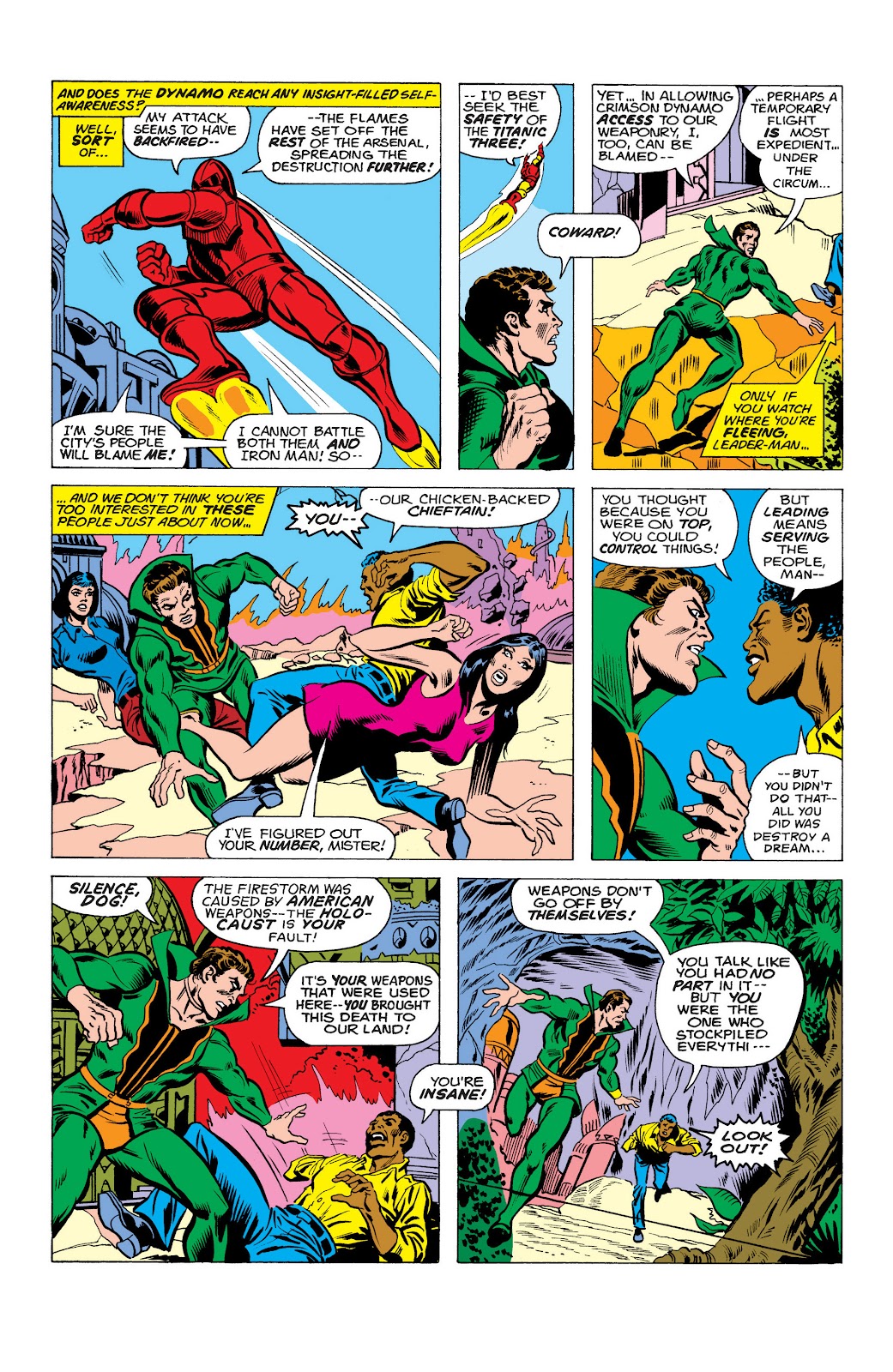 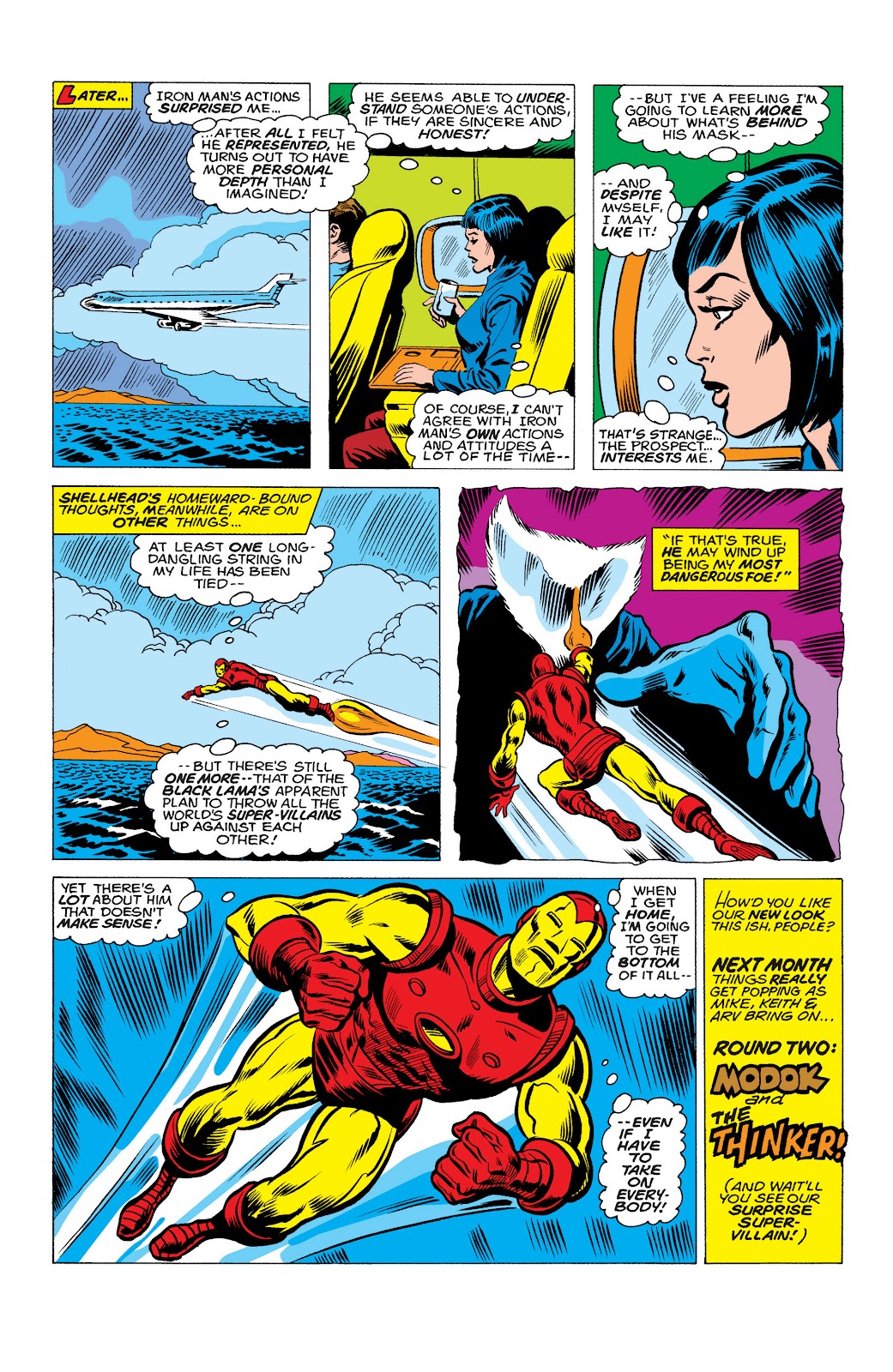 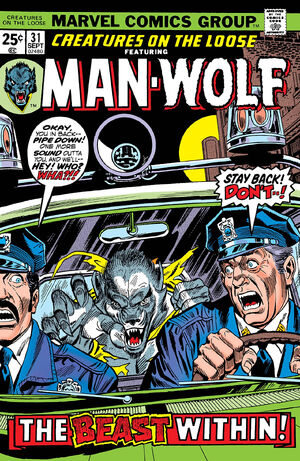 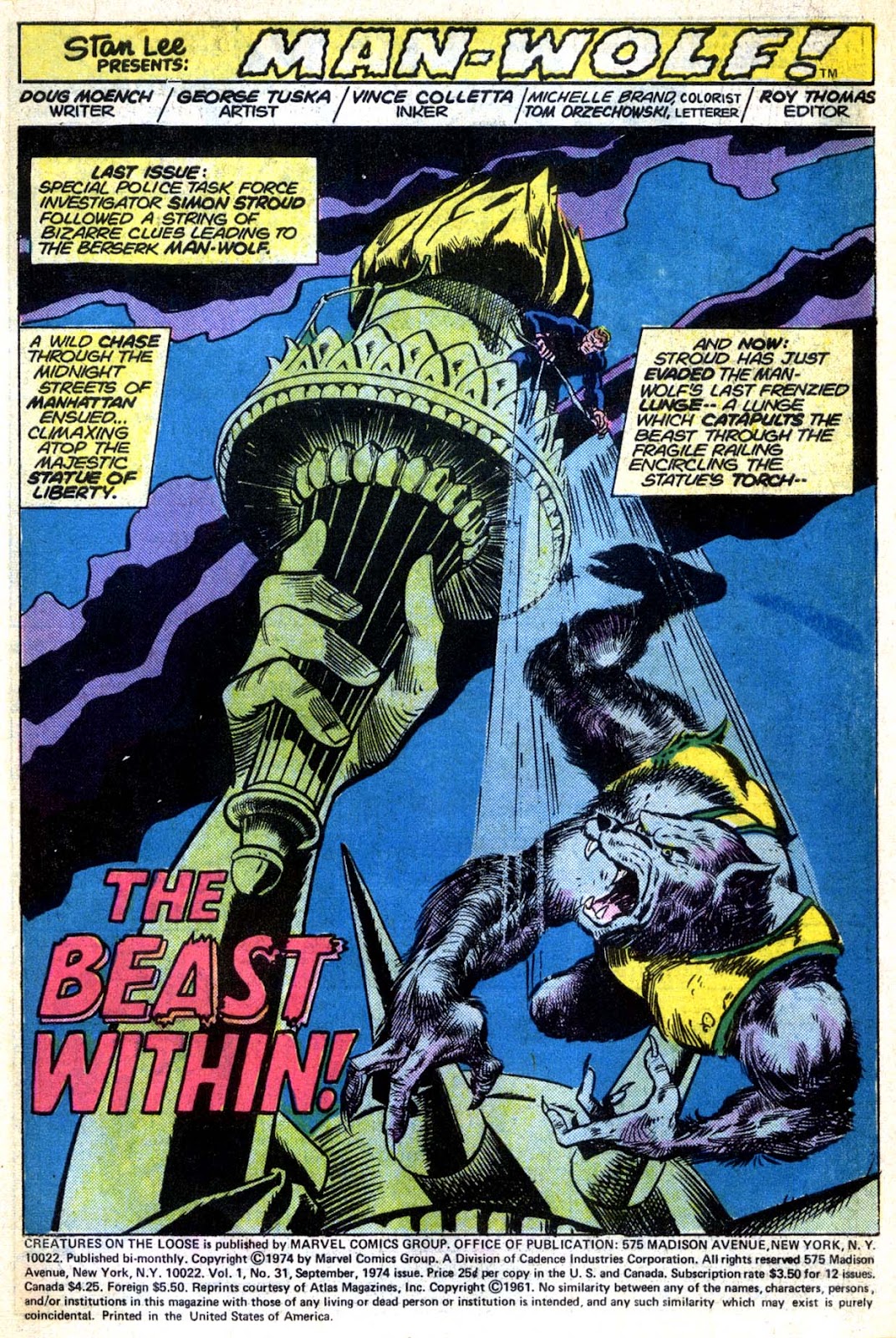 The Man-Wolf survives the fall from the
Statue of Liberty and reverts back to John Jameson. After he goes to his
fathers’s office at Daily Bugle. 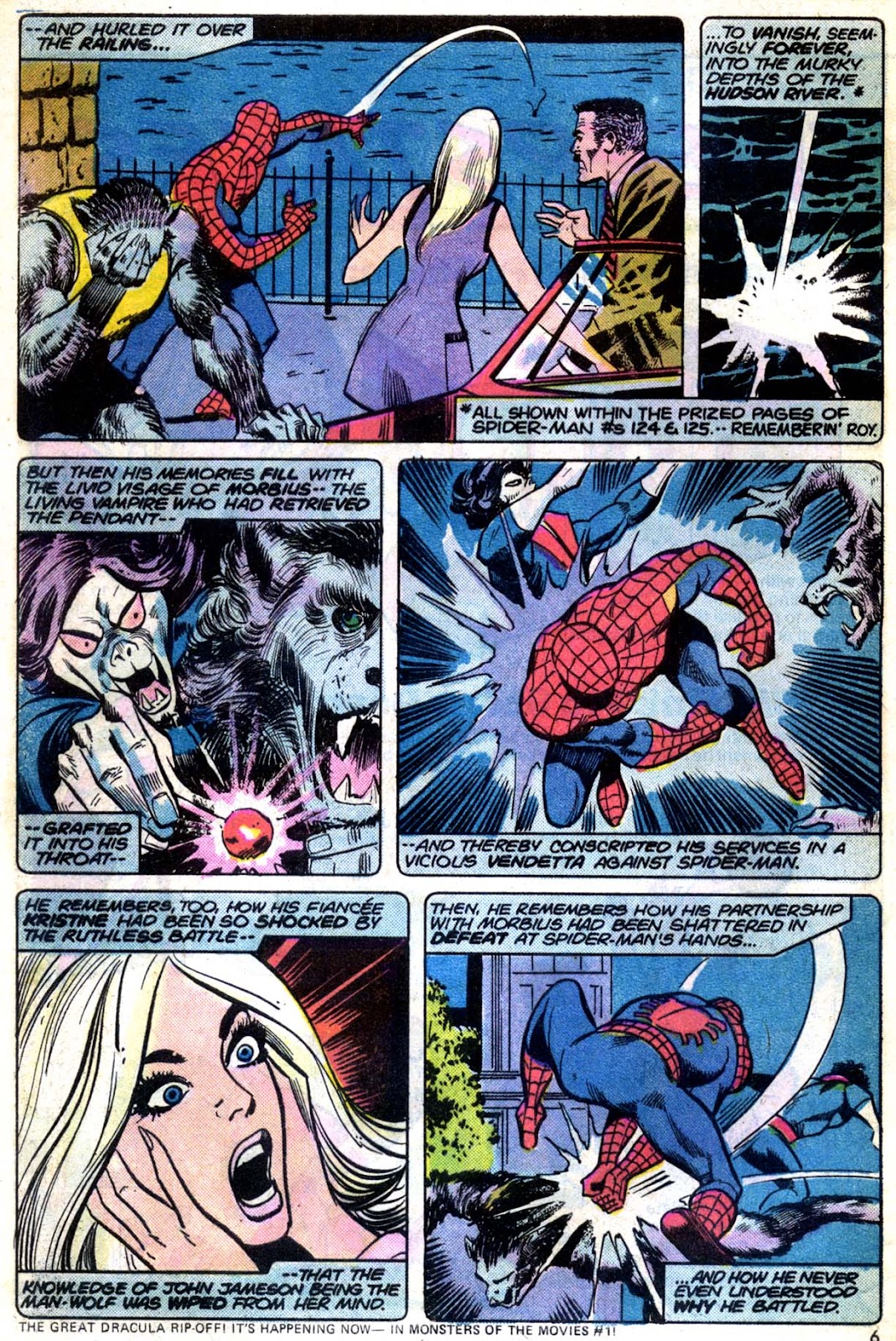 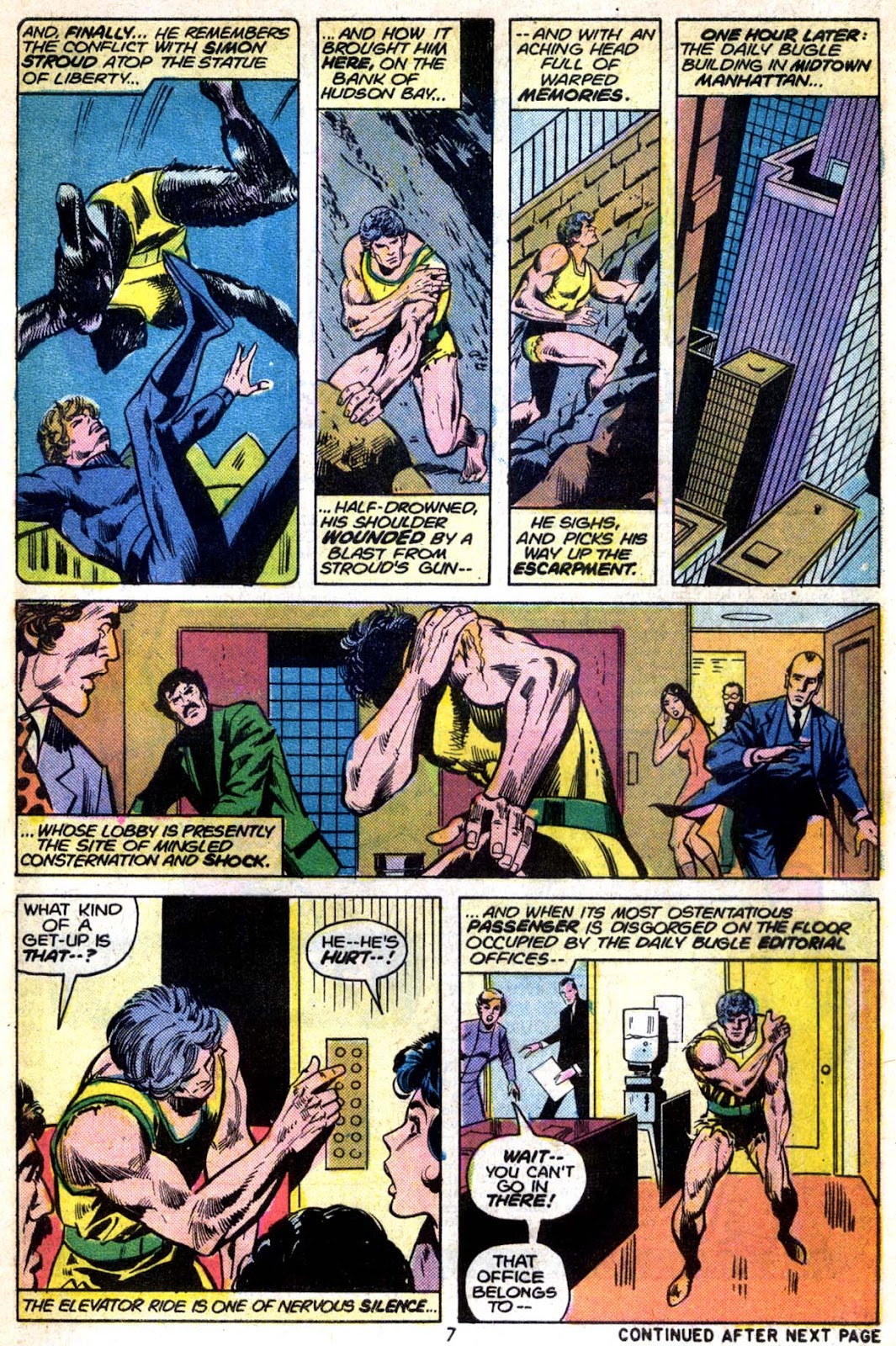