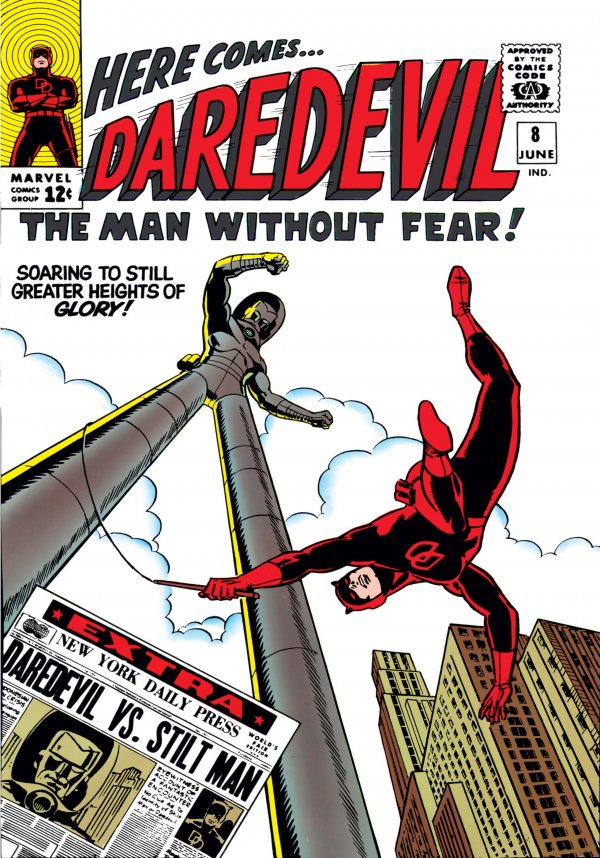 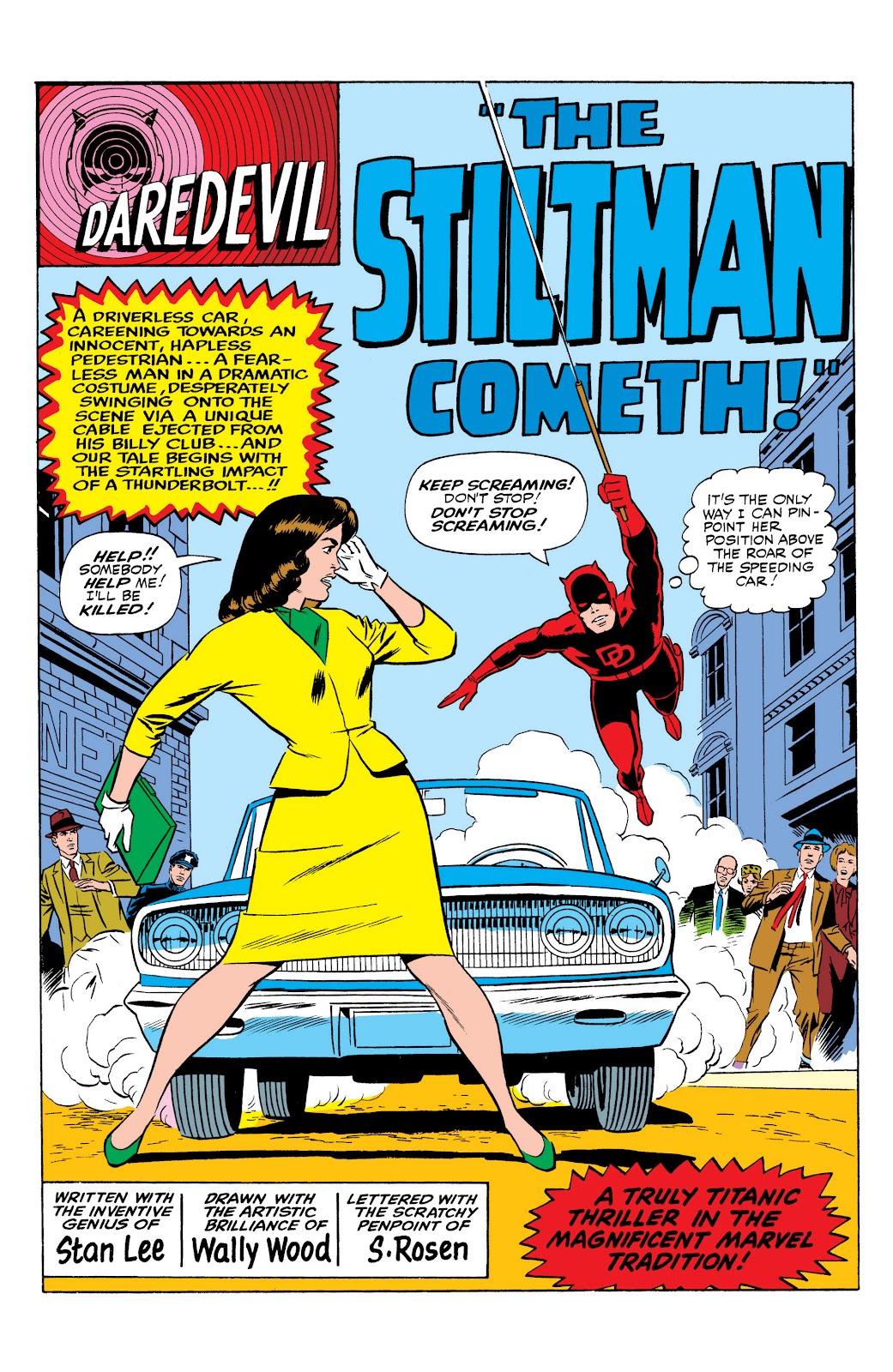 Daredevil saves a woman from an out of control car, however when he hops aboard the speeding vehicle to stop it his radar sense warns him that there is a bomb on board the vehicle. As this is happening, a helicopter carrying a payroll is robbed by a new criminal called Stilt Man. 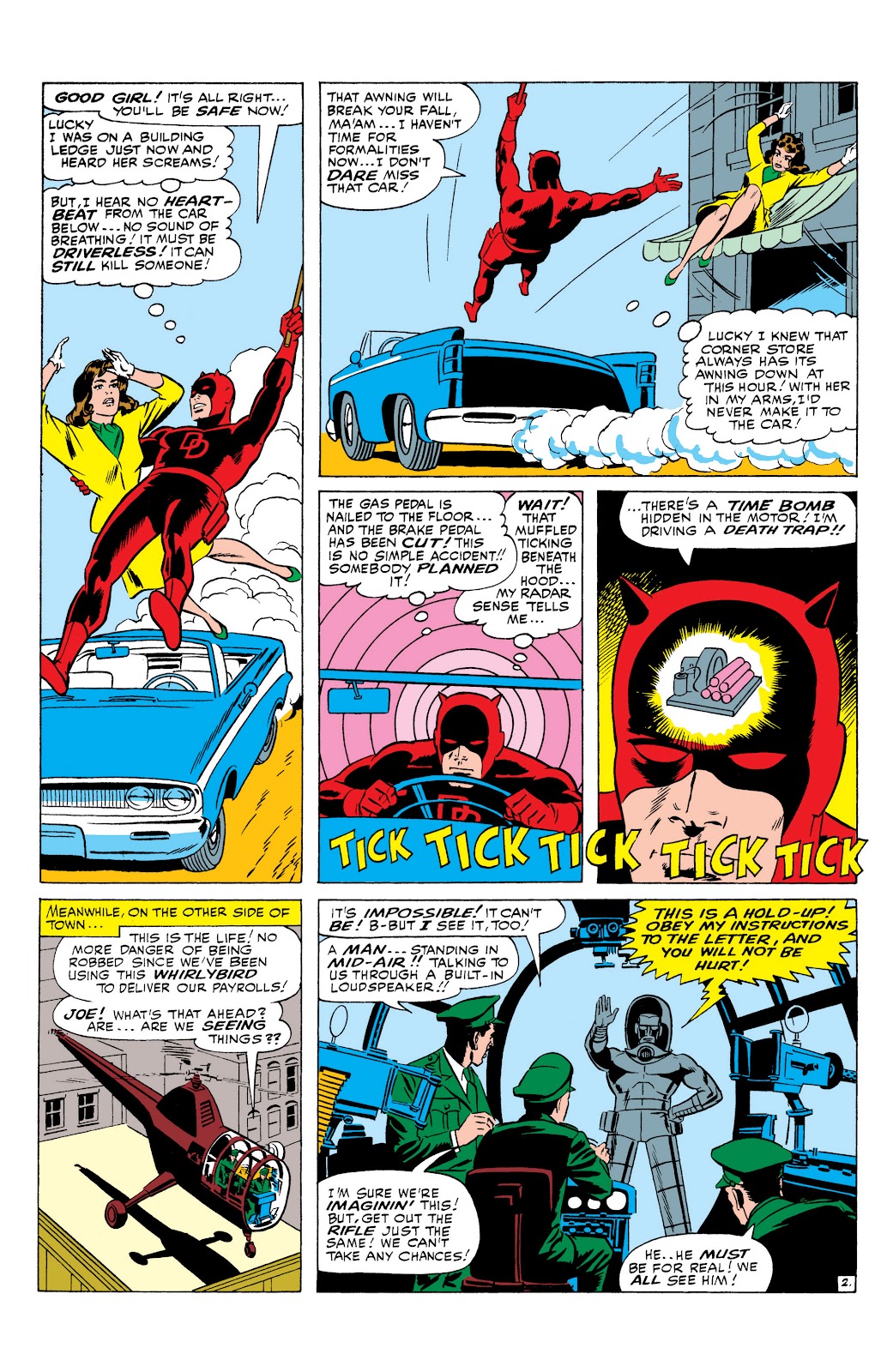 While this is happening, Daredevil manages to drive the car with the explosives into the pier before it can harm anybody else. He soon spots the Stilt Man but is unable to stop him before he can get away.

Later, back in his civilian guise of Matt Murdock, DD is told about Dr. Van Eyck, a doctor from Boston who might be able to restore Matt’s lost eyesight by his secretary Karen. 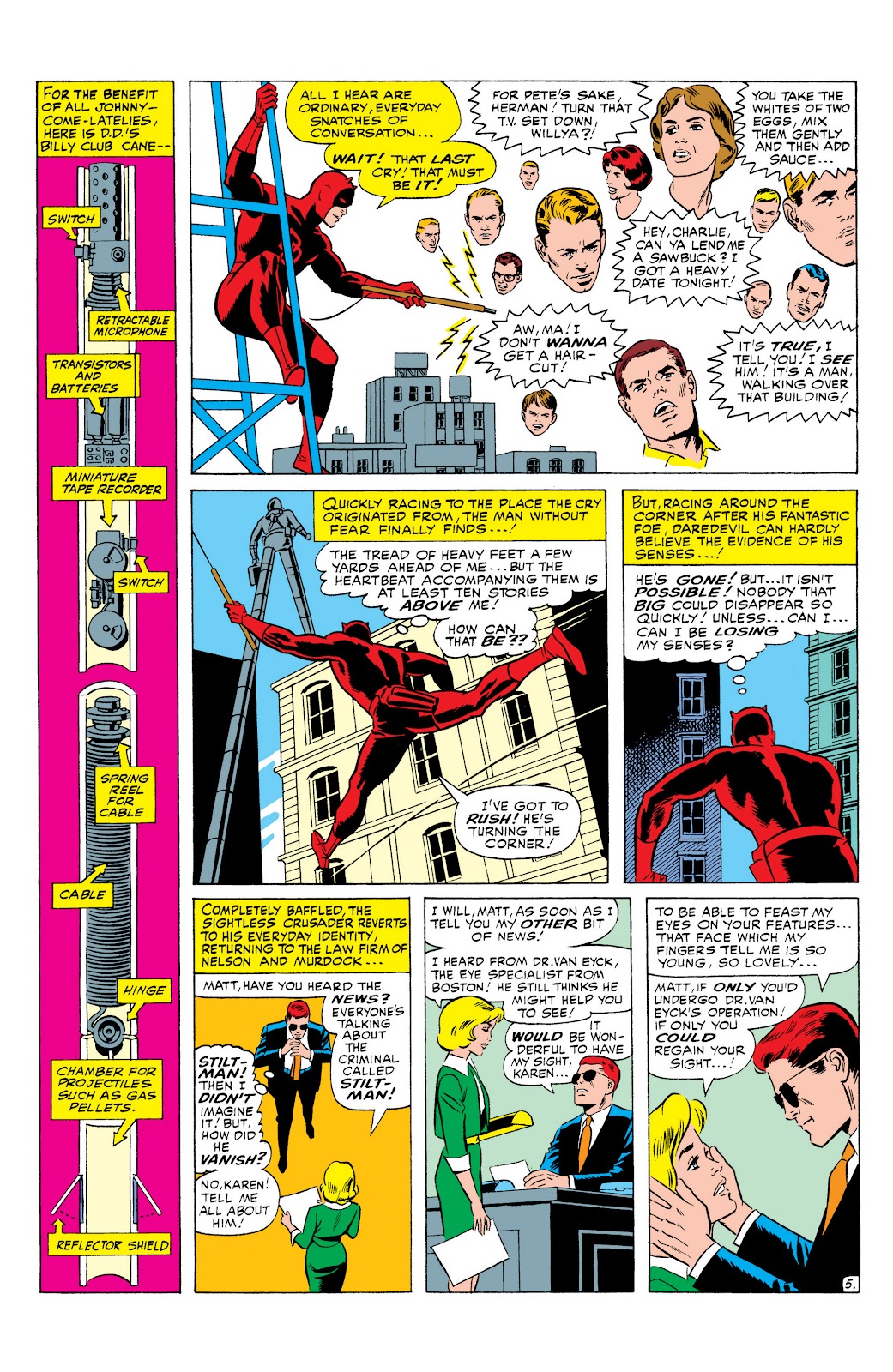 However, before Matt can respond to Karen about if he will seek the treatment, they are interrupted by the entrance of Foggy with Matt’s next client Wilbur Day, a former employee of Kaxton Laboratories, where he invented hydraulic lifts which his boss Carl Kaxton had stolen the patents. Murdock then calls Kaxton to tell him that his former employee intends to sue him, a threat which Kaxton encourages them to follow through on. 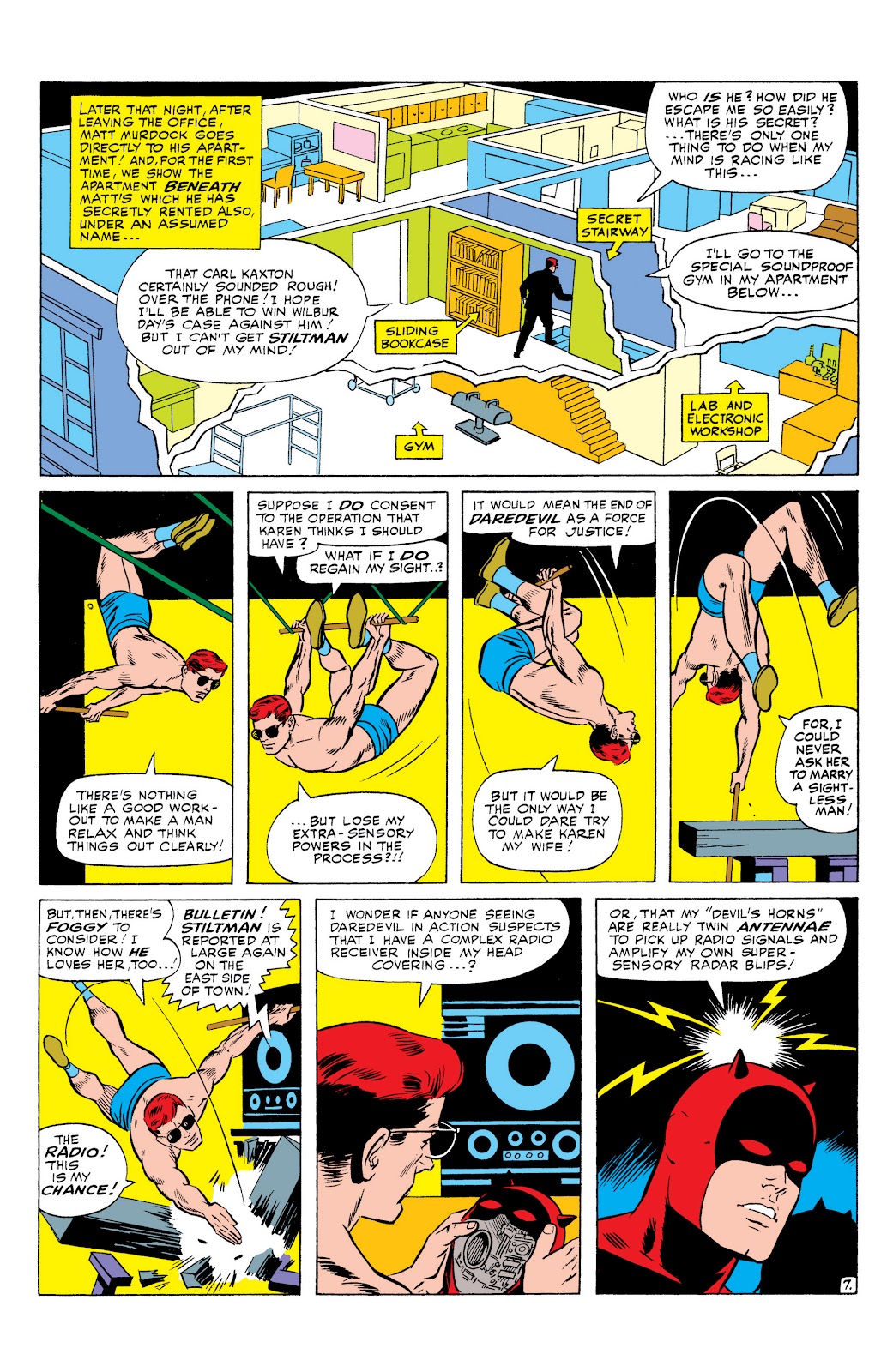 Later in his Daredevil guise, DD unsuccessfully battles Stilt Man, who manages to get away once again. 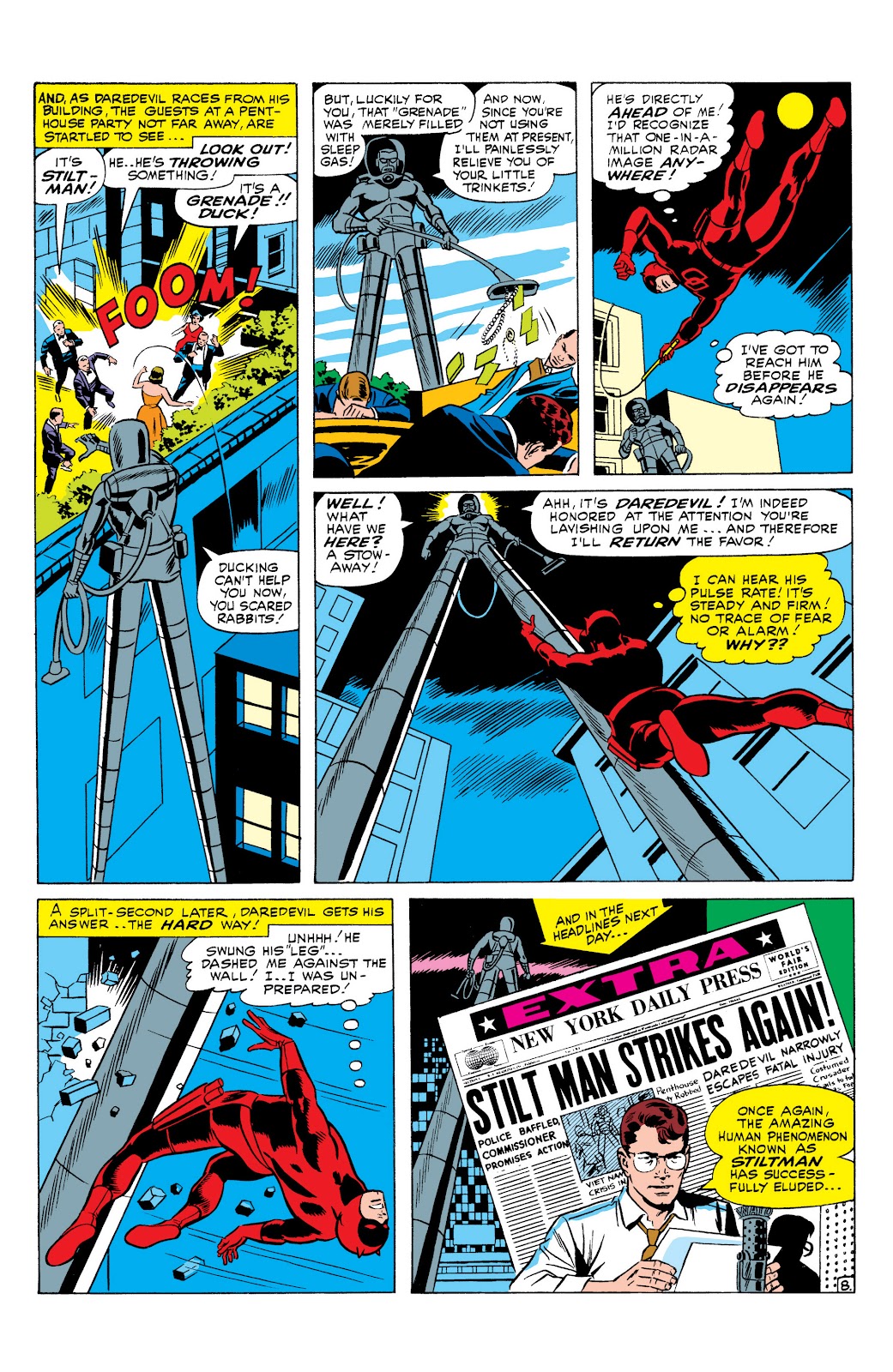 Later, when meeting with Wilbur again, Kaxton arrives at the office to contest the law suit. While the two argue over who owns the rights to the hydraulic device, Matt notices that one of them is lying due to an irregular heart beat, but can’t figure out which one is the liar because they are too close together. 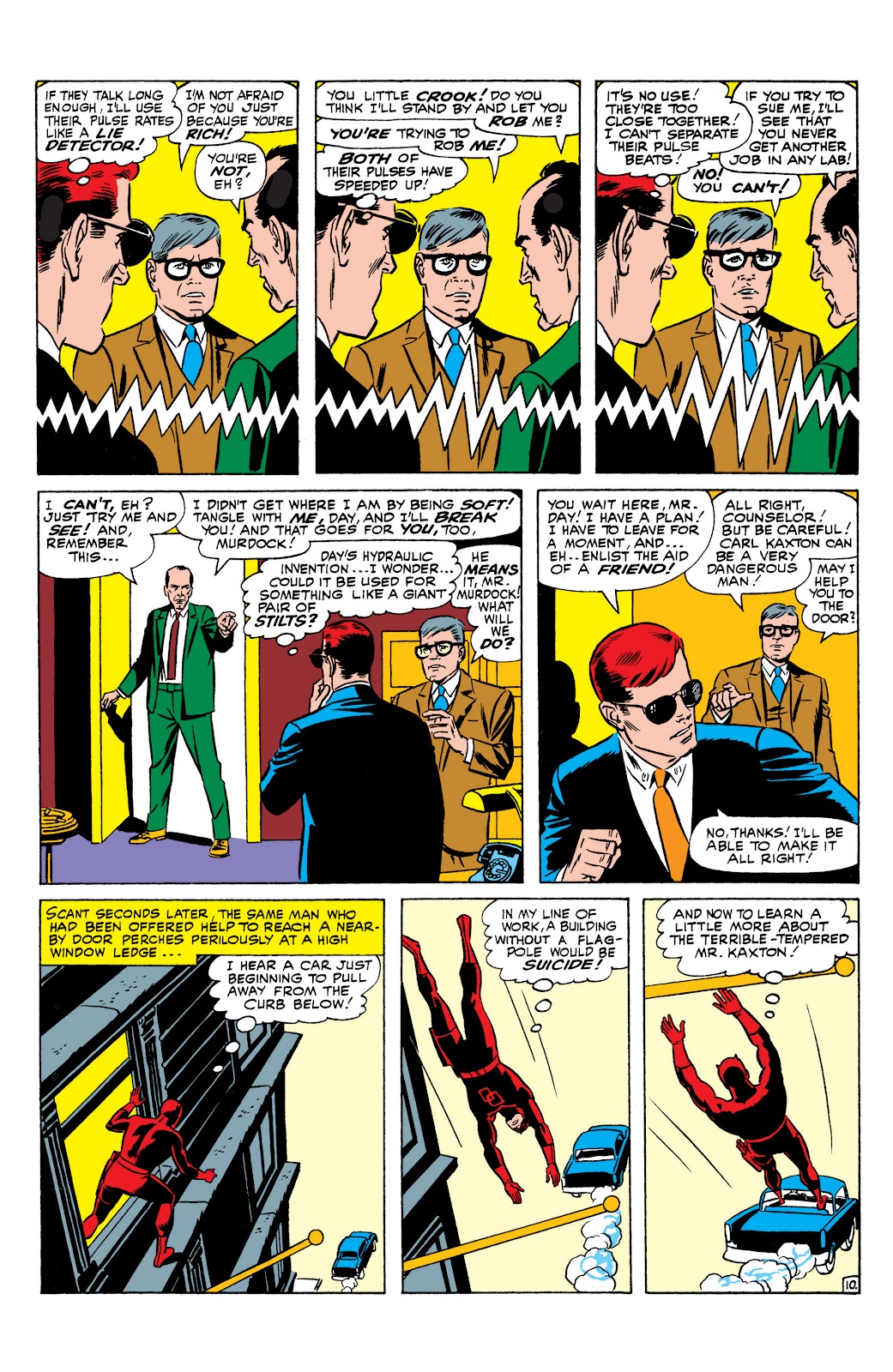 Following Kaxton as Daredevil, he’s quickly shaken off by Kaxton who realizes he’s being followed. DD cannot resume his tailing because of reports that Stilt Man is causing havoc again. He again fails to stop Stilt Man. 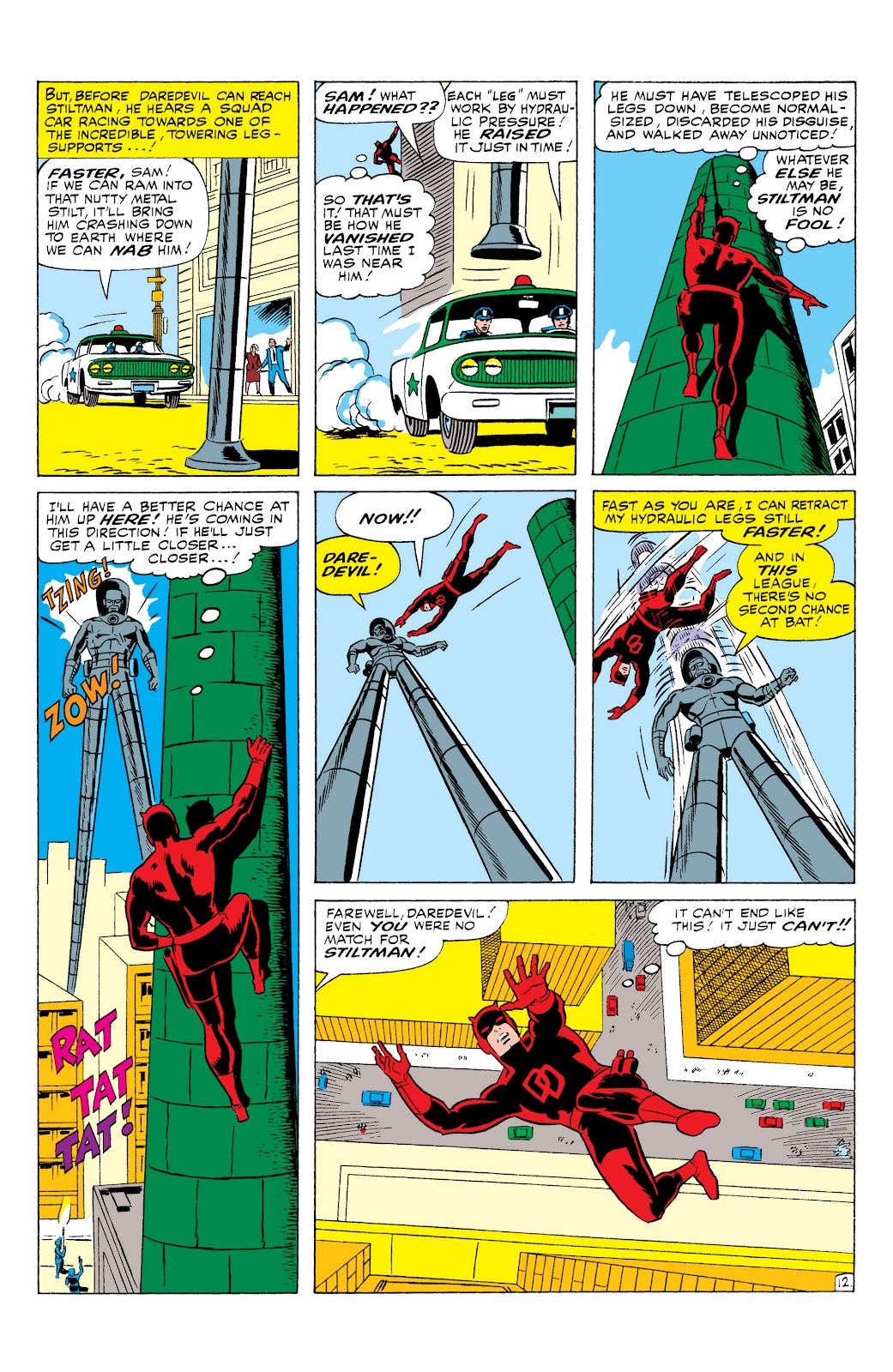 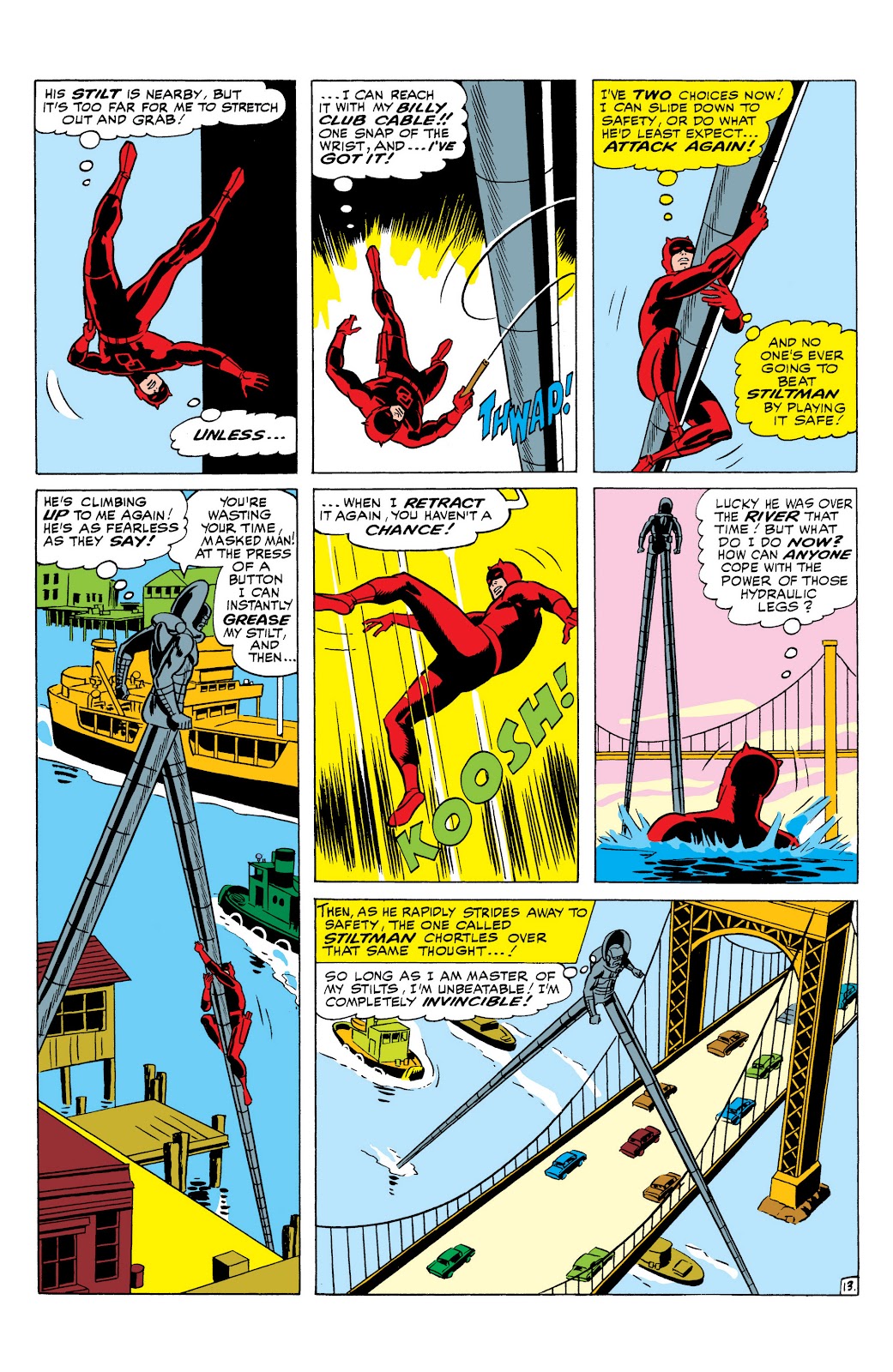 Returning to Day, the two go to confront Kaxton directly. There they find the hydrolic lifts, which turn out to be Stilt Man’s stilts.

Attacked by Kaxton with a gun, Day manages to knock Kaxton out, and then reveals to Murdock that he’s really Stilt Man, and that he came to steal a shrinking device from Kaxton before knocking Murdock out. 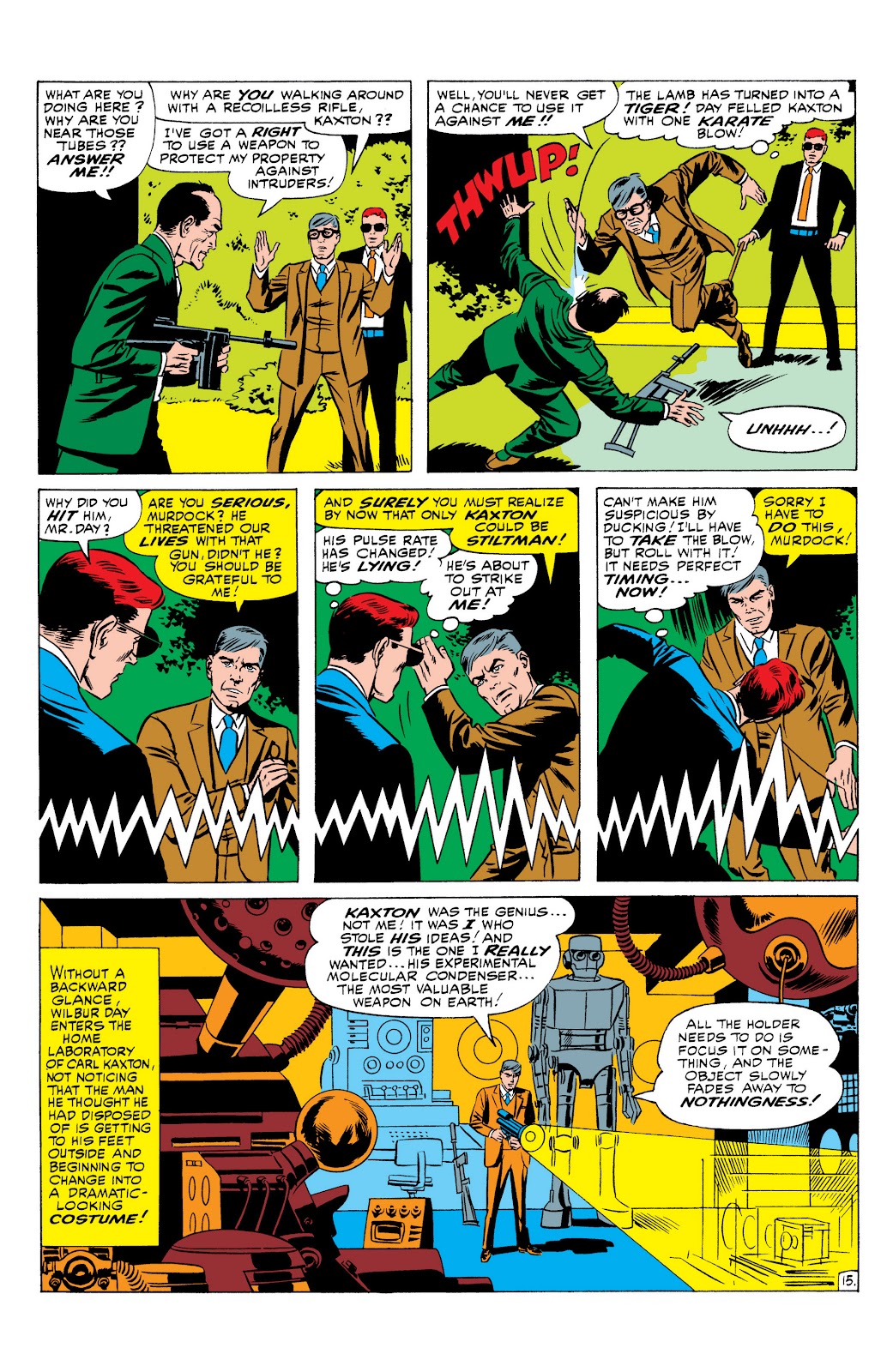 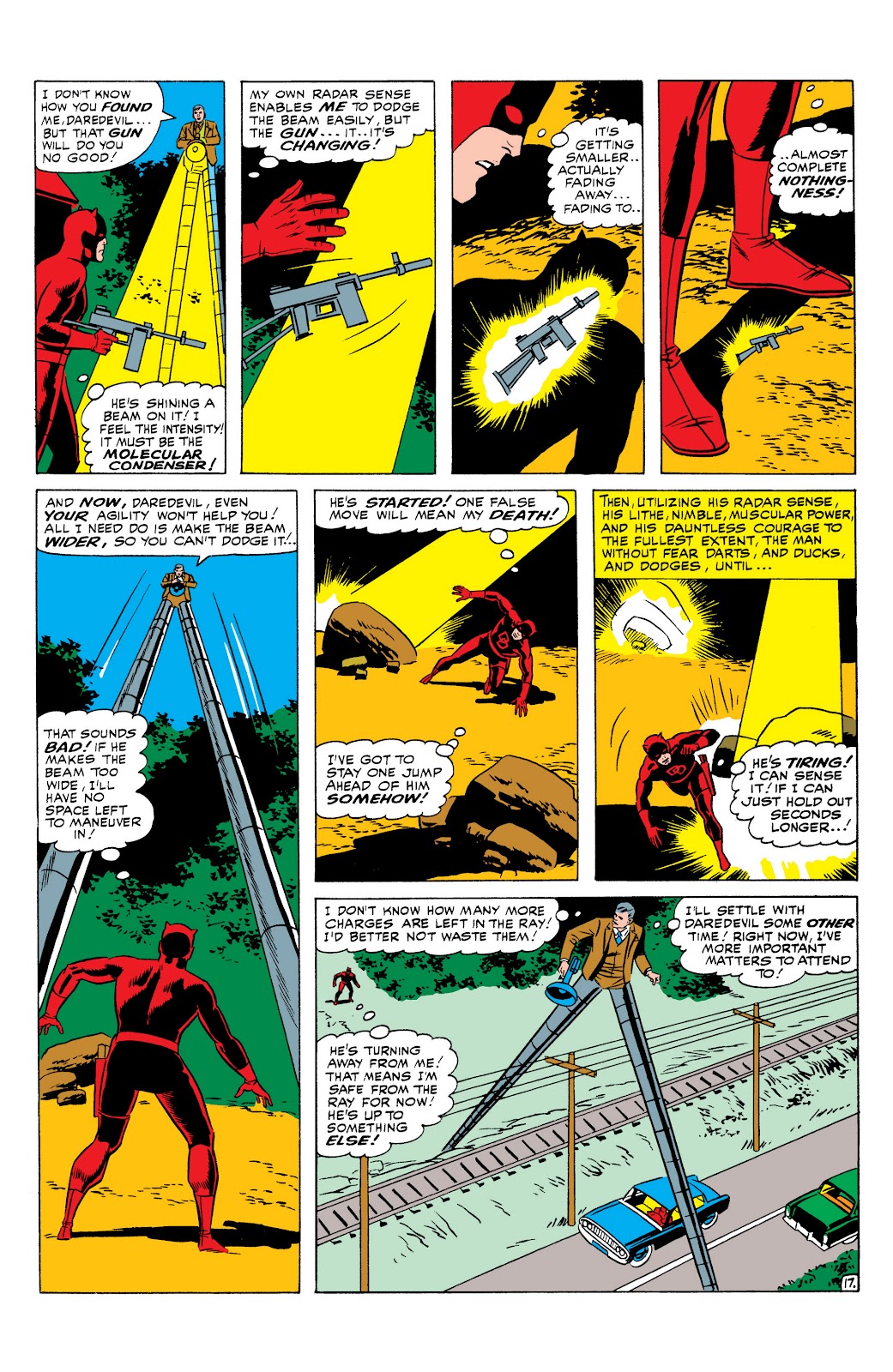 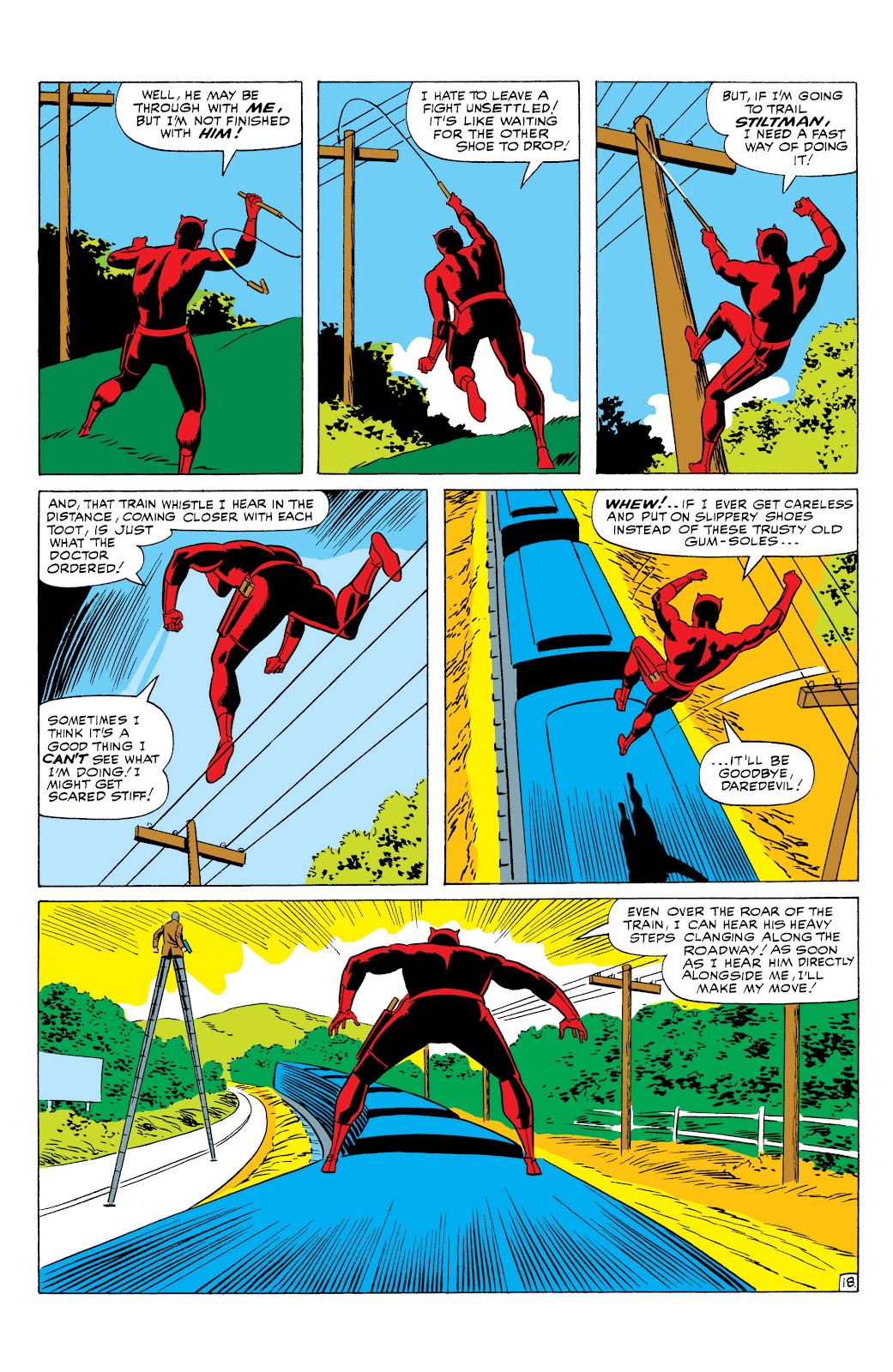 Taking the device and making a run for it in his stilts, Day is followed by Daredevil and in the battle, the shrinking ray is turned on Day who shrinks so small that he disappears from sight.

Returning to the Nelson and Murdock law office, Matt is confronted by Kaxton, but Murdock tells him that Day has dropped the law suit and they decide to let the whole thing go. After, when Karen presses the subject of Matt seeing Dr. Van Eyck to restore his lost vision, Matt tells her that it’s too much of a risk causing her to storm out of the room calling Matt a coward. 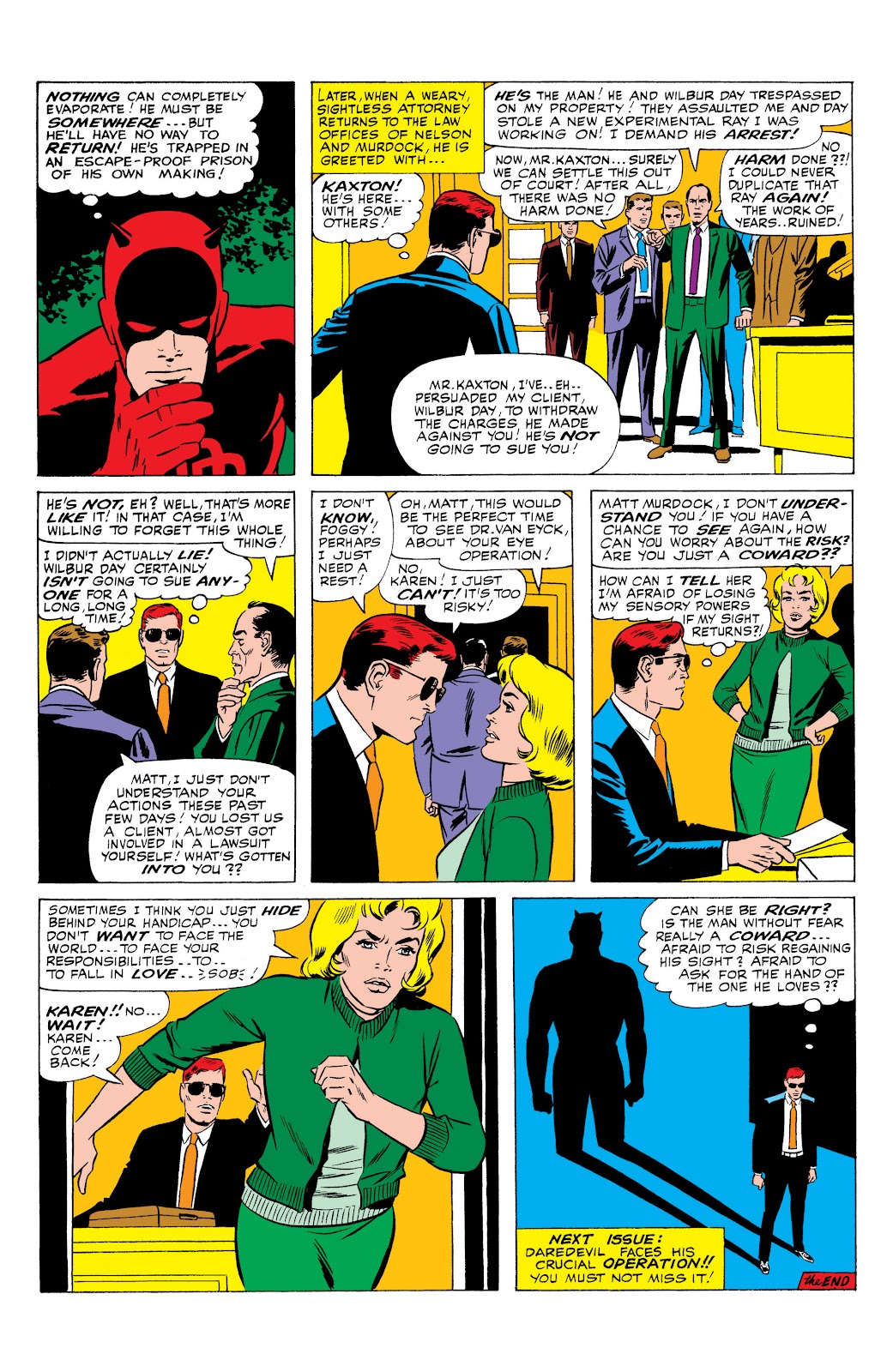 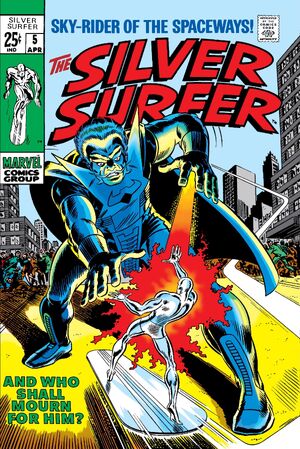 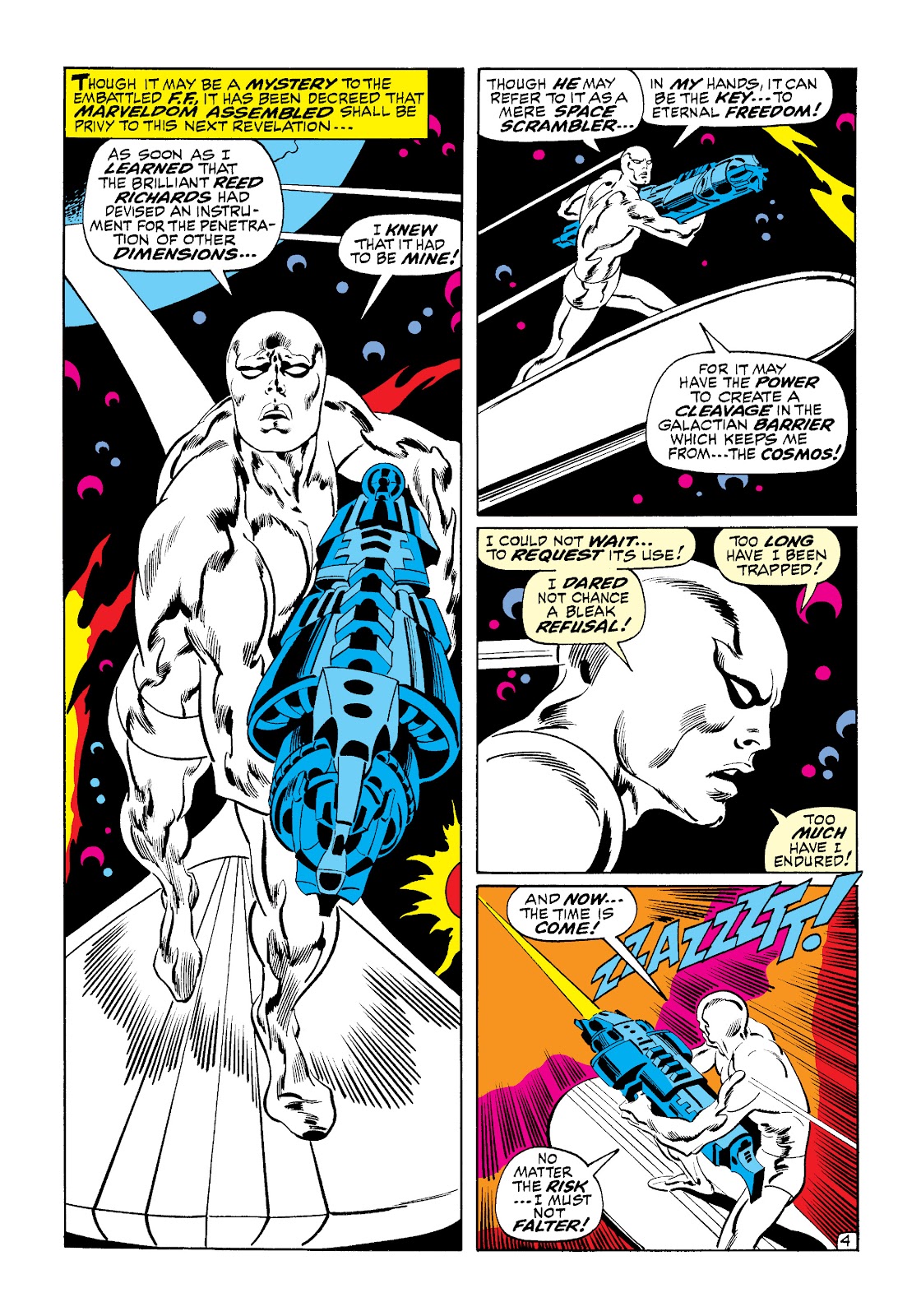 The Silver Surfer has stolen Reed Richard’s space-scrambler in hopes that he can use it to break through the barrier which Galactus has put it around Earth. 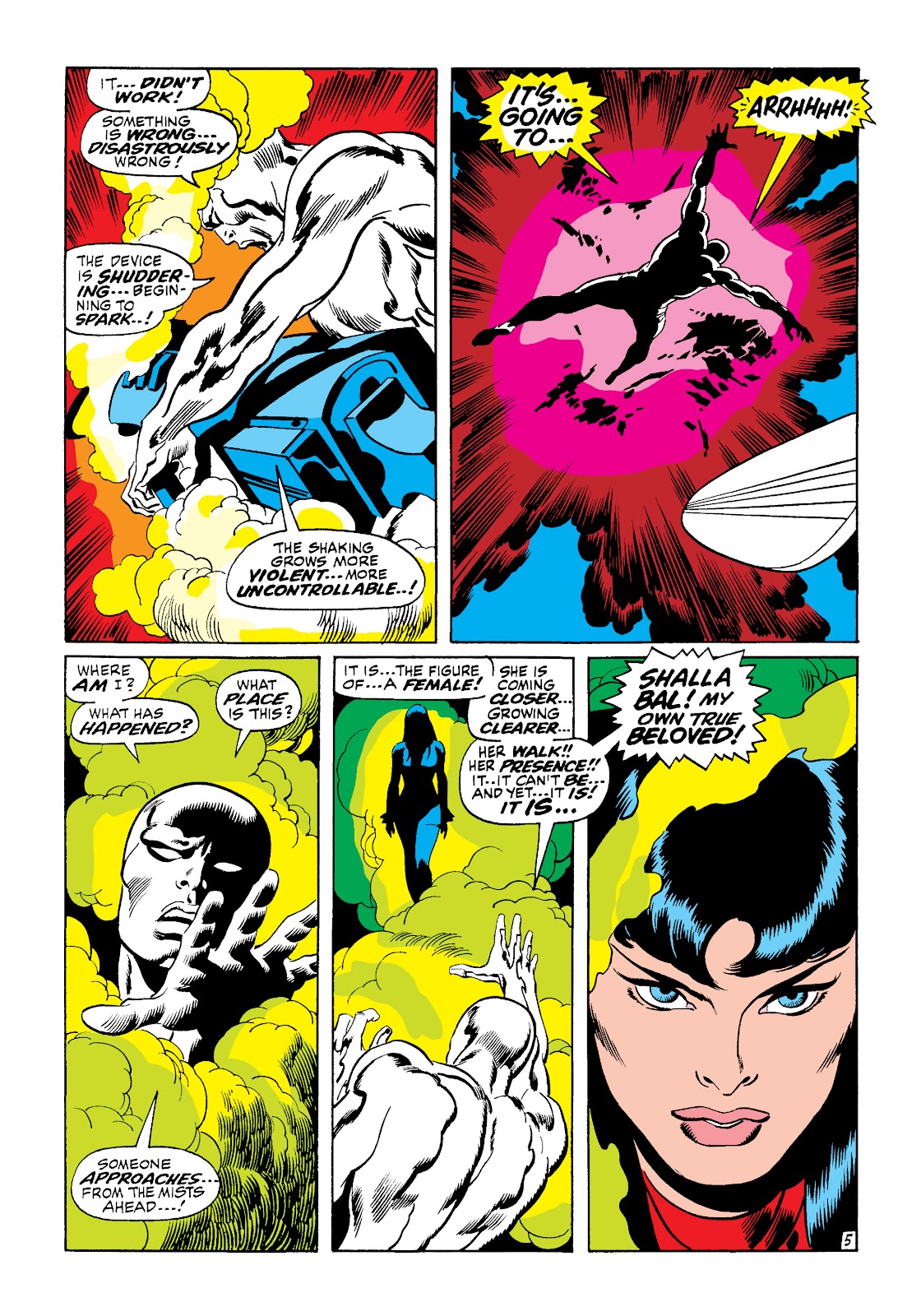 However, the Surfer is unaware that the device has not been perfected, and when he uses it, the device explodes knocking him unconscious and sending him back to Earth. He is recovered and brought home by physicist Al Harper, who sympathizes and can relate to the Surfers plight. 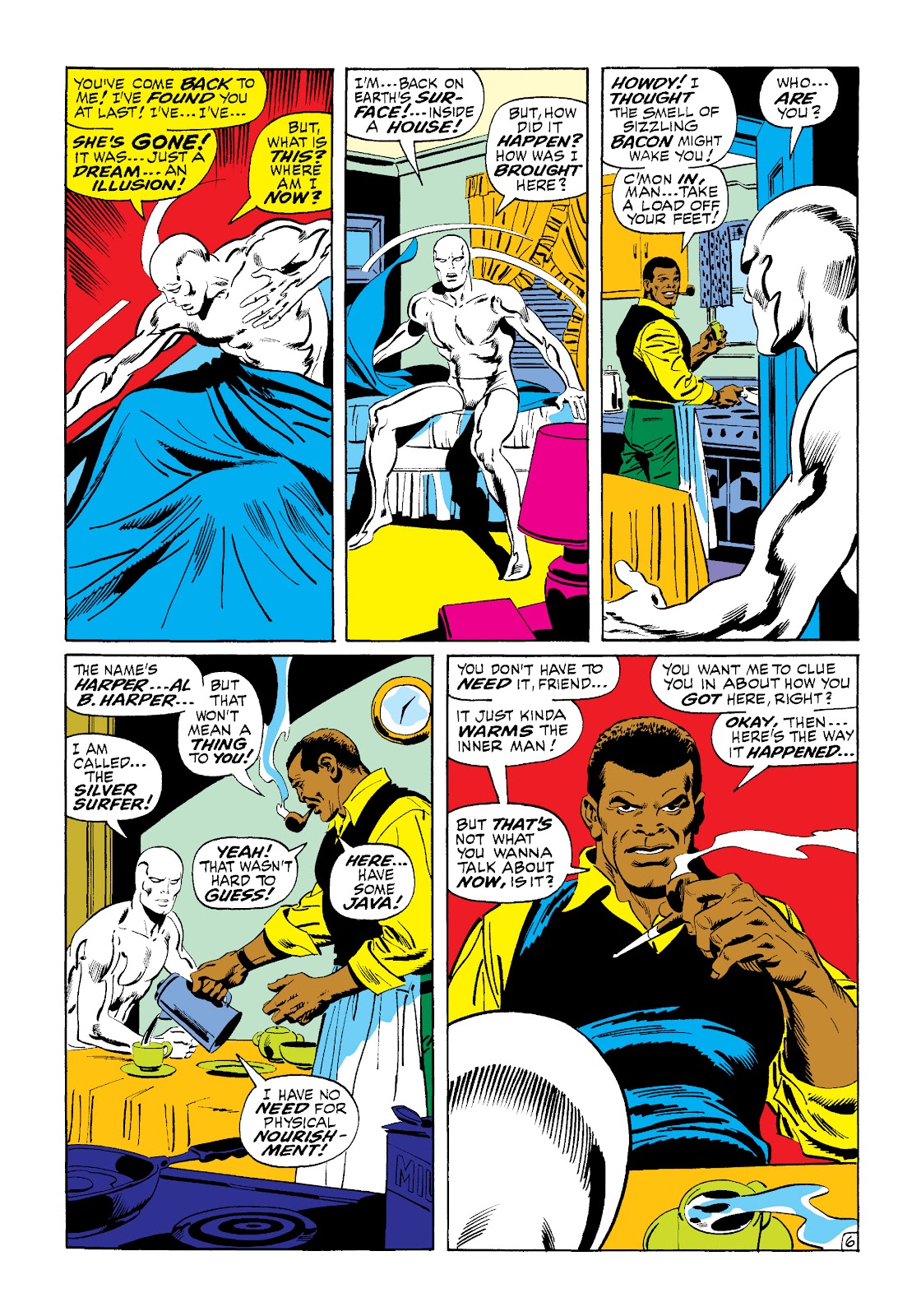 Harper agrees to help the Surfer, however he needs the money to create the devices necessary to breach the barrier. Dawning human clothing, the Surfer sets out to get the money that Al needs in order to conduct the work needed. 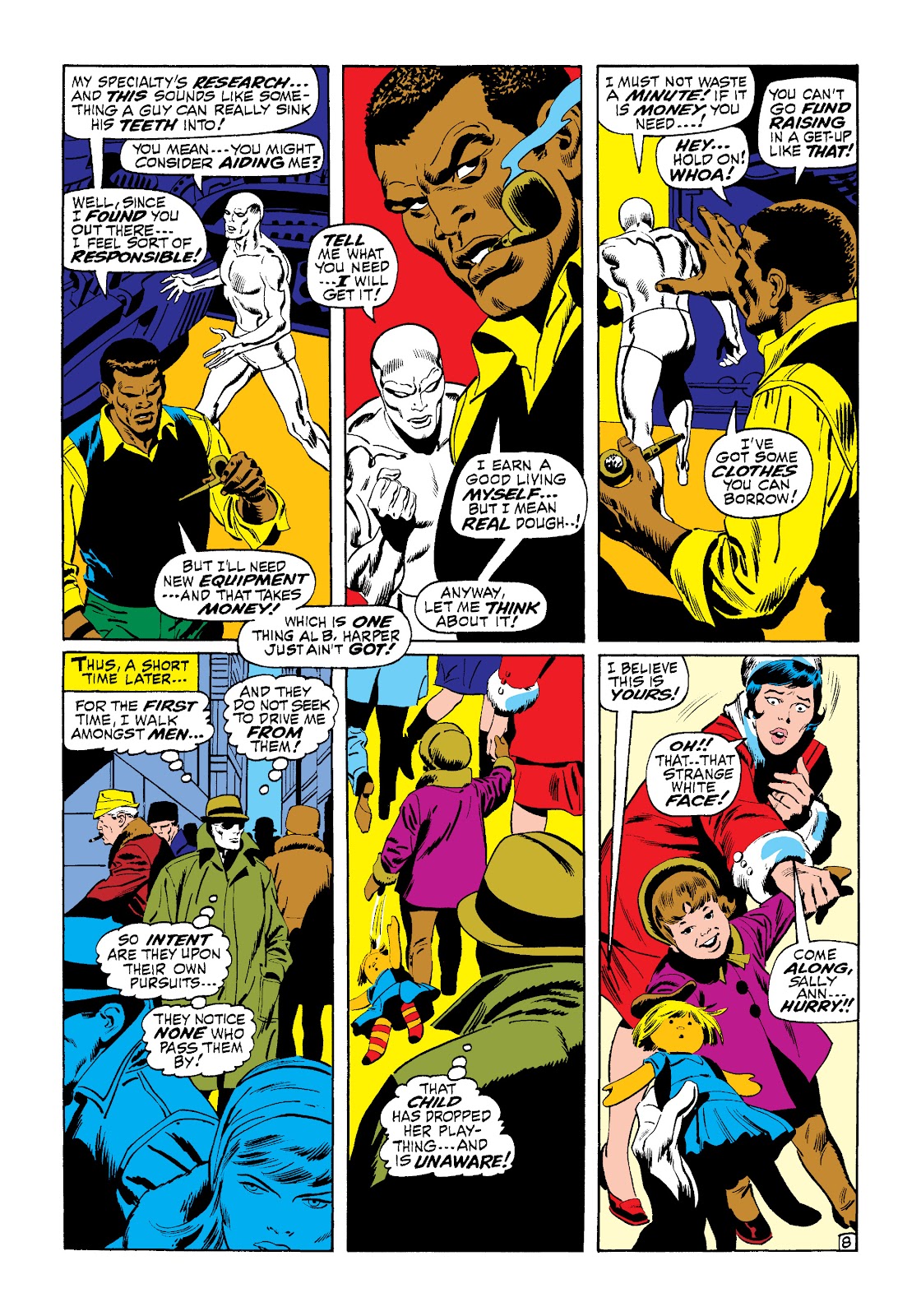 At first the Surfer breaks into a bank to take the money he needs, but realizes that doing so would be dishonorable when he’s spotted by the security guard. 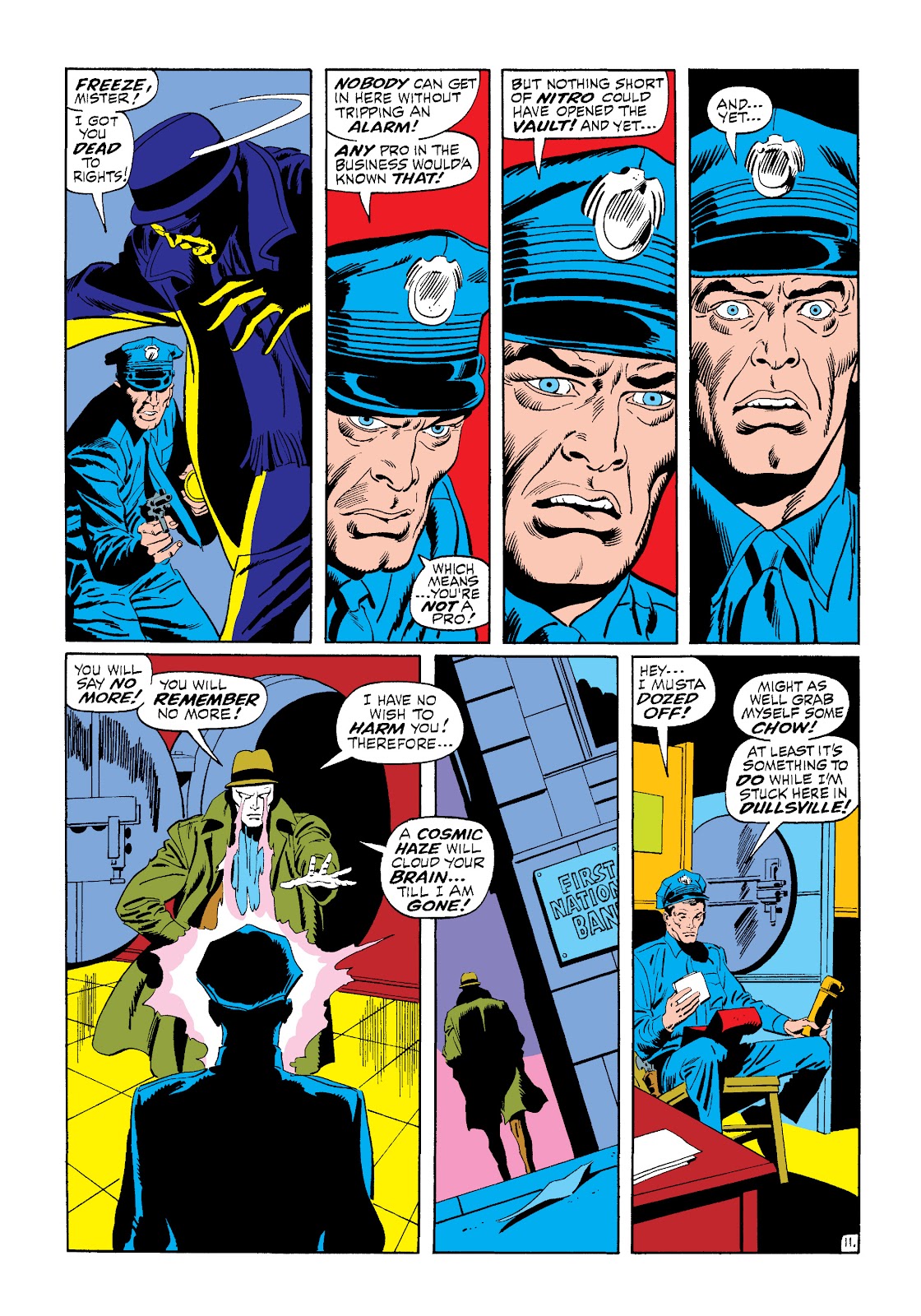 He then restores the damage and erases the guards memories of the incident before resuming his mission. Out in an alley he runs across a man who has been roughed up after losing all his money in an illegal gambling room after he realized the dice he was rolling were weighted. The Surfer decides that is how he will earn the money that he needs. Taken to the gambling room, the Surfer uses his cosmic powers to clean up and win more than enough money that is needed. 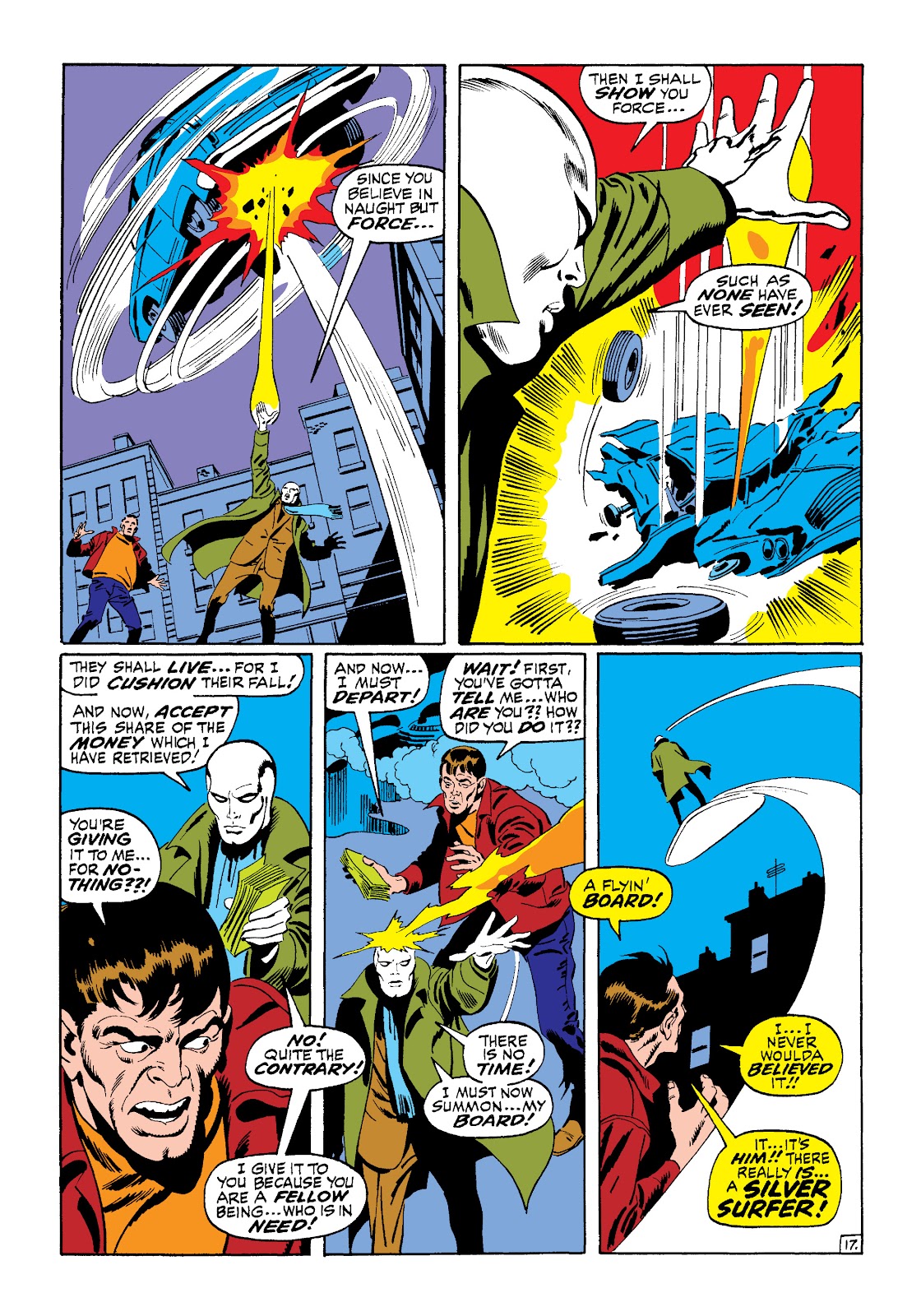 With the money, Harper is able to build the devices that the Surfer needs to get to Earth, however as it happens the Surfer is trying to free himself just as the Stranger has come to Earth to destroy it after his previous experiences on the planet leads him to believe the planet does not deserve to sustain life. 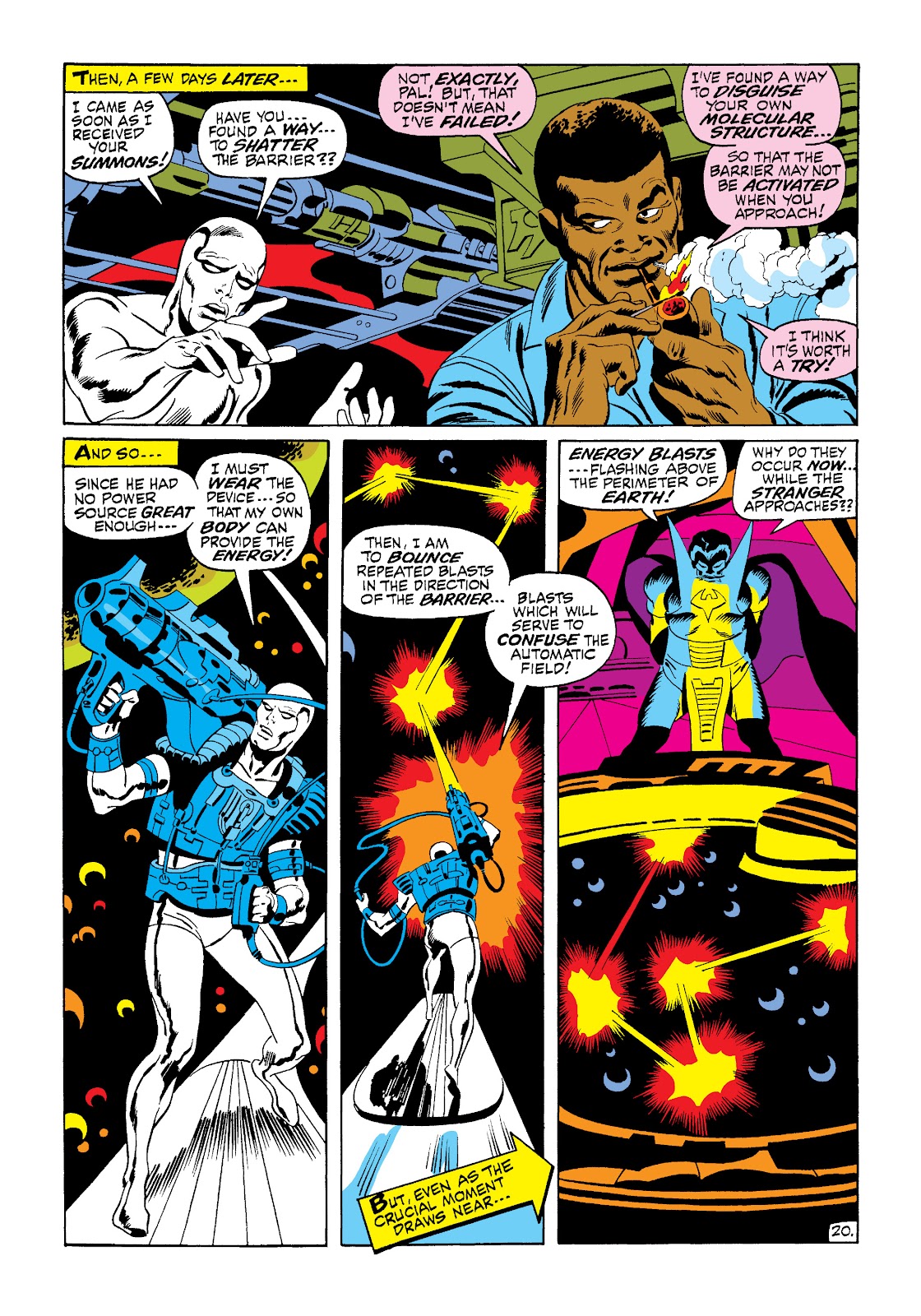 Detecting the Surfer’s presence on the Earth, the Stranger informs the Surfer of his plans to destroy the Earth with a Null-Life Bomb so that the Surfer can leave. 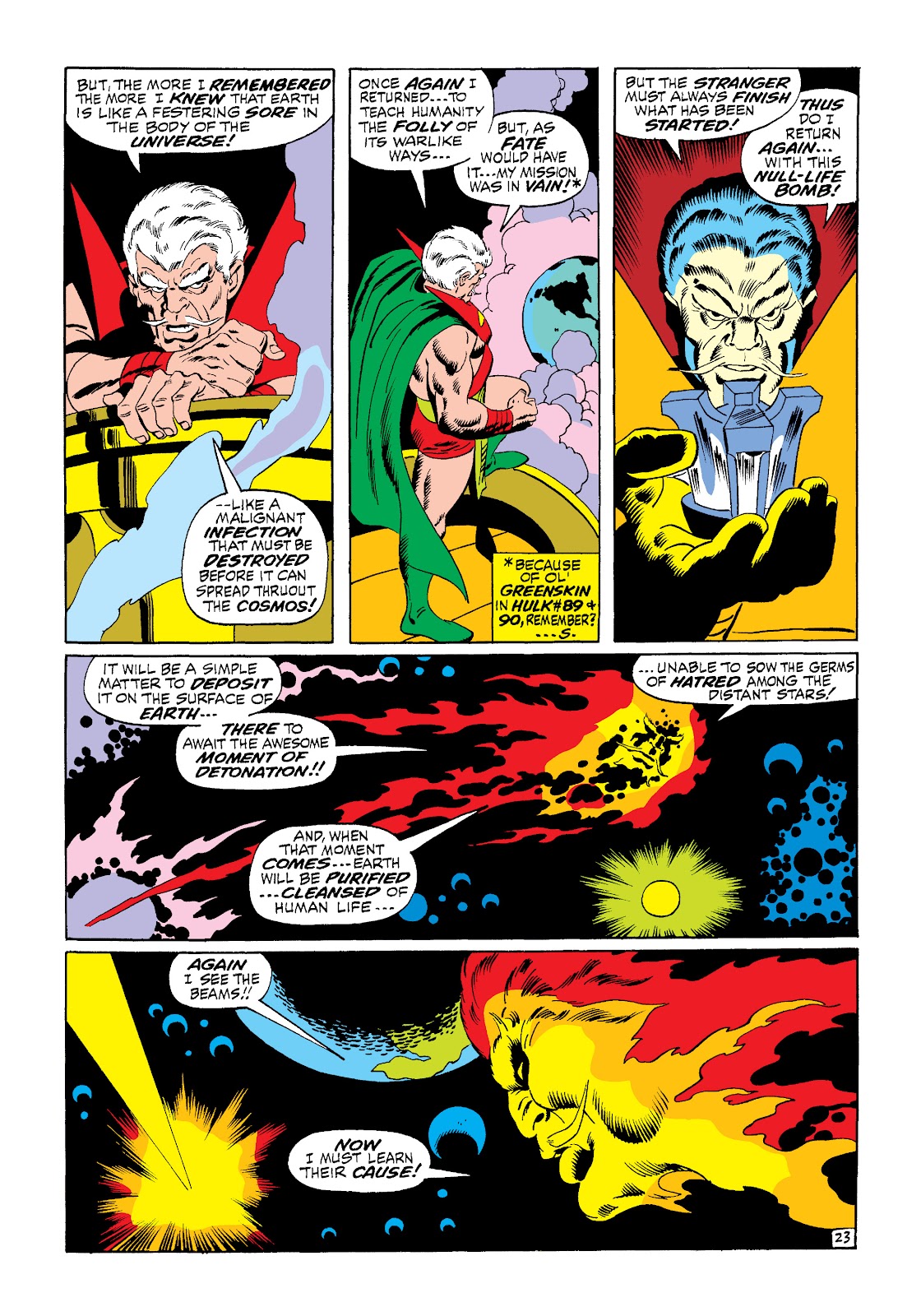 Not wishing the destruction of the Earth, the Surfer battles the Stranger, but is easily defeated. 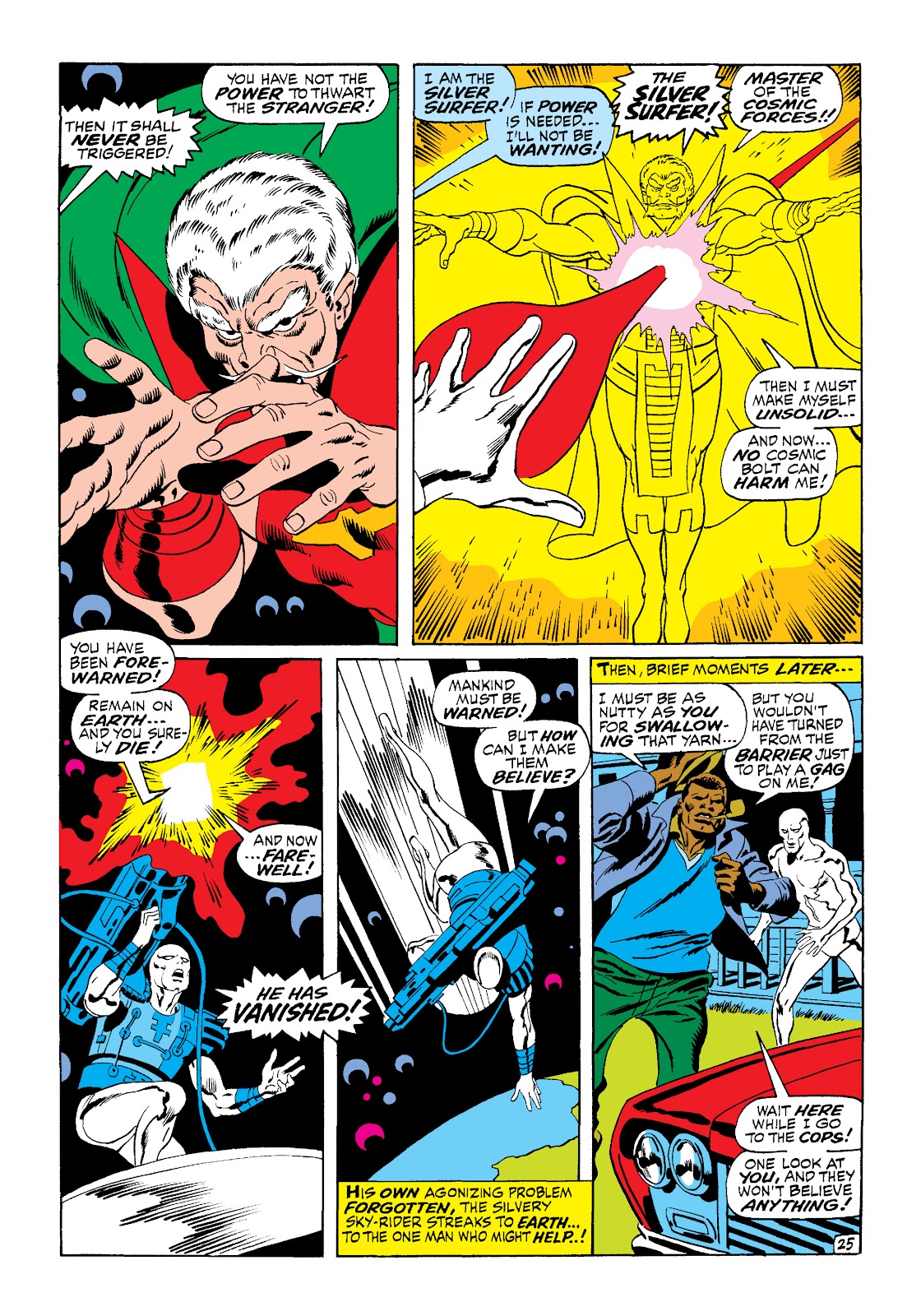 Deciding that he needs help in finding the bomb and defeating the Stranger, the Surfer gets Al to help him in tracking down the bomb with a radiation detecting device. 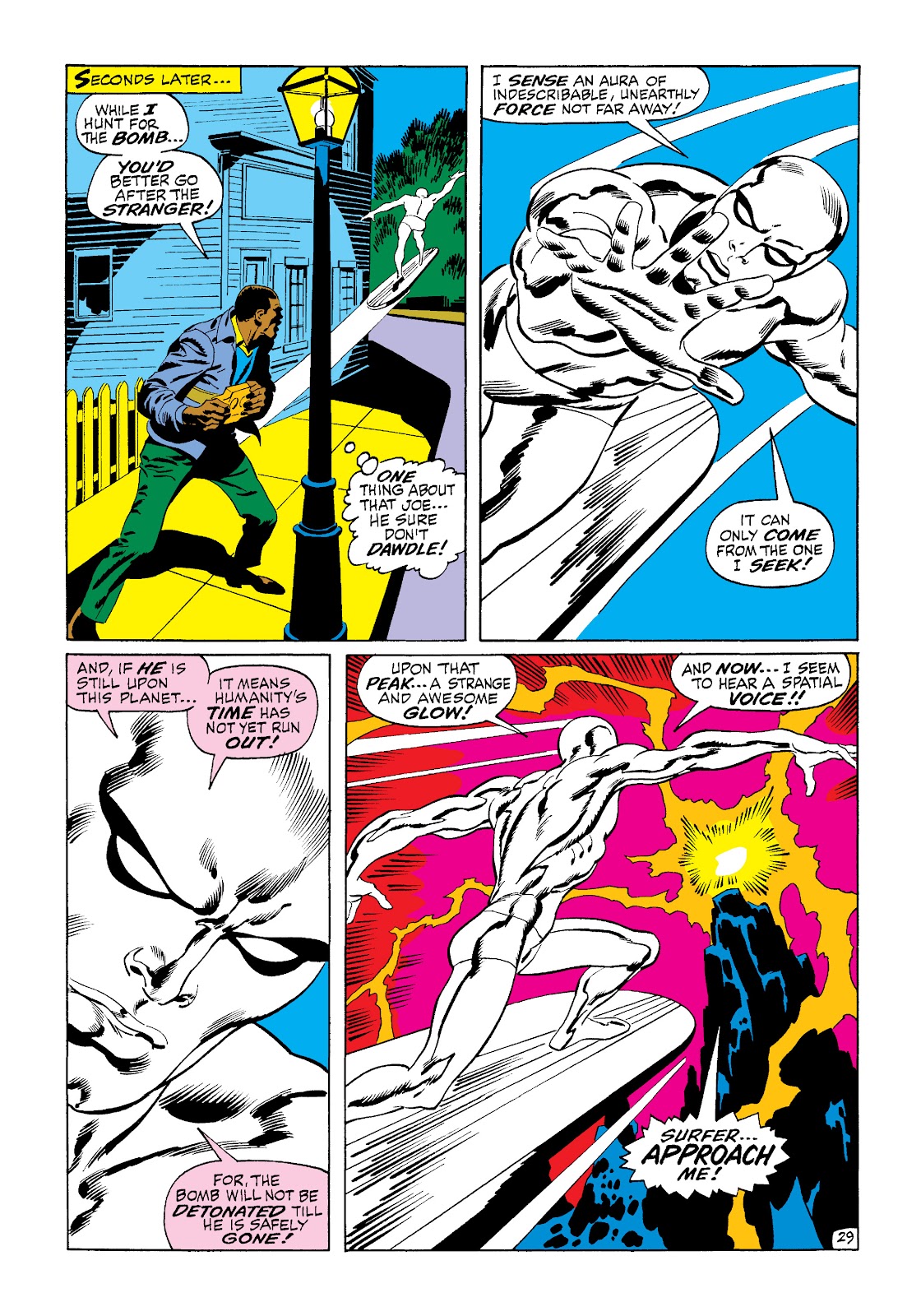