Sonja and Conan plot their escape from the vampiric siblings Uathacht
and Morophia, but Morophia intervenes and takes Conan to the breeding
pits, where he is forced to mate with the generations-inbred, pitiful,
deformed females who provide sustenance for the vampires. Uathacht,
fearing that too much of such things would break Conan’s mind, and
wanting the barbarian for herself, appears to Conan and Sonja and agrees
to cast a spell to weaken her brother in order to free Conan, so he may
willingly fulfill her hedonistic fantasies. Conan agrees, but only if
Sonja is set free as well, and while at first Uathacht agrees, she
reneges and Sonja is forced to kill her. Conan and Sonja attempt to flee
the Tower of Blood, but first encounter a group of the bat-like
Afterlings, who reveal that in Morophia’s weakened state, they are free
of his control and they show the two humans the way out. They intend to
burn the tower down, but soon, they encounter the vampire himself, who
transforms into the form of several of Conan’s past enemies, but Conan
and Sonja manage to start a fire to burn the vampire to a final death.
Unfortunately, they are trapped in flames at the top of the tower, and
as they make their way down the walls, they slip and fall, only to be
rescued by the Afterlings, who carry them to the cavern floor. Sonja,
believing she is acting in Conan’s best interest and wanting to spare
him from the bounty hunters who are chasing her, knocks him cold with a
rock and rides away.

Karm Karvus. So began a red slaughter with the two warriors carving a bloody

circle on the arena sands. Scores of Tsargol’s ghoulish soldiers fell under

their swords until, suddenly, a darkling mist swirled thorugh the arena, blinding

Thongor’s opponents. Freeing the girl, the three of them climbed a rope trailing

down out of the blackness and board the Nemedis.

The next day Kora, the girl rescued from the arena, was dropped off at her village, and

the others traveled onward to the city of Patangan, seeking to enter the crypts

beneath the ancient Altar of Yamath. Only there would they find the pillar of

Eternal Fire in which they must cast the Star Stone to reshape it. It was vital

the process not be interrupted, so, of course, a yellow druid and his company of

guardsman promptly came down to the sacred crypts with gifts for Yamath. Battle 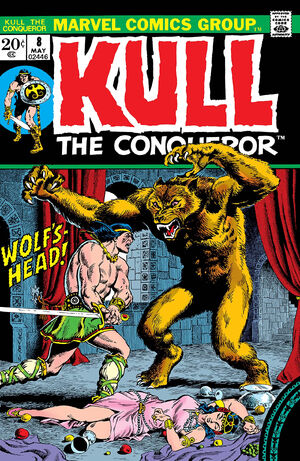 Kull’s ship is caught in a storm at sea, and manages to come aground on an uncharted island. Home of two warring cultures, and to one who walks with the curse of the Werewolf.