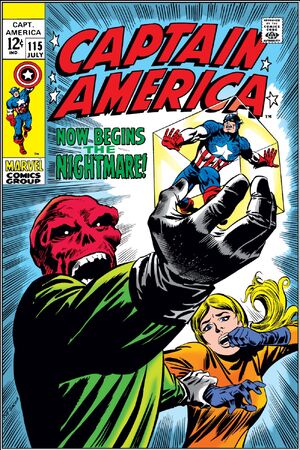 The Red Skull, once more wielding the Cosmic Cube, has materialized in the hotel room recently rented out by Captain America. Facing a frightened Captain America in his street clothes, the Skull wills the cube to modify Cap’s clothing into his uniform so that he can crush his enemy in the appearance he knows him in. Captain America takes an attempt at attacking the Skull, however he the former Nazi is only toying with him and allows him to punch an illusion before blasting Cap in the back. He decides to torment Captain America for a little bit before utterly destroying him, but first he explains how he managed to regain the Cosmic Cube: He explains that after the Cube disappeared (in Tales of Suspense #81 , in Italy in CAPC # 8 ) , it was unearthed when a volcano erupted in the Mediterranean and was recovered by a poor fisherman. Discovering the Cube’s power, the fisherman used it to make the people of his island all wealthy. When reports of the Cube’s resurfacing reached Exile Island, the Skull would order his minions to recover it. With the Cube back in his hands, the Skull would refuse to share in the power of the Cube with his fellow Exiles, he would torture them instead before teleporting off to get revenge against Captain America. With his explanation complete, the Red Skull would then use the Cosmic Cube to transport Cap away top some alien world.

Meanwhile, at SHIELD headquarters, Rick Jones is looking for Captain America and asks Sharon Carter if she has seen him. Although Sharon is busy with testing a new SHIELD weapon, she tells him that he hasn’t seen Captain America since she rejected his request that she leave SHIELD. Rick next goes to Avengers Mansion and find that neither Jarvis nor Yellowjacket has seen him neither. Remembering the resources he has, Rick gets in touch with his old gang of Ham radio enthusiasts the Teen Brigade and asks them all to keep a look out for Captain America and report back any sightings. However despite all of this, Rick can’t help but shake the idea that Captain America is abandoning him as a sidekick because Cap thinks he doesn’t have what it takes to replace Bucky.

Elsewhere, the Red Skull continues to use the Cosmic Cube in ways to drive Captain America mad, hurtling the hero from plane of existence to different worlds. Ultimately he shrinks Cap down and terrorizes him back in his hotel room until he finally decides to come up with the ultimate revenge scheme ever: Searching Cap’s mind for the person who means the most to the Avenger, the Red Skull uses the Cosmic Cube to teleport Sharon Carter in the room. Then, in the ultimate jest to make his revenge complete, the Red Skull uses the Cube to switch bodies with Captain America. Seeing Steve as the Red Skull, she seeks protection from the Skull in Cap’s body. When Cap tries to explain to Sharon what’s happened all she can believe is that the Red Skull has gone mad. 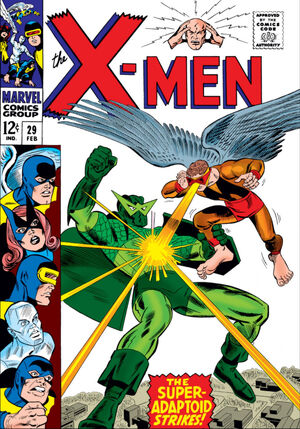 All the X-Men have gone out in their civilian guises to go skating on a nearby pond. When Warren manages to capitalize on Jean’s attention, Scott slinks away and declines Jean’s offer for him to join them, telling her he forgot his skates at home. Wandering into the woods, Scott broods over how he loves Jean but cannot bring himself to express his emotions because he has yet to learn how to control his optic blasts. Making an attempt to try, Scott removes his ruby quartz glasses and tries to control the destructive force of his blasts. However, Scott fails, and is even more disappointed to find that they are stronger than ever. In a fit of rage, he unleashes them at full strength against the side of a mountain causing a rock fall. Realizing what he has done, Scott flees the scene before he can get caught in the falling rocks.

Scott’s blast also manages to revive the Super-Adaptoid, still inert following his last battle against Captain America. The Adaptoid decides to go out into the world once more and see what force awoke him. Meanwhile, the X-Men decide to return to the mansion, except for Bobby, who has had almost no luck skating. Left alone, he changes into his Iceman form and finds that skating is much easier. Witnessing this, the Super-Adaptoid realizes that there are other super-powered beings on Earth other than the Avengers and attempts to approach the young X-Man to duplicate his powers. Approaching the boy quietly, the Adaptoid gives himself away when his heavy body breaks through the ice. Startled by the Super-Adaptoid, Iceman learns of it’s true nature and freezes it in a block of ice and flees the scene to get the others. Realizing that the boy can lead it to more super-powered beings, the Super-Adaptoid breaks free and begins following Iceman’s path.

Iceman rushes to the X-Men’s base where he finds Marvel Girl, Angel and Beast and tries to warn them of the Adaptoid. The group thinks that Bobby is joking. Then, Scott shows up from the pond with Bobby’s clothing, he tells the others that he saw no robot either, satisfying in the other X-Men’s minds that this is simply another one of Bobby’s pranks.

The X-Men are called by the Professor to begin a training session. However, Mimic refuses to participate in “hoop jumping” for the Professor. When Cyclops demands that Mimic show respect, the two come to blows which leads to a fight between Mimic and the other X-Men. The Professor breaks up the fight, and decides that with the looming threat of Factor Three coming, he has no time for fighting within the X-Men and orders Mimic to leave the school as soon as possible. With the Professor and Mimic’s departure, Scott thinks about the worries the Professor has and how his fears over control of his powers are selfish in comparison. Meanwhile Xavier begins a new experiment in his lab near the locked door that contains his greatest failure.

The X-Men have decided to practice outside by playing football with each other. The game is cut short when the Super-Adaptoid has finally caught up with Iceman and attempts to examine the X-Men. Going for Jean first, the creature is fought off by Cyclops, Iceman, Beast and Angel. The Adaptoid, with its copies of the Avenger’s powers, manages to stave off the attacks. He then uses a gas filled arrow to fell the X-Men, just as Mimic is leaving the school. Witnessing the battle, Mimic decides to get into the middle of things.

The two fight each other but the two super-beings find themselves to be an equal match. Deciding that he can gain the upper hand by copying Mimic’s duplications of all the X-Men’s powers, the Super-Adaptoid attempts to copy Mimic’s abilities. This causes an energy backlash that sends both of them crashing to the ground, with their powers being nullified. While the now human Calvin Rankin is saved by the Angel, the now powerless Adaptoid smashes into the frozen lake vowing that mankind has not seen the last of it.

With the battle over, Mimic tells the rest of the group that he is sorry for how he’s acted in the past and that he has realized the true value of friendship. 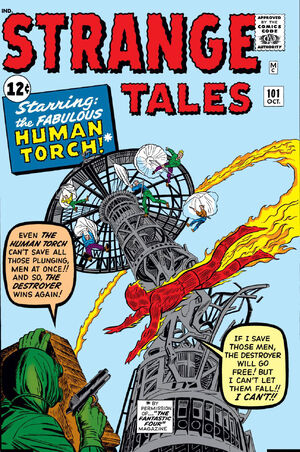 An empty spaceship arrives on Earth, confusing everyone. The ship lands and stays for a time before leaving, disappointed that the humans couldn’t realize that the ship itself was alive.