ASHTON GARDNER DYKE what a bloody long day it's been LP

Ashton, Gardner and Dyke were a power rock trio, most popular in the early 1970s. 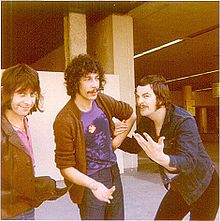 Ashton was invited to join the Liverpool beat group, The Remo Four as organist/vocalist,
whilst Roy Dyke became the group’s drummer, having joined them in 1963.
Their best work came in 1966 when they released their album Smile!. Before their break-up in 1968, they backed George Harrison on his album Wonderwall Music.

Ashton and Dyke then joined forces with the bass guitar playing Kim Gardner, who had previously played in minor British groups, The Birds and The Creation. The triad simply called themselves Ashton, Gardner and Dyke. Mick Liber formerly of Python Lee Jackson played lead guitar with the group.

They released their first single “Maiden Voyage”/”See The Sun In My Eyes” on Polydor Records in 1969, but it flopped. However, their next single release on Capitol Records,
made them household names. It was entitled “Resurrection Shuffle”. They
poached their brass section, Lyle Jenkins and Dave Caswell, from
Birmingham band Galliard. It entered the UK singles chart on 16 January 1971, had a chart life of 14 weeks and peaked at Number 3, and reached number 40 in the US Charts. This one-off triumph ultimately garnered for them the tag of one-hit wonder.

Equally unfortunately, their follow-up single “Can You Get It”
lacked the general boisterous appeal of “Resurrection Shuflle”, and
failed to chart. Nevertheless, Ashton Gardner and Dyke persevered and
recorded three albums (see discography below).

Their last recording together was a collaboration with Jon Lord on the soundtrack for a b-movie called “The Last Rebel“, starring former gridiron star, Joe Namath. Ashton also appeared on Jon Lord’s first solo album Gemini Suite in 1972.

After their demise, Tony Ashton went on to play for Medicine Head, and was briefly in Family before teaming up again with Deep Purple’s Jon Lord in Ashton & Lord. Later still he appeared with Lord and Purple’s drummer Ian Paice as Paice, Ashton & Lord. Dyke and then Gardner joined Badger. 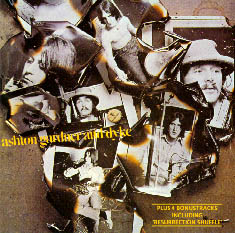 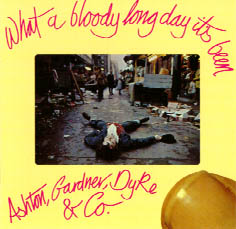 Something of a supergroup, Kim Gardner had been in The Birds
and Creation prior to joining this band and Tony Ashton and Ron Dyke had
been in The Remo Four.  Their debut album lacked a certain amount of
verve but was liberally laced with R&B influenced compositions and they scored an
unexpected hit with the goodtime rock ‘n’ blues song Resurrection Shuffle
in 1971.

Their second album explored a range of soul-flavoured rock styles with lyrics that often
reflected on the evils of war. Eric Clapton and George Harrison
guested on one of its better moments, I’m Your Spiritual Breadman and Chicken Shack‘s Stan Webb
played guitar on another, Let It Roll.   The final album was less
political and more personal than the predecessor. Musically we’re talking blues-rock here
with the occasional track which veers more towards jazz-rock. 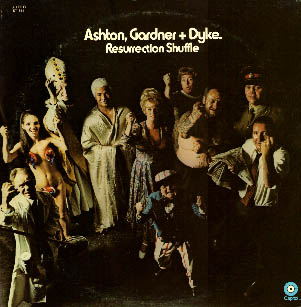 After their demise, Tony Ashton went on to play for Medicine
Head and was briefly in Family
before teaming up with Deep Purple‘s
Jon Lord in Ashton and Lord.  Kim Gardner was later in Badger.

Though chiefly remembered for their UK No.3 hit, “Resurrection Shuffle“,
the careers of Ashton, Gardner & Dyke stretched back a long way
before they achieved that sole international smash in 1971.

Bassist Kim Gardner (born 27 Jan 1946, Dulwich, London) began his musical adventures in
1961 in the Middlesex based R&B outfit The Birds along with future Rolling
Stones guitarist Ronnie Wood, vocalist Alistair McKenzie, guitarist Tony Monroe
and drummer Pele McDaniels.  They made three singles for Decca between 1964 and 1965,
“You’re On My Mind“/”You Don’t Love Me“,
“Leaving Here“/ “Next In Line” and
“No Good Without You Baby“/”How Can It Be”
and also appeared in the horror movie, “The Deadly Bees” (as
well as having a legal battle with the American Byrds) before splitting
in late 1966 (though a further single, “Say These Magic Words“/”Daddy
Daddy“, was released, credited to Birds, by Reaction
at the same time).  Gardner then teamed up with guitarist Eddie Phillips, vocalist
Kenny Pickett and drummer Jack Jones in The Creation and scored minor
chart success with the singles “Making Time“/”Try
And Stop Me” (Planet 116, No.49 July ’66) and “Painterman“/”Biff
Bang Pow” (Planet 119, No. 36 November ’66) though their further singles,
“If I Stay Too Long“/”Nightmares”
(Polydor 56177) and “Life Is Just Beginning“/”Through
My Eyes” (Polydor 56207), both failed to chart as did two other singles,
featuring Gardner’s old Birds colleague Ronnie Wood who’d replaced
Phillips, “How Does It Feel“/”Tom Tom”
(Polydor 56220) and “Midway Down“/”Girls Are Naked”
(Polydor 56246).  With the band splitting in mid-’68, Gardner, along with Wood, Twink
and Jon Lord recorded as Santa Barbara Machine Head before teaming up
with Ashton and Dyke. 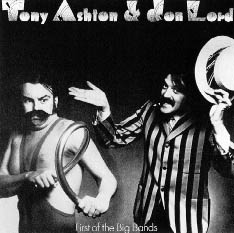 Organist/vocalist Tony Ashton (born 1 March 1946, Blackburn) began his career in North
West England beat group The Executives, who, whilst he was with them,
released two singles, “March Of The Mods“/”Why Why
Why” (Columbia DB 7323) and “Strictly For The Beat“/”No
Room For Squares” (DB 7393).  He was also briefly a member of The
Collage Boys and The Mastersounds before, in March 1965,
accepting an offer from Liverpool group Remo Four.  The band’s
drummer was Roy Dyke (born 13 February 1945, Liverpool) who’d been with the group since
1961 and had released two singles prior to the arrival of Ashton, “I Wish I
Could Shimmy Like My Sister Kate“/”Peter Gunn”
(Picadilly 7N 35186).  Together with bassist Phil Rogers and guitarist Colin Manley
they played in Hamburg for almost two years and also released a single “Live
Like A Lady“/”Sing Hallelujah” (Fontana TF 787)
before splitting in early 1968, by which time Ashton and Dyke had met up with Gardner and
the trio decided to form their own outfit.

Their first job was to provide backing on one of P.P.Arnold’s tours after
which, in late ’68, they secured a deal with Polydor Records who released the single
“Maiden Voyage“/”See The Sun In My Eyes”
(BM 56306) plus the threesome’s self-titled debut LP (583081) which included the single’s
A-side.  A heavy touring schedule throughout most of 1970 paved the way for their
second album, “The Worst Of…“, by which time they’d signed
to Capitol Records (EST 563), which featured contributions from guests like George
Harrison, Eric Clapton, Stan Webb
and P.P.Arnold.   Later in the same year, they released the single
“Resurrection Shuffle“/”Hymn to Everyone”
(CL 15665) which promptly shot to No.3 in the UK charts, spending over three months in the
Top 75, as well as hitting No.22 in Germany and No.40 in America.  However, this
proved to be their only UK hit as the follow-up, “Can You Get It“/”Delirium”
(CL15684) failed to register (though it did hit No.44 in Germany). Likewise, their third
album, “What A Bloody Long Day It’s Been” (EAST 563) also
failed to chart and so, after providing the soundtrack, alongside Jon Lord, for the U.S.
movie, “The Last Rebel” (Capitol 062 80964), the trio disbanded
in early 1973. 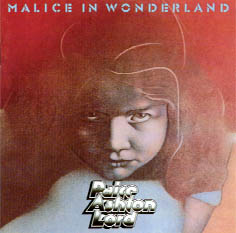 Tony Ashton had also worked with Green Bullfrog, Mike Hurst,
Third World War, Tucky
Buzzard and Jon Lord, whilst with Gardner and Dyke and he
continued session work by helping out the likes of Family,
Chris Barber, Jerry Lee Lewis and Longdancer.
His first solo single “You, Me And A Friend Of Mine“/”I’m
Dying For You” (CL 15702), taken from “The Last Rebel”
LP, had come out in early 1972 and he followed it in 1973 with “Celebration“/”Sloeback”
(Purple PUR 109).  He also continued working with Jon Lord appearing on the single,
“We’re Gonna Make It“/”Band Of The Salvation Army
Band” (PUR 121) and LP, “The First Of The Big Bands”
(3507).  He also released two further solo singles, “Resurrection
Shuffle“/”Ballad Of Mr. Giver” (Oyster OYR 101)
and “The Crezz“/”Somethin’ Something”
(Handkerchief Hanky 14) as well as working with Chicken Shack,
John Entwhistle and Medicine Head before forming PAL
with Lord and Ian Paice, releasing the 1977 LP, “Malice In Wonderland”
(Oyster 2391269), and taking part in the Wizards
Convention project.   Since then he’s concentrated on producing though
he did appear at the all-star Concert For Kampuchea in 1979.  Roy
Dyke joined Badger
and appeared on their LPs, “One Live Badger” and “White
Lady“.   He also worked with Chris Barber, Family
and Medicine Head, as well as Pat Travers, and continued
as a leading session drummer.  Kim Gardner joined Badger
for their second LP and then worked with the likes of Mike Hugg, Chris
Barber and Dwight Twilley before becoming a permanent member of Billy
Burnette’s backing group.